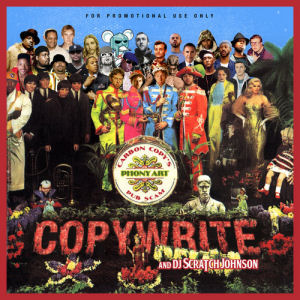 This might be the wrong time to admit it, and sacrilege in the hallowed halls of music criticism, but growing up I was NOT a big fan of the Beatles. They had broken up before I was even born, and I came of age after John Lennon had been assassinated, so from where I sat as a youth the venerated status they held was completely irrelevant. Rappers were sampling James Brown, not Paul McCartney, and the nostalgia of my parents’ generation for these insectoids seemed too closely related to Elvis Presley for my liking – and we all know what Chuck D had to say about Elvis (and John Wayne). In later years my attitude has softened a bit, and while I still don’t own any of their albums (nor have a desire to), I can at least recognize the historic importance of albums like “Sgt. Pepper’s Lonely Hearts Club Band” in the music world. Greatest album of all time though? Nah. If I had to pick one today it would probably be a Public Enemy or Run-D.M.C. release, or somebody of their ilk. That’s why I’ve passed up reviewing Beatles mash-ups like “The Grey Album” up until now – they’re just not my cup of tea.

“Carbon Copy’s Phony Art Pub Scam” is being distributed free, because if you can imagine the cost of clearing samples for clearing any part of the Beatles’ catalogue let alone “the greatest album of all time,” well that’s just not going to happen – let alone for an indie underground emcee like Copywrite operating on a shoestring budget. That’s not to say that giving it away for free exempts them from the current owners of the catalogue (formerly it was Michael Jackson) as you can still be pursued litigiously for affecting the value of a work even if you don’t profit from it. Copywrite and Man Bites Dog Records may just skate on this one for the very same reason the Beatles were irrelevant to me growing up – underground indie hip-hop is irrelevant to the publishers of their music. Threatening the (in this case) ironically named Copywrite would gain them nothing except perhaps for getting this album taken offline.

Now I’ve had just enough exposure through the years to recognize most of the elements of “Sgt Pepper” that are used here, not the least of which is Copywrite’s playful remake of the cover artwork itself. Individual songs like “Being for the Benefit of Mr. Kite!” are reinvisioned as “Being for the Benefit of Mr. Write!” Consequently Copywrite flows over the beat, although the merits of doing so are dubious at best, and not owing in any way to Copywrite’s lyrical talents (which are certainly not inconsequential). “Mr. Kite” is a whimsical song based entirely upon a circus poster purchased by John Lennon, and as such has a carnival arrangement of organs and pipes which are not really suitable for flowing over, nor does the rhythm and tempo lend itself to constructing suitable verses to match the beat. Copywrite gets an A for effort for going to such great lengths to stick to the script, but the song is a chore.

Other songs lend themselves to the experimentation a little better. “With a Little Help from My Friends” turns easily into “High With Friends,” and even more apt is “I Love Lucy” – which goes high into the sky with no diamonds required. Copywrite claims to have not showered in 40 days as he picks up the pace and gets further and deeper into the song, with samples of “The Sounds of Science” by the Beastie Boys blended in to enhance the presentation:

“Picture yourself in a, ditch with no help
As a, glitch in this Matrix unfixes itself
The fabric of time, unravels one thread at a time
to unbaffle our prim-itive minds
I’mmmmm, living in time
filled with limits, ’til the minute we die”

Some things translate even better than that though – for example “Within You Without You” transforming into the well named “Sitar Happens.” The Indian instrument brought to new fame for U.S. audiences by this song is well suited to the rearrangement of Copy and his partner DJ Scratch Johnson, who I like to imagine suggested the “Dewey Cox” movie samples. Scratch lives up to the name with cuts and slices throughout, giving the needed hip-hop edge to these revisited Beatles cuts they otherwise lack. At the same time though, the very Beatle-ness of some songs is overwhelming, particularly for an album which has been described even by its ardent supporters as “psychedelic” – which makes having anything like a consistent construct over tracks which repeatedly change tempo like “Good Morning Good Morning” difficult at best – though the MC Eiht sample to open “Good Mourning (Wake Yo Punk Ass Up)” still induces a good chuckle.

In summary I think it’s fair to say I’m a bigger fan of Copywrite’s interpretation of “Sgt Pepper” than I am of the album itself or the Beatles in general. Despite being thought of as a fairly serious and battle-minded underground rapper, he approaches this unusual album revisit with the right sense of whimsy for songs like “Can’t Come Plain” (his version of the famous “Getting Better” you’ve heard in a million TV commercials) to work perfectly.

“The thirty trillion dollar wordy brilliant scholar
Heard he spilled a vodka bourbon on a surgeon
during a lobotomy, onomatopoeia
he a problem need a home tutor
No neuter could remove me
Smooth nuts, old schooler like DEEZ NUTS
Roll buddha in TREE TRUNKS
No Buddha in Je-sus…”