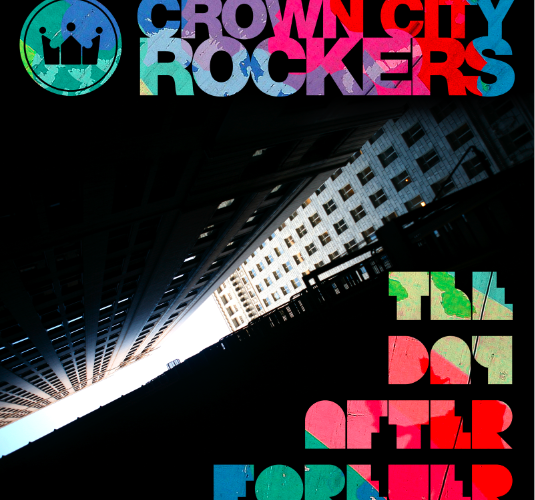 Crown City Rockers did not send RapReviews their recent album, “The Day After Forever.” They instead sent “The Day After Forever (album sampler).” I am not sure why one would send a music reviewer an album sampler. Music sites write for potential listeners, and people do not listen to album samplers, they listen to albums. I liked what I heard on the sampler well enough, but I only heard a 5 song, 16 minute tease, not a full record. For all I know, the rest of “The Day After Forever” is garbage. Or transcendent. Still there is some use in reading this review as 5 track reviews posing as an album review. So no more griping. Let’s dig in to the 5 tracks Crown City Rockers really want you to hear:

“Soul” – The rapping on this track stands out neither as particularly gifted nor lackluster. The chorus, which features the MC’s singing “Soul! You got it! You got it!,” is kind of lame and uninventive but not gut-wrenchingly so. What stands out most on “Soul,” though, is the eerie, minimalist synth hook winding its way through the track’s trance-ish drums like an awesome version of the music in the underground levels of Super Mario Brothers.

“Kiss” featuring Silya – I really hate it when rappers put a female R&B singer on the chorus. It sounds like C&C Music Factory. Also, taking a verse to list all the girls you’ve been with is weak sauce. It’s lazy because you can just make up names that rhyme, and it’s too much like “Mambo Number 5.” Still, these drums are pretty wicked – not at all typical hip-hop drums, more some bongo-ish Conga shit, and the rappers do a good job of flowing over atypical percussion.

“Astroshocks” – I don’t know what kind of dance an “Astroshock” is, but, whatever it is, it’d be a blast to do to this song. Again, a unique video-gamer hook over rapid fire drums diverging from normal hip-hop boom-bap. And the MCs flow with a lot more confidence than on the other tracks.

“Go Away” – This intermittent drum roll under electro-violin is pretty hot, but the song goes nowhere lyrically. To be sure, the Rockers are bent out of shape about someone, but instead of taking this chance to engage in some compelling story telling, they just whine without direction for 4 minutes. Still, they do sound sincerely expressive, which is always refreshing.

“Clap Your Hands” featuring Aima – I’m sick of rappers telling me what to do. I don’t really want to clap my hands to this beat because the snare is misplaced. But the rapping is very confident, and the guest verse by Aima sounds like Ladybug Mecca of the Digable Planets – one of the best ever, in my opinion. I want to hear Aima’s album sampler.

Well, a five song album sampler is all she wrote. From what I’ve heard, I would definitely not hesitate to burn the full album from a friend.