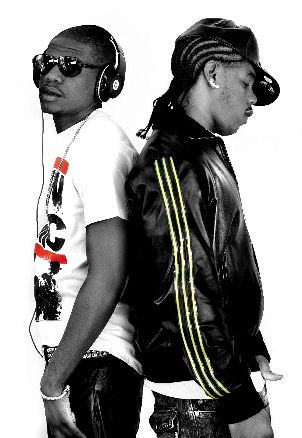 To a mainlander, the Virgin Islands may just look like sun, rum, and fun, but believe it or not, they’re also becoming a source for hip-hop. St. Thomas duo R. City is a leader of the VI scene and with their PTFAO (Put The Fucking Album Out) campaign they’re looking to force the hand of their label, Konlive/Geffen, to make an even bigger impact.

R. City consists of brothers Theron (aka Da Spokesperson) and Timothy (aka Don’t Talk Too Much) (pictured L to R). The duo are true veterans of the industry as they’ve penned lyrics for a bevy of top artists, including Rihanna and the Pussycat Dolls, and they’ve been performers themselves since the ages of eight and nine. After going through a handful of names, including Short Circuit, 2 Equipped, and Rock City, the latter also being the nickname of the island they’re from, the duo eventually settled on R. City (a Detroit rock band actually owned the name Rock City). Even with all the alterations to their name the brothers have never altered their goal – to show the world that the VI has skills and a unique style all their own. This week RapReviews caught up with the talkative half of R. City to find out more about the VI style, how he and his brother linked up with Akon, and why PTFAO isn’t just a campaign for themselves, it’s about the music industry as a whole.

Adam Bernard: Why don’t you start off by telling everyone a little bit about the Virgin Island’s hip-hop scene. Are all the individual islands totally unique when it comes to hip-hop, or is it more of a collective Virgin Islands scene?
Theron: It’s a Virgin Island’s scene. The kind of music me and my brother do, we were the first people to rap the way we talk, in our accent. People in our hood and everywhere in the islands was like yo, they’re rappin, but they sound just like me, who the hell is that? We didn’t start doing that until we met up with DJ Benny D. Benny gave us that style. We ran with it and perfected it and now where we’re from there are so many people doing music because now they really believe we can do this shit. We don’t have to change, we don’t have to be from New York or Atlanta. You can be from St. Croix and talk about your hood and say your shit and guess what, after a while people are gonna catch on because the ghetto is the ghetto is the ghetto. I don’t care if it’s the ghetto in Africa, the ghetto in France, the ghetto in the A, the ghetto in Wisconsin, wherever the hood is, hoods speak the same language. We’re hurtin, we need money, we’re broke, we’re fucked up – that’s a universal language and you don’t need nuttin else but to understand that.

AB: What drew you to hip-hop rather than reggae or calypso?
T: Our parents were big hip-hop heads. Eric B. and Rakim, and Rob Base, was the kind of music they played in the house. It sounds funny, but I wasn’t exposed to dancehall and calypso and stuff like that until I got to the third grade. Everybody would be talking about songs that I didn’t know, but me and my brother would come to school and be like ya’ll crazy, ya’ll don’t know that new Chubb Rock? That’s what we were talking about and they were like “what the fuck, are ya’ll retarded? You don’t know that new Beenie Man?”

AB: That’s hilarious! Moving from your childhood to your adult life, how did you end up linking up with Akon?
T: We knew Akon before he even got his deal. It was just like yo, dude is amazing, we love his music, and he was like, you guys, I love your music. Our DJ, DJ Benny D, he was part of 2 Equipped, and Akon needed a DJ. At that time we were in Atlanta, broke, and on the verge of giving up and moving back to St. Thomas. Akon was like “I need a DJ.” We were like, we got the most amazing DJ ever. We told Benny, if you get on, we can get on. Somebody gotta do something. Akon blew up to do what he did. We went back to St. Thomas, came back to Atlanta, was grindin, was workin. When Akon created Konvict Music Benny kept saying “sign the boys, sign the boys!” Then our buzz blew up so big in Atlanta that he just came and said “man, we gotta do this deal.” He knew us, we were able to be in control creatively of our music, so it made a lot of sense, at the time, when we did the deal.

AB: From that story it sounds like the first time you moved to Atlanta it was pretty rough.
T: Oh my gosh, we’ve been homeless, slept on trains, slept in studios, we did it all to be where we’re at right now, and we still having so much further to go.

AB: And you said you went back to St. Thomas for a little bit.
T: Yeah. I have a daughter, she’s six years old. She was born in 2003. I went back in 2004 as a dad. Family, to me, is the most important thing, so I felt like my daughter should have me for the first year. The first year of a kid’s life is when they really build that bond with a person, so I moved back home. My brother backed me and we got jobs and saved up and when my daughter was like one and a half we moved back to Atlanta to get it. My and my brother grew up very poor and my goal was by the time my daughter was five years old I didn’t want her to know what being broke means. I didn’t want her to know the feeling of being broke, of not having food, of sleeping on the floor, of mommy and daddy working 17 million jobs just to keep lights on. I didn’t want my daughter to know what that means, so that was my plan, that was my goal, and I’ve accomplished it thus far.

AB: That’s beautiful. And now your next goal, at least career-wise, involves your Put The Fucking Album Out campaign. Tell me what the deal is with this campaign and what it entails.
T: PTFAO. The music business is iTunes driven, it’s singles driven. People aren’t selling that many albums, so a lot of artists aren’t making complete bodies of work. They’re going in and recording seven billion songs looking for one. Me and my brother, we record seven billion songs looking for a great 13, a great 16, because I think that if you put together a body of work that people can pop in their car and ride to and get emotion from, you’ll last longer. PTFAO doesn’t just represent putting our fuckin album out, either. It started with our album, but PTFAO represents putting music out. People are like “put a single out, what’s the single,” and then complain that albums aren’t selling. Albums aren’t selling because ya’ll aren’t making albums, ya’ll are making good singles. Singles are selling because that’s ya’ll focus. Whatever you put your energy in is where you’re gonna get your greatest results. If I put all my energy in one song, guess what I’m gonna get, one fucking song. If I put my energy in a great 12 or 13 songs, nine times outta ten I’m gonna get a great 12-13 songs.

AB: So why aren’t they putting the fucking album out?
T: Me and my brother are going through the political bullshit of the music business where one person will tell us we should do international songs, another person will say we should sing more, somebody else will say we should a put a girl in the group, another person will say we should do some hood shit, and some people say “man, ya’ll need to do some more St. Thomas shit,” and these people are key players in our career. They’re saying “you should be Sean Paul, you should be the Black Eyed Peas,” and we’re just like goddamn, when am I gonna be myself? When does that ever come in? I haven’t heard nobody say that, yet. So me and my brother started the campaign on the BET college tour because fans kept asking “when are they gonna put your album out?”

AB: Have you received word on when Konlive/Geffen might PTFAO?
T: We haven’t received word at all, but we’re gonna put a song out ourselves and go on the road. We’ve set up a tour with the Virgin Islands tourism board, they’re gonna sponsor a Rock City tour. We’re gonna go on the road to colleges, clubs, bar mitzvah’s, weddings, wherever they’re willing to take us, and we’re just gonna do it like how the rock bands do it, jump in a fucking van and sing our song for two years until our fan base is so large, and people talk about us so much, that they don’t have no choice. We’re also gonna keep giving the fans free music until the label gets smart enough to put our album out, because at the end of the day you can’t stop because the label stops, and for me and my brother it’s not about the money, we make real good money writing songs. We’re very successful on one spectrum of the game. It’s just we started out as artists and that’s our plan and we’re not gonna stop until we get it.

AB: I’m glad you brought up your song writing, because I have one last question and it’s about that. You penned “When I Grow Up” for The Pussycat Dolls. Can you throw Nicole Scherzinger my number, man?
T: Oh, man, and it’s so funny because she’s beautiful, not only on the outside, but inside, too. I think every man would want to date her and if they ever get the opportunity they should. She’s really sweet, she’s down to earth, she’s really cool. I love working with her and the whole group. A lot of the people we work with are great. You know who we loved working with who was surprisingly different? Robin Thicke. He was really cool, like cat daddy with a slim top hat on cool. I also love working with anybody that’s gonna teach. Rodney Jerkins tells us stories about Janet, Madonna, and Michael, and their work ethic. To be around people like that, with their knowledge and longevity, that’s the blessing.