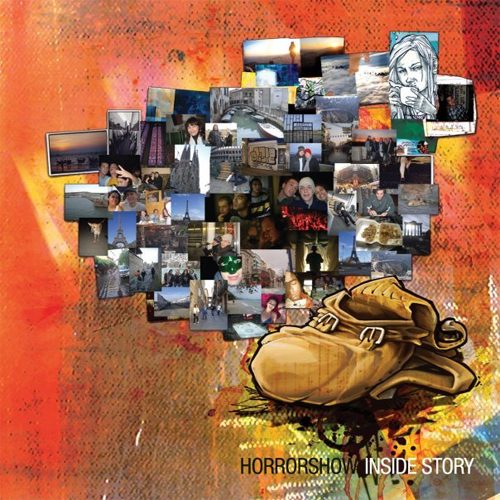 Continuing in our trend of offering exposure to the underexposed and often dope Australian hip-hop scene, please welcome Horrorshow to the main stage. They arrive a few days late for Halloween, but despite the name there’s nothing horrifying about the combo of Adit on beats and Solo on rhymes. Let’s start with the former. On only the second full length Horrorshow album to arrive in stores on either side of the Pacific, Adit shows himself to be a very adept producer, which could be (but probably isn’t) the pun where his name comes from. It could also be a play on “adapt” because that’s exactly what he does from one song to the next, matching sounds to the moods Solo raps. The opener “In” has a folksy guitar sound Everlast would be at home crooning the blues over. “Truth Be Told” bangs out somber pianos and drums as Solo advises listeners to live their own personal truth in or outside of rap. “In My Haze” flips the script and finds Solo singing a duet with Jane Tyrell, so Adit makes it work by combining a beat that’s half Yael Naim and half hip-hop. From the rough and rugged “Neighbourhood Hit” featuring Spit Syndicate to the personal and emotional banjo sound of “Walk You Home,” Adit’s on point.

Moving on to the latter, Solo lives up to his name perfectly as a rapper who shouldn’t share the spotlight with anyone. A few friends and comrades are invited in here and there on “Inside Story” to contribute, but this really is Solo’s story to tell. Some might think Solo included the lyrics to his songs in the liner notes so non-Aussie listeners can understand his rhymes, but his accent is no stronger (and often easier to understand) than some of the South’s most popular emcees. Rather the inclusion reflects the conviction of Solo’s flow, heard in every well-timed and articulated bar, that he has something important to say and you won’t want to miss it. It’s a quiet confidence born of paying dues, not a loudly braggadocious “fuck you I’m the best” and not the smugly intellectual “fuck you I’m the smartest” type vibe either. Solo stands alone with the mic in his hand and draws you in to his tales, whether of joy or of woe, and makes you want to learn where the story is going. It would be a “Thoughtcrime” to dismiss him as a featherweight lyrical pugilist though – he can throw some big blows:

“Hollllld up! Let me backtrack through the catalogue
And scribble thoughts of a good-for-nothing vagabond
MC’s are sheep – me, I’m a cattle dog
Herd ’em up and convert ’em like digital to analog
From Sydney to Babylon and back, we on track
Tryin to put that food for thought rap back on the map
Cause they hungry for some substance, I seen it in their faces
They questionin the bargain, wanna know what’s the basis”

The basis of Horrorshow is that substance, provided by Adit and Solo in large measure over a remarkable consistent 13 song album. Unfortunately like a lot of the Australian albums we cover on RapReviews, “Inside Story” may not be the easiest album to find at Best Buy or your local mom’n’pop rap shop, but if these words can’t convince you it’s worth the effort I suggest you go to ElefantTraks.com and sample a few songs yourself. I’m not sure I can call this duo the GangStarr of Australia off of just one album, but they’re certainly getting there, and Adit and Solo’s Horrorshow is far from horrifying.