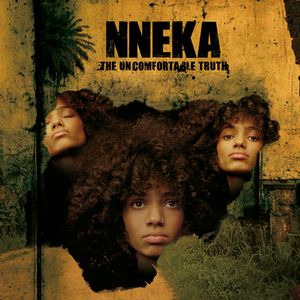 RapReviews is as straight to the point as website domain names go. We review rap. Rap reviews are found on the site. Labels and publicists still insist on pushing upon us other genres of music from time to time. For the most part, we are simply caught in the wide net casts by labels who will take publicity wherever they can find it. On occasion, we do receive an album that for one reason or another merits a bending of the rules. Nneka earns a pass for two reasons, she actually does rap on occasion and many of her musical backdrops are clearly grounded in hip-hop. Add to that the fact that her music is very good and she released a mixtape with the highly regarded DJ J. Period and it’s clear she’s earned enough stripes to get our attention.

Much attention has been given to who Nneka is. In an image driven American music market, this comes as no surprise. Nneka’s background definitely plays into her music and ultimately her appeal, but what really sets her apart is her talent. Simply put, the woman can sing. She can also lay down a decent verse and transitions between the two quite well. With her talent, it really wouldn’t matter what she was singing about, chances are it would sound good.

That said, her subject matter as well as the music behind it will ultimately appeal to most hip-hop heads. On “Africans” she addresses the same revolutionary themes found in many rap songs:

Lied to use, blinded us, slaved us, misplaced us
Strengthen us, hardened us, then they replaced us
Now we got the learn from pain
Now it is up to us to gain some recognition
If we stop blaming we could get a better condition”

Nneka continues the uplifting themes on “Beautiful” where she pleads for the world to see the beauty found in every person. “The Uncomfortable Truth” addresses a more conventional subject, love, and juxtaposes the deception often found in our love lives with the greater deception we find in world politics. The beat for this song is a dope, reggae-inspired, beat that could be at home on any rap album. The last song on this short EP, “Heartbeat,” follows a similar path as Nneka starts off by relating her own personal pain and heartbreak and ends up highlighting the greater pain found within society.

Nneka is sure to capture the ears of fans for years to come. Already three albums deep, all released in the UK, she is no newcomer. With her talent, style, and subject matter she is sure to transition to the US quite easily. This particular EP is pretty much moot as of the writing of this review. It is a four track collection of tracks from her previous albums. It is also a preview of her album “Concrete Jungle.” “Concrete Jungle” is a more extensive collection of tracks from her previous albums that released in February of 2010. I’d definitely recommend “Concrete Jungle” even without hearing it. At the very least you should check out the free J. Period mixtape to see if Nneka is an artist you’d dig.