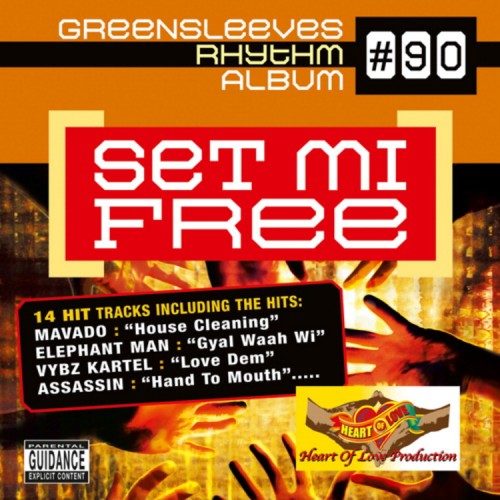 When I was a young child, JC Lodge’s “Telephone Love” was a popular song. It was so well recieved to the point that a compilation of songs was released, all riding the same riddim track. That collection, entitled “Telephone Tracks” included offerings from the likes of Josey Wales, Robert Lyn and Lady G, among others. Fast forward over two decades later and JC’s “Telephone Love” is still getting major play in the clubs. Some may even argue that it helped to make dancehall reggae music more of a worldwide phenomenon.

Judging by the “#90” affixed to this collection, it’s easy to see Greensleeves has been doing their thing for quite sometime (unless they graduated from the “DJ Clue School of Album Numbering”, which I know they haven’t). In fact, both Greensleeves and VP Records have been churning out reggae for many, many decades. Previous releases in the “Greensleeves Rhythm Album” series include: “Sweat”, “Inspector”, “Ghetto Whiskey” and “Petty Thief”, along with many others. This time around the riddim track is provided by Stephen “Di Genius” McGregor and producer Ricardo “Bibi” Gardener added his own touch to the individual songs. Over the course of the album’s fifteen tracks, the features artists ride de riddim for what it’s worth, with each performer putting their own twist on things. Some of the contributors include Elephant Man, Mavado, Jim Cro, Bramma and Mr. Vegas.

It’s interesting to see the various approaches taken by some of the artists. A handful of the tracks are laced with Auto-Tune adjustments in varying levels. Mavado’s “House Cleaning” uses it sparingly, but Suku’s “Walk & Live” seems to abuse it to the point of ad nauseum. Ding Dong’s “How Yuh Bad So” takes things to a raunchier level, while Mr. Vegas proclaims that he “Won’t Back Down” from any adversities that may come into his way. Two of my favorites on the compilation are Wayne Marshall’s “Dem Lost” and Patex’s “Tell Mi How”. On the former, Marshall speaks on those who purposely try to strip themselves of their culture and traditions in order to become someone else. On the latter, Patex questions the priorities of anyone who proclaims to be ballin’ outta control, but still has parents and siblings that “still sleep pon de floor.”

While not mind-blowing, “Set Mi Free” is a decent listen that probably works best as party music or background filler for some other sort of social function. The rhythm is easily accessible, but not necessarily that memorable. It lacks the boombastic sound that made JC’s “Telephone Love” resonate so deeply within me, but I still look forward to seeing what Greensleeves has in store for #91.