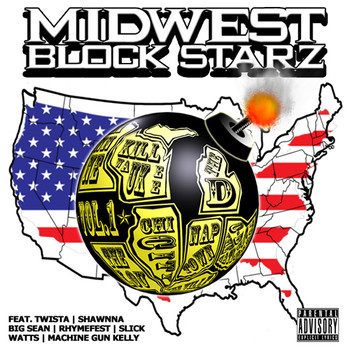 As a section on the hip-hop map, the Midwest may be the least prolific out of the four big US rap regions, but it has still produced a sizeable amount of stars, among them Bone Thugs-N-Harmony, Twista, MC Breed, Eminem, Common, Kanye West, Nelly, J Dilla, Atmosphere, Tech N9ne, and Lupe Fiasco. As the name implies, the Midwest Block Starz may be big fish in their small ponds, but on a larger scale they’re still local hopefuls. As on previous “Block Starz” installments, some get assistance from established artists, but the idea is that the featured acts can make an impression all by themselves.

We kick it off with Bigg Jigg and “Streetz on Lock.” The Chicago representative and self-proclaimed ‘Talk of the Midwest’ introduced himself to a national audience back in 2005 when he was 106 & Park’s Freestyle Friday champ for four consecutive weeks but claims to have had “a crazy fanbase ‘fore I hit TV.” His offering speaks of his experience, it’s just that we’ve heard it all before, from the “Y’all already know what it is” intro to the “If I don’t get it rappin’, then it’s back to the block” argument. The gravelly-voiced rapper may offer, “I ain’t talkin’ DJ Khaled when I say ‘I’m so hood’,” but the truth is that he would perfectly blend in on any Khaled-led invasion.

One detail about these Midwest Block Starz that catches your eye when looking at the tracklist are derivative names: Fonz, Machine Gun Kelly, Slick Watts. The latter, crowned Best Midwest Artist at the 2009 Underground Music Awards and named after a ’70s NBA player, sounds like a cross between Tech N9ne and Lil Wayne, which isn’t necessarily a bad thing, but without either rapper’s intensity, he may just lack the characteristics that make Nina and Weezy the stars they are. Plus “Yada Yada Yada” creates a familiar conundrum when the rapper dismisses other rappers’ chatter with his own. At least Slick Watts projects something to live up to: “I’m big ish talkin’, I got big ish poppin’ / Ohio don’t make ’em like this real often.”

Another artist name that could be athlete-inspired is Mike Schpitz. The Kansas resident rocks the comical “Year of the Nice Guy” with a Souls-of-Mischievous delivery, and while the performance isn’t yet spot-on, it’s promising:

“It don’t make no sense, but one day it might
I paid my price, stayin’ tight through Day ‘n’ Nites
This Kid Cudi been in his mint snuggie
been on the bench spendin’ his money on gin rummy
I been hungry, just rubbin’ my big tummy
like this my world, squirrels is lookin’ a bit nutty
You sick, buddy; not in it for big money
I’m in it cause I spent the last of my rent money
I can see it in their face, they know it’s gettin’ ugly
cause now I’m on, my memory’s gettin’ a little fuzzy”

Fonz is the compilation’s hardest to research rapper, which either means he has yet to establish an internet presence, chose a too popular nickname, or Google assumes I’m an illiterate looking for fonts. His “New Way to Eat” doesn’t offer anything new as far as content goes, but the combination of lackadaisical sing-song and very moderate synth track is a success. Machine Gun Kelly – the rapper, not the prohibition era gangster – made it much further, his “Alice in Wonderland” video so far tallying 25’000 views on YouTube. The song evokes favorable comparisons to the Dungeon Fam and Bone as the Cleveland-based MC takes you on a surreal trip through his consciousness with a double-time flow over astral keys anchored by mechanical drums.

Young General is at it not “Day ‘n’ Nite” but “Night and Day,” a badly executed personal anthem that takes one too many clues from emo rock with tinny guitars and a maudlin self-sung chorus. Plus, while previously representing Minneapolis, he now seems to stress a Chicago homebase: “I’m so real like, ‘He never spit a fake line’ / Ain’t nobody from the Chi got this much face time / nah, not since John Starks went baseline.” Unfortunately, Starks happened to play for the New York Knicks in the game Young General refers to, not the Chicago Bulls. If you switch teams, you should at least get a bit familiar with your new franchise.

Although not exactly a burner, “Loungin'”‘s Chi-Town flavor is definitely stronger as Skooda Chose is assisted by the unlikely combo of Mikey Rocks (of Cool Kids) and the legendary Twista, who coincidentally tips his hat to the great late Guru:

Recalling the laid-back manners of All Natural or Lupe Fiasco, YP’s “I Hustle” represents the Windy as well but still manages to send a shout-out to Detroit: “You ain’t heard, I’m that nigga they hate now / against the Free World like Marshall in 8 Mile.” Chicago native and Wisconsin resident Smokes motivates himself convincingly over a polished, smooth soul track on “Closer” while Rhymefest is a continual disappointment with the neo-soulish, bland “Say Wassup” that can’t be elevated by a crooning Phonte. I hate to say it, but the more mainstream – and admittedly simplistic – songs that acknowledge the presence of the opposite sex just fare better. Tugun Cannon’s “Dance Floor” is a surprisingly sophisiticated take on minimalist club hop while Shawnna contributes a sweet, suggestive sixteen. (Your loss, Ludacris). St. Louis’ Will Victory offers his Kevin Costner services on the infectious “Bodyguard,” justifiably slated as the album’s second single after “Dance Floor.” Maybe slightly less eager and enthusiastic, Columbus’ Fly.Union still attract gorgeous females, at least judging by their video for “Poe’d Up.” Unlike in the Fresh Prince days, girls today seem to like hearing that they’re nothing but trouble…

Featuring star in the making Big Sean, “Poe’d Up” embodies the most current wave in hip-hop, which cannot be said for “Know Dat” by Diego Heat (f. Smoke Nitti) out of Joliet, IL, who rehash the past decade’s brand of gangsta rap. Cola Zone may deliver a similar message in the closing “Optimus Grind,” but as the title suggests, they’re poetically more inclined and seek support in an industrious underground beat, perhaps the sampler’s most daring production.

The last thing you hear on “Midwest Block Starz” is L.L. Cool J and posse rejoicing in the fact they made another album. The “Bigger and Deffer” skit has previously been sampled by N.W.A for “Efil4Zaggin.” The makers of the “Block Starz” series may feel similarly, but clearly no history is written with “Midwest Block Starz.” Still the majority of these cats representing today’s hip-hop spectrum between hipsters and hustlers deserve the minimal exposure they get here.