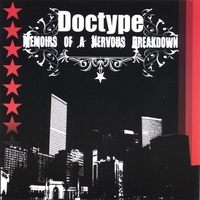 Doctype :: Memoirs of a Nervous Breakdown

It doesn’t take much attention to detail to realize that Doctype’s instrumental album, “Memoirs of a Nervous Breakdown” is going to be a strange affair. Looking beyond the name, that hints at a sporadic type of album, one will see the Dirty Laboratory Productions icon, which is a three-eyed fetus sporting some ear-covering headphones. So, can the beats on this album really make even the youngest of toddlers rock out!?

First off, this album truly lives up to its name by covering a vast landscape of musical sounds (instruments), types and overall feelings. The difference between the first and second track is immense and this pattern, or lack thereof, carries throughout until the end of the 12 track disc to truly embody that feeling of a man in the midst of a nervous breakdown.

“Coach”, the first track on the album, isn’t amongst the best and starts the album off with a sour note. Although, it does almost give some kind of indication like it is building into something bigger and more intense. The snappy snares are catchy enough, but the background sound is almost romantically soft. It is the type of song that you would hear chillin’ out on the patio of a south Miami Beach restaurant.

As indicated, the next song starts off kind of awkwardly as it presents such a different emotion. It is entitled “Fear” and is one of Doctype’s personal favorites as he notes in his liner notes. “Fear” is one of the finest selections on the album with its similar drum pattern to “Coach”, but with slamming cymbals and a tense piano that sounds akin to the theme from the “Halloween” movie.

Again, the mood is brought into a whole new direction with “Elmo”. “Elmo” is an interesting name for the song, because it is a lighter joint in general. It still is not completely fitting when you consider the bluesy inspiration.

The middle of the album reaches a point of lull. The tracks that feature rappers are forgettable, if not painful. Extra Kool, who is featured on the track “Birthday Suits” also sounds like he is on the verge of a breakdown with his whiny and erratic vocals. “Memoirs” featuring Time seems to hit a more enjoyable stride. The beat on “Memoirs” is very dramatic and his lyrics match that sentiment with lines like “Kill the body and the head will die/ I gotta get away, I wish this car could fly/ I wrote this because she was more than a makeout/ this isn’t a song, this is a breakdown”. The beat takes over the foreground and takes away from a good performance. Doctype claims that his ideas behind each song were cemented in his mind before he put emcee’s on them and they changed those thoughts. Giving an emcee artistic freedom is important, but if it is a producer’s release the emcee’s should take the word of the beat smith and roll with it instead of making it their own thing. There are not enough lyrics to rate as this is an instrumental album at its core.

“Sexy” is another track that needs to be mentioned because of the heavy Spanish influence. The instrument that takes over this is that trumpet you hear in a Mariachi band–When you stop and think about the implications of the name and the influence, as a listener, you can connect with what Doctype is trying to present to you. That Spanish matador type of atmosphere is often construed as ‘sexy’, so the title makes plenty of sense.

The weird thing about Doctype’s beats is that they cannot be compared to any other notable material. The closest resemblance would probably be some of MF Doom’s minimalist stuff. It is hard to imagine many rappers wanting to flow over these beats, especially considering that many of them do not have much hip-hop influence at all. Some of the beats come off too soft, like something you may hear in a soap opera, if it were not for the upbeat tempo. “Memoirs of a Nervous Breakdown” is as weird of a listening experience as one would expect after feasting their eyes on a three-eyed fetus with headphones. The album is sporadic, sometimes to the point that the transitions between songs feel wrong, but this may be Doctype’s vision realized. However, the overall effect of the album is one that is not only sporadic in sound, but also in quality.