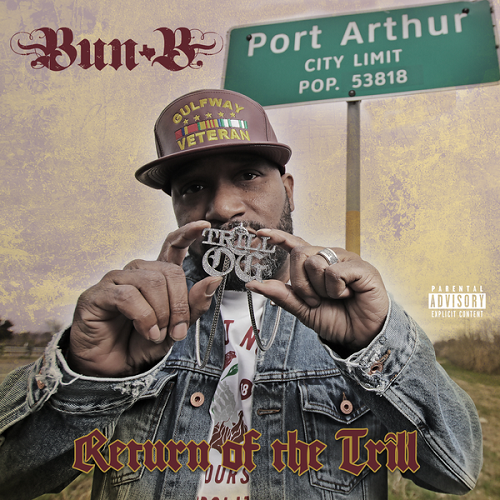 Bun B :: Return of the Trill

If you’re conscious of your own thinking, you sometimes notice your reasoning taking certain turns it didn’t take before. A number of years ago the terms typically and traditionally suddenly found their way into my conversations about rap music. What these words imply is that there exist sets of norms and codes that began to take hold over time. With rap coming into existence so spontaneously and changing so rapidly during its formative phase, at first there was no use for these words. But eventually certain aspects of hip-hop became institutionalized, so to speak. This has only tangentially to do with usual practice, a common denominator, some unwritten law, time-honored tradition or ancient ways. It’s about rap that is recognizable. Rap that, across many different dialects, talks a common language. Rap that doesn’t always have to start from scratch but rather contributes to an ongoing conversation.

A classically trained MC, Port Arthur’s Bun B gives you traditional rap two-fold – he can draw from the Texas rap sociolect and he can delve even deeper, into the technical authority he forged throughout his career. He combines both on the Port Arthur rap tribute (and opener) “Trill Over Everything” (“Pimp City, Bun Town / Lived for it and died too”) or alongside two Houston veterans who are kings in their own right, Slim Thug and Lil Keke, who team up with Bun over Big E’s glacial “KnoWhatImSayin” to represent their turf as rappers do – by declamation.

Music and words both observe tradition in similar fashion on “Return of the Trill”. Beatking breaks out old school swagger for the unorthodox women’s empowerment manifesto “Hoes From Da Hood” while “U a Bitch” shows the wide range of applications of calling someone a female dog: Pimp C assists his partner posthumously with interview excerpts as Bun takes aim at the prison-industrial complex and big pharma. As rap has always done (and the south especially successfully), Bun breaks the problem down to ground: “They don’t care about a cure, they just wanna sell a treatment / Keep you alive while keepin’ you high, now that’s some street s–t”.

Bun’s fifth solo effort also gains from the guiding hands of Big K.R.I.T., who produces almost half of it. In the tradition of top-shelf southern records, K.R.I.T. and the other producers never simply array instruments, they make them sound a certain way. The album is also successful when it deviates from that formula, see Mannie Fresh’s glorious gospel trap for “Trap Hands” (with a showstealing verse from 2 Chainz). Still K.R.I.T.’s contributions stand out for the reverent approach he takes to crafting soulful rap tracks that brim and bubble with savory ingredients. “Outta Season” harks back to the UGK catalog. “Recognize” strikes just the right balance between subdued and celebratory for the lyrical workout.

But K.R.I.T. truly rises to the challenge on two of the album’s most impressive songs. A classic loop arrangement of drums and organs that could also come from the Wu-Tang Clan or the Diggin’ In The Crates crew drives “Blood on the Dash”, a tale that makes use of the Rashomon effect. First we hear from the suspect getting pulled over by the police car, then from the officer. The track demonstrates what Bun is capable of and in the end also represents a shift of perspective for the rapper himself, when, for instance, compared to the payback fantasies of UGK’s “Protect and Serve”. The same team is responsible for the emotional finale “Gone Away”, featured guitarist Gary Clark, Jr. joined by singer Leon Bridges to assist Bun B in his eulogy for Pimp C, a sincere and loving farewell fans surely can relate to.

A relevatory experience, “Return of the Trill” has more in store. There’s the Run the Jewels collaboration “Myself”, a focused piece about taking care of yourself. There’s an equally serious-minded song with Memphis legends Eightball & MJG called “Grow Up”. There’s the unabashedly Jamaican “Rude Boi” with none other than Lil Wayne. And there’s South East London’s Giggs on “Never Going Back”, notably Bun’s second British feature after Dizzee Rascal’s scene in “Underground Kingz”. Usually reserving the last verse for the guest, Bun has always enough time to drive his point home:

“Man, I was broker than a joke that nobody could laugh at
Think of the po’est kid you know in life, I had half that
Watch my momma break her back for a roof on my head
So right then and there I said I’m goin’ after this bread
They say rap or grab a ball, so I picked up a pen
Put my life up on that loose leaf and spit out my sins
Put it down with young Pimp, my best muthaf–kin friend
Told the truth and didn’t have to pretend, we got it in”

There’s always a risk in telling new arrivals that this is the way we do things around here. Expect them to rebel against it and make up their own rules. Steeled by years spent in opposition, Bun B braces himself for this reaction with the – wait for it – typical ‘Hate it or love it’ attitude. Only that hating “Return of the Trill” may not be that easy.

Bun B :: Return of the Trill
8Overall Score
Music8
Lyrics8