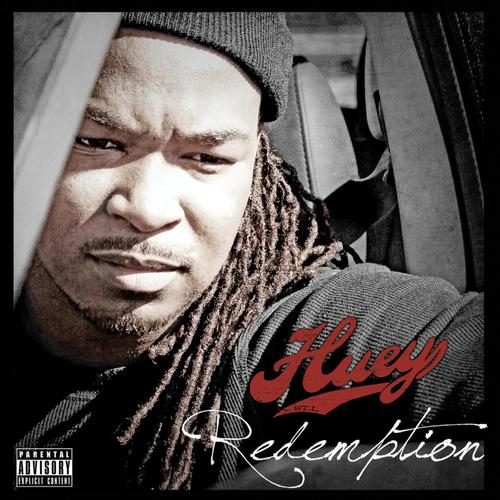 What does Lawrence Franks Jr. need to be redeemed from? Perhaps it’s from being released by Jive/Zomba after his first album “Notebook Paper,” although in his own words “You might be telling the truth/but really I released myself.” Maybe it’s from being perceived as too junior to be taken seriously, given his first album referenced schoolwork and the cover saw him sitting at a desk with a blackboard in the background. Education certainly isn’t his focus on “Retarded” though, as Huey takes obscene amounts of pride in being materialistically shallow, bragging “I look blind but this money make me see things … I’m handicapped but this money make me walk straight … I get my retarded on when it’s about cash, I get my retarded on with my retarded ass.” Maybe he needs to be redeemed from feuding with Nelly, because it doesn’t seem like St. Louis was big enough for both of them. There’s little doubt that if the careers of the two were measured side by side, Nelly’s about 20 million albums ahead.

Whatever Huey’s reasons for being redeemed are, there’s no question he’s trying to be taken more seriously on “Redemption.” His deep voice has gone if anything deeper and there are Dorrough to take things to the next level on his new album’s first single “Smile & Wave.”

Dorrough: “I got my Louis V shades on, feelin good
Hangin out the sunroof, I guess I’m gettin my parade on
I smile and wave like the President
The heated nina I stay present with, squeeze it with no hesitance
Out here on the grind, I don’t know nobody else
that ain’t just out here trying to shine, I don’t need nobody else
to tell me what to do I’m fine, I ain’t never been a failure
You want to hurr it from my own mouth? I’ll tell ya”

Huey: “Homegurl, how you like my teeth?
I ain’t got to have a grill for me to floss all week
That’s the reason that I smile, and wave, I’m proud, to say
The bling in my mouth comes from usin Colgate
Ridin in this old 8, full speed, no brakes
Just set it on these wheels and I feel no shake
They said I wouldn’t make it out and even though I made it out
I still have to question what these other suckers hate about”

Could the “grill” reference be one last veiled shot at Nelly? Perhaps, but it’s still a refreshing change of pace to know a rapper might want his teeth to shine without gold and diamonds. On most of the album though, Huey is coming out as hard and as G as he possibly can, creating a virtual front without having to shop at Paul Wall’s store. The extra heavy bassline of “Section” reflects Huey’s extra mannish delivery, spitting the word “nigga” as often as possible and making sure that he’s “doing big numbers, and since numbers don’t lie, we ridin in big Hummers.” In Huey’s section they “pop bottles, nigga we don’t drink beer.” It was never easy for the average listener to relate to excessively conspicuous consumption in hip-hop, but in 2010 it’s increasingly out of place, given even those with champagne tastes have had to get used to a beer budget. Still the #1 axiom of flossy rap music is that if you don’t act like you have it, you won’t ever get it. As such Huey’s more than content to make it “Rain” with “a white bitch,” then “Go Crazy” on a pop crossover track featuring Colby O’Donis, then jump right back into bragging how “Famous” he is.

Last time around I wrote about how Huey’s song titles were more than a little bit predictable, with the burgeoning rap star working hard to be just as shallow and superficial as the subject matter the track names references. A lot of things may have changed for Huey in the last three years – his record label, his image, his tone and his delivery, but what has largely stayed the same in that time is how superficial his topics are. Age has not offered Huey any more wisdom or insight, and despite an up to date sound in terms of production he actually seems behind the times flossing to such an exaggerated degree in a recession. If you have it and can bling it there’s no reason that you shouldn’t, but there’s an old adage that those who have strength don’t need to show it off to prove it. Wealth is the same way – you don’t see Bill Gates or Warren Buffett driving Bentleys on rims. What Huey might really need to be redeemed from on “Redemption” is trying so hard to prove something – if he’d just relax and floss a LITTLE bit it wouldn’t ALMOST seem like he was faking it. His album includes a message to non-believers called “Hello 2 All My Haters,” but it’s really not hate at all – just some words of advice to help him with his third album after his forthcoming second label change.