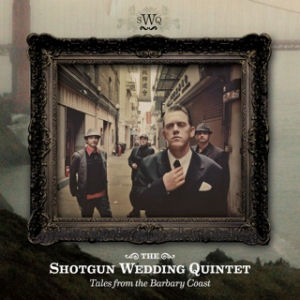 The Shotgun Wedding Quintet :: Tales From the Barbary Coast

The Barbary Coast sounds like an alluring yet far distant land, accessible only by boat, where pristine white sand softly envelopes your toes as you walk barefoot on the beachfront. A sharply dressed employee of the only resort allowed to operate on the coast brings you a tall, amber colored alcoholic beverage – strong enough to feel yet sweet enough to mask the throaty burn, without any cough syrup overtones. In the distance a vision of nubian beauty whose hips could have launched a thousand more ships than Helen of Troy ever did waves to you, beckoning you to join her. Ahh yes, let us hear these tales of the Barbary Coast, this mysterious and seductive home to enchanting adventure.

“We on a mission, to scope out the pond and go fishin
Laid back, go over to the bar and get your vision
of a fine starlet named Scarlet
She let her body swell, I wanna drop my bucket in her well
and drink deep – tryin to roll up and spit game
Want a beverage? Whatever you want, and what’s your name?
No reply… that’s alright
I’ll take my time near the tables and watch the mermaids go swimming
in the sea – I’m aware of the mythological creatures
that seduce men with their features
But I swear that I’ve seen her, swimming off the coast…”

The name, much like the above lyrics from “Numbers Game,” is deceptive. Though it sounds mysterious and romantic, the Barbary Coast is actually a historically infamous red light district from San Francisco, California that boomed during the gold rush of the 1840’s and 50’s. Writers of the day who had much to say about it had nothing GOOD to say about it – some even implying that if the mouth of Hell could open to swallow humanity whole it would be found there. Men outnumbered women a 100 to 1 and it was said the 1 was usually a prostitute. Sex, drugs, gambling, and any other vice to keep a gold miner entertained while the scant few bits of precious metal he earned were taken from him (in payment or by force) were to be found there. Its days as a den of inequity were numbered though, as it first got destroyed by fire and earthquake in the early 20th century, then systematically dismantled by Franciscans tired of its seedy reputation. Laws were passed. Prostitutes were rounded up and evicted. Seekers of vice went elsewhere to fulfill their seedy needs and the entire thing was swallowed not by Hell but by immigrants and businesses that needed land.

So who are The Shotgun Wedding Quintet and why are they rapping their “Tales From the Barbary Coast” to anyone who will listen? For a start they’re an offshoot of the Jazz Mafia, a collective of Franciscan musicians from the Mission District. The Mafia’s erstwhile leader is Adam Theis, who is a member of SWQ and several other groups that spin off from the Mafia collective. He plays so many instruments you may be hard pressed to pick him out in a song – everything from bass to trombone to tuba. pDubL is a little easier to identify – he plays the drums and rocks a sampler. Joe Cohen is almost as versatile as their leader but tends to prefer keyboard instruments, occasionally blowing on a saxophone. By far the most identifiable, especially for a hip-hop audience, is their frontman/emcee named Dublin. On the album’s opener “Vertigo” you may mistake him for a narrator – he sounds like the kind of man who would set the scene for a film noir thriller about a hard-boiled detective trying to solve a grisly murder with a beautiful dame on his arm.

“There was a girl at the downtown train station
The way she wore her hair up in a tight dark bun
reminded me of the one, that could get away
So I followed her
She walked through post-holiday shopping crowd
And navigated by the trolley turnabout
She never looked up from the path right in front of her
She never stopped for a quick gaze, snooping in shop windows
She walked for thirty-two minutes, down fourteen blocks
By the noontime watering holes and the mid-day lunch spots
Nothing stopped her step
Not even the red hands of the crossing lights or the traffic
I stopped but couldn’t ignore this when she took a right in her travel
Inside the Mission Delores and she ran into the chapel
So I followed when I heard a scream out front
Like a blurry dream found down on the ground
Jumped to her death from that rooftop!”

Throughout the above verse, Dublin’s bandmates are ratcheting up the tension in a jazzy, melodic yet ominous way – so that when she leaps to her death the music reaches a dramatic crescendo – and yet that’s not the end of the story but only the first third of the song. So it is perhaps fair to say that the songs of “Tales From the Barbary Coast” ARE being narrated like a movie, a film about the ills of a society full of desperate people, living in a place where a history of sin and vice were swept under the rug but only the name really changed. Some songs are more traditional raps like the aforementioned “Numbers Game,” which finds Dublin trying to get a sweet lady of his own, with the title a double entendre and the chorus a specific one talking about his odds if he keeps on trying over and over again to GET that number.

The songs of The Shotgun Wedding Quintet are not radio formatted quickly digestible pablum for the masses. Only three out of twelve songs clock in under 4 minutes, while an equal number clock in at OVER 6 minutes in length. It also takes a bit of a beatnik state of mind to dig these cats – as though you’re standing at the epicenter of a galactic collision between Digable Planets and poetry stars like Saul Williams. If you’re comfortable with that gravitational pull, it will swing you into a cool rebirth with up-tempo swinging music like “Too Hip to Live” with slyly ironic mack game like “might find that strange or kind of weird/but I’m not as whack as I appear.” You might think this jazz band is operating on an ironic wavelength for songs like “Too Be or Not B-Boy” but despite sounding more like Keanu Reeves than Ice Cube, Dublin’s definitely serious about his lyrics and his band is serious about their jazz. The Shotgun Wedding Quintet has a funny name and a different sound than you’re probably used to, but “Tales From the Barbary Coast” works. I’m only left wondering how a quintet can have only four members.