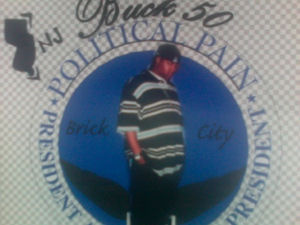 Buck 50’s life has always been about struggle and pain. Even his name explains his identity as he received a large cut on his face from a box razor in a fight which typically needs 150 stitches and so he coined the name “Buck 50.” Followed by the death of his parents, Buck 50 has only been inspired from his experiences and has put forth all his passion into his music thus completing his latest album, “Political Pain.”

In this six track album, Buck 50 attempts to provide insight on the “ghetto life” and the struggles he has overcome through the years. “Political Pain” begins with “Lock it Up” as he explains life on the streets while joy riding through New Jersey in a stolen car. While on his escapade in the track, Buck 50 pays homage to Jersey by highlighting its different areas and in turn, shows the attempt to survive the chaotic streets.

The album is continued with “Street Dreamz,” an introspective look into Buck 50’s life in the face of adversity. In this standout track, strings and hard bass complement his rhymes as he shows:

“Trying Real Hard” features female vocals and describes the pressures of life both personal and political. Buck 50 goes into detail about the difficulties he faces with his family, his music, and making money while living in an area of Jersey under constant struggle. He explains his efforts to survive as he says:

“Buck 50, my name ain’t that hard to explain
War scars from a razor blade cutting the game
Addicted to chaos because the terror never stops…
If you understand the pressure
Then you know how I feel
Holding the weight of the world on my chest
Now that’s stress, I’m blessed
Everyday that I take a breath”

In “Take My Breath Away,” that samples the classic 80s Berlin song, Buck 50 takes a moment to remember those close to him who have passed. Although an interesting song selection to sample for a rap album, Buck 50 truly lets his guard down while inviting his audience to experience his pain and anguish. Also, in “All I Do,” Buck 50 includes a more emotional track about his love for a woman that seems awkward amongst tracks about the streets, but provides another side of Buck 50 that may have been overlooked.

It’s apparent that Buck 50 lives what he tells. A storyteller through his music, Buck 50 shares his battles and emotions, yet retaining the level of gangster rap. His lyrics are solid and are poignant, defining who he is as an artist. Although the production was a little unrefined, with some fine tuning the potential is great. It’s apparent that Buck 50 has truly been inspired by his struggles, but through his music, it has only made him stronger.