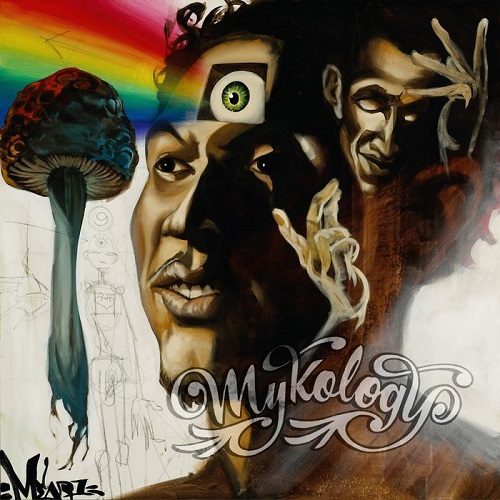 20 years of left coast lyricism is the legacy Myka 9 already has under his belt, dating back to his days rapping at the Good Life Cafe and being part of seminal rap group Freestyle Fellowship. Regardless of whether he goes down as an all time top seller in terms of units moved, it doesn’t matter, because he’ll go down as one of the most influential artists in hip-hop. There’s no way to listen to his raps between then and now without acknowledging his creativity, his word-bending ability, and his willingness to flow in many unconventional ways that are ear catching. He’s a pure uncut talent.

If you’re a Myka 9 aficionado that praiseworthy opening apologizes for what’s about to come right here – I haven’t dug Myka 9’s solo albums all that much. Last year’s “1969” is the only one I’ve felt to any degree. As talented as Myka is, there are times where I feel like he’s committing emcee masturbation on the mic. You can spend all day showing off how clever and creative are and how advanced your mic techniques are, but at some point you also have to remember to make a song people want to listen to. Replay value does count for something, and no matter how impressed I might be with the technical acumen that Myka has, I don’t feel inclined to listen more than once.

To his credit “1969” showed that at least on some level 9 was aware of this conundrum, and “Mykology” is another step in that direction. The first positive aspect is the length – eleven tracks in total and a running time of under 45 minutes. That’s a digestible length of Myka 9’s unconventional flow, which switches back and forth between singing and mic spitting any time he feels like it. The second is he’s toned down what for lack of a different term at this moment I’ll call “the weirdness factor.” He doesn’t have to prove on every song that he’s the most creative artist who ever lived – it’s okay to just tell a story and do so with an engaging dialogue. “I Must Cross” succeeds in both counts – a story of illegal immigration and hustling by any means to survive and feed a family:

“Respect to all the Mexicans, Guatemalans, El Salvadorians
Costa Ricans, Nicaraguans, Ecuadorians
Cubans, Chinese, Koreans, Vietnamese
Croatians, Israelis, and Lebanese
Haitians, Panamanians, Irish and Africans
I know where they comin from, I know ’bout the path they been
Bah bah black sheep, have you any work?
The extortion on the corner’s got my pockets feelin hurt
“I don’t care if they stay since they been here anyway/but
they should share any they should pay like everybody else today”
After walkin long distances, or hidin in trunks
Climbin over fences or cuttin holes in gates
Makin makeshift boats, comin in shipping containers
and fake marriages, diggin tunnes dangerous
These are dishwashers, or gardeners, or fruit and vegetable pickers
These people are our car washers”

This is the kind of Myka 9 I’ve been looking for all this time – using his intelligence and empathy in a focused way. It’s even clever how he flips it up in mid-verse, adopting the voice of the people who write immigration laws in Arizona for a couple lines, then flipping back to the perspective of people doing laboriously hard jobs for minimum wage or less (often much less). It’s a social and political statement without smacking you over the head by parking a tent on your lawn. (Not that the #occupy people are wrong – it’s just a different style of voicing the message of the 99%.)

The weirdness is also kept to a minimum musically, as there are a lot of songs that are genuinely fun and head-nodding. The posse-all-in cut “Oh Yeah…Alright” features everybody from Aceyalone to Casual to Sunspot Jonz dropping bars to the super funky bassline and beat. “Tell Me” is the kind of song where Myka 9’s singing style makes sense, as it fits with the laid back jazzy and horny horn backdrop. And if you want to see Myka 9 show off his super verbalistic pugilistic skill and ability, then songs like “Mind Right” deliver in that category as well. To put a a fine point on this, “Mykology” has a little something for everybody. For the first time at the end of the closer “Don’t You Go,” I really do want more. I hope this is the continuing evolution of 9.