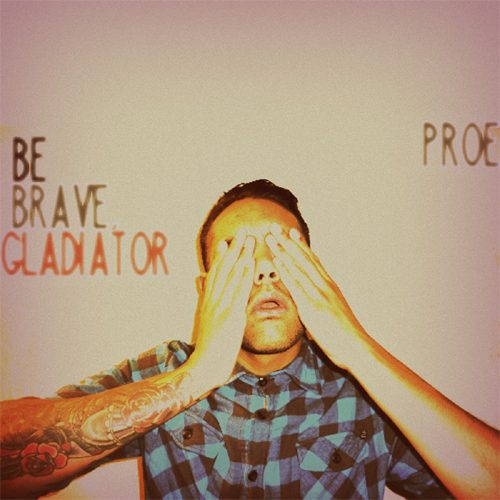 This is probably your first introduction to Proe, so allow me the privilege of giving you a brief bio on the artist. He was born and raised in Santa Cruz, California. I was only there for one day many years ago, but I can tell you that the weather is mild and the Pacific Ocean was (at least when I went in it) hella cold. Proe considers himself a Californian for the entire Golden State and not just his hometown though. As his own bio says, “Proe’s sound has little resemblance to his surroundings,” meaning that if there is such a thing as a typical Santa Cruz rap sound he’s definitely NOT it. In fact he happily uses words like “oddball” and “unconventional” to describe his style, which depending on your point of view either makes him less or MORE like his fellow Cali rappers.

“Be Brave, Gladiator” is a title that may cause misunderstandings. Rap by necessity requires you to be egotistical enough to think people should hear what you have to say. The timid and fearful won’t last long on the microphone, and possibly shouldn’t pick one up at all. On the other hand the historical origin of the word gladiator would indeed fit the sentence the title forms. Russell Crowe has glorified the term through cinema, and mixed martial arts loves to co-opt it to imply bravery, but the “gladiators” who were figuratively and literally thrown to the lions were often petty criminals and slaves. They were untrained and ill-prepared for the life and death struggle they were about to endure in front of tens of thousands of screaming Romans, so a little encouragement to be brave in the face of death was really the best they could hope for.

Is Proe engaged in that kind of life and death struggle on this album? By his account this is his first release “after a long hiatus from all things music,” so perhaps he feels like this is indeed a time to be brave. The album however suggests he is. Proe has as much swagger as is necessary to be an emcee, and on “Cuss By Candlelight” he proclaims himself everything a fly girl is looking for:

“You are a pretty little therapy
Firecracker in a shotglass of kerosene
Together we are a better melody
She said, ‘You’re preaching to the choir baby – let us sing’
Now I don’t mean to be so vulgar
But see I mean it’s never mean to be below ya
Behind ya, catchin up and passin out beside ya
Wakin up speakin in tongues
Never been possessed quite like ya”

Proe applies a little bit of distortion to his voice and to the singing on the song’s hook, and yet his words still come across crystal clear. It’s guitar rock meets hip-hop in the best possible way. Relationships seem to be a recurring topic for Proe. He’s checking out “all the pretty girls with the tattoos at the hair salon” on “She’s a Cutter.” “Come Sunday” he’s onto a whole new vibe, one where he’s “never felt so good since the last time I got out of jail,” and considering he’s going to Hollywood I don’t think church is involved. There is an edge of menace on the album from time to time though, because if you learn one thing about “Box Cutter Johnny” it’s that “the boy don’t play.” Most of the time though when Proe lights the “City On Fire” it’s not because he’s a pyromaniac, unless by that you mean his music is too damn hot. Most of his vibes are bouncy and positive.

By the end of 45 minutes of “Be Brave, Gladiator” it doesn’t seem that Proe is lacking in confidence in any way – yet we come back to the fact he was on a self-imposed hiatus from music before releasing this album. Perhaps he was afraid that audiences didn’t get his vibe. At times he can lapse into singing, and at times he’ll challenge you with his flow and vernacular, daring you to keep up with the song. He’s definitely not dumbing down the music, and that may indeed be what he’s really afraid of – commercial failure. These days it’s not easy to sell rap to the masses without playing to the absolute lowest common denominators, and that is something Proe not only refuses to do but which I believe he’s incapable of doing altogether. Fear not though Proe, even if you can’t go gold with it, you shouldn’t be afraid of making music you can be proud of. He won’t regret this CD.