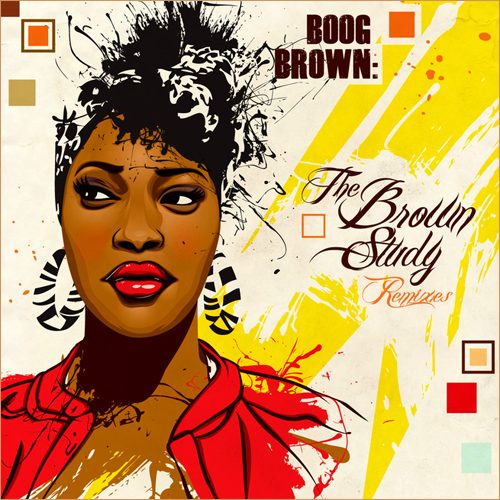 Apollo Brown is a frequently dropped name here and elsewhere, but his 2010 collaboration with female rapper Boog Brown, “Brown Study,” came and went largely unnoticed. A little more than a year later it’s time for “The Brown Study Remixes,” our chance to get (re-)acquainted with Boog Brown and “Brown Study” from a slightly different angle. The Michigan producer is still on board, for the new track and hometown anthem “Detroit.” Boog Brown may have begun to take roots in Atlanta but she still has love for the D, as evidenced by her ode to “the pretty and the gritty, Detroit Rock City.”

The other new offering is “Growth,” an optimistic manual for personal progress (best summed up by the line “Don’t harbor ill will when it’s time to build”) set to a gingerly flourishing track courtesy of 14KT (of Athletic Mic League fame). The remixers generally turn in competent performances. Nick Tha 1Da opens the proceedings with etheral voices and soulful strings (“Shine”). MarvWon adheres to the Detroit school of production with his slightly abstract, avantgarde beat for “Friction,” while Def Dee takes a cue from Black Milk with the bumping yet clean-cut “Blink.” Georgia Anne Muldrow cuts a slice of obstinate but catchy funk for the regrettably short “My Love.” Illastrate revisits the melodically rich days of late ’90s/early ’00s underground hip-hop with “Master Plan” and is given the playing time needed to build up his classy assortment of atmospheric sounds. Audible Doctor laces the 9th Wonder-inspired “Understanding” as Boogie shows how ‘artist development’ is a very personal matter:

“I was shook – couldn’t look the other way, though
Ain’t wanna look back and say I shoulda, coulda, woulda
But I couldn’t get out the way; thought about the friendships
Platonic, intimate all been sufferin’ since I started this music shit
Everybody love you till you can’t do what they want you to
Thought about them fellas who turned out to be possessive
More than that they was jealous, tryina stop me from excellin’
The fam that always asked: “What you doin’?”
Then they act like they do not understand
what it means when I say that I emcee
I ain’t hostin’ parties… Damn homie, work with me
I been writin’ poetry since I was 14
That shit was the only thing to ever keep me hungry
I never used to rhyme, though, I thought I sounded corny
till I started chillin’ with the homies and they showed me
Jumpin’ in a cipher I was wack at first
Took some work, then I started rhymin’ everywhere
Folks hated, I ain’t care
My homegirl Alana taught me how to keep my mind sharper
when other folks wouldn’t be bothered
I decided I could be a dope MC
Just had to change the scenery, go and do me comfortably
Couldn’t rest on co-signs, this here is me and my rhymes
This is the life I chose, Lord knows this shit is fickle
But long as I got two nickels I’ma move, I’ma prove
I can do it for myself, can’t rely on no one else
And I am built for it, solid to the core
Just need you to listen, nothin’ less and nothin’ more”

Has-Lo finally laces “Marinate” with a ruggedly wistful instrumental, turning the original album’s opening track into a meaningful closer. By the time Boog Brown ends the brief introspective verse of “Marinate” with “I am just a messenger / Listen – you could benefit,” she establishes a mystique that at times is sorely missing from her performance. Cuts like “Friends Like These” and “Shine” are not only far too conventional in terms of content, they also lack conviction. Her disregard for technical tricks is refreshing but not compensated by poetical acumen. When she quips during “Shine,” “You niggas ain’t news, you the funnies,” her emotionally deficient flow sucks almost every drop of venom out of it. Unlike the really good to great rappers in this game, Boog Brown is still among those who don’t sound like they really mean it. This impairs not just her battling attempts (“U.P.S.,” “Friction”) but also the more substantial song material. Nevertheless, with the right production underneath her and some more ‘time to build,’ Ms. Brown may just come back stronger.