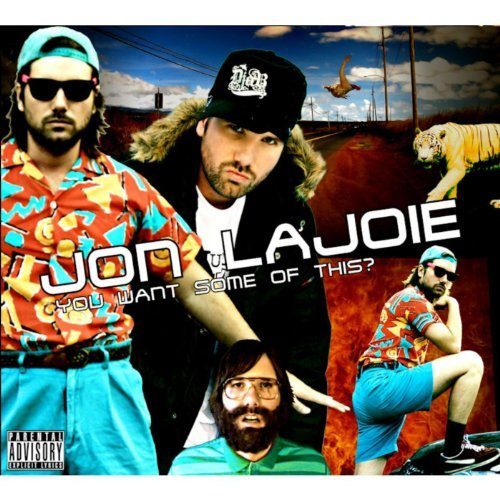 Jon Lajoie :: You Want Some of This?

2008 was the first time I heard the name Jon Lajoie, although he had been working as an actor and comedian in Canada prior to that. He would go on to achieve mainstream fame as the hapless stoner/musician Taco MacArthur in the FX fantasy football sitcom “The League,” but in between obscurity and TV success he became a viral YouTube sensation with songs like “Show Me Your Genitals.” I had NO idea what to make of him the first time I saw this video.

To call Lajoie’s rap style awkward might just qualify as understatement of the millennium. He comes across in the song like someone who admires everything commercially popular rappers have in their videos: nice cars, women with big asses and titties, and lots of money. After spending so much time being envious of their sex money and drugs lifestyle, he came to the conclusion most people who know nothing about hip-hop do: “Hey that rapping stuff can’t be hard! I could make up a rap song right now.” And so he did, but lacking a filter for crassness even Too $hort has, the song was hilariously offensive. The rapper in this song is like a retarded pervert who sneaks into dressing rooms to see women get nude.

“You’re talking to me about stuff – why?
I’d rather see your titties
Now you’re talking about other stuff – why?
I’d much rather see your titties
I can’t have sex with your personality
and I can’t put my penis in your college degree
And I can’t shove my fist in your childhood dreams
So why you’re sharing all this information with me?
It’s not sexist cause I’m saying it, in a song
That’s right bitch! Now take off your thong
and show me your genitals”

Lajoie’s joke was to portray a terrible rapper with crude lyrics and a total lack of swag who had never fucked a woman in his life. A 50 Cent or a Too $hort would say something like “Bitch I can fuck you right, let’s get it on tonight” but Lajoie’s brag line is “I can give good sex to you, cause I’m really good at sex.” FIFTY MILLION views later, Jon Lajoie had intentionally or not created an anthem for men fed up with being politically correct, and the joke was actually on him.

The wildly successful song required a follow-up, so Lajoie returned with “Show Me Your Genitals 2: E=MC Vagina.” If the joke went over somebody’s head the first time, there’s no way they could miss the parody this time, as now his awkward sexual come-ons came couched in even more awkward punchlines. The funny thing is that while the first song’s beat was an afterthought (and quite frankly bad), “E=MC Vagina” had a booming backdrop that wouldn’t be embarrassing to drive around to. For me at least this made the song ten times funnier than his first effort.

“You Want Some of This?” is where Lajoie really gets to flex his comedic muscle. It includes both of the aforementioned songs and a slew of other material – some rap and some not. We’ll get to the latter in just a minute, but for now let’s take a look at the rap for “Everyday Normal Guy,” a song which I’m sure inspired the name of his record label. Once again the laugh is found in your expectations of what a successful rapper should be – someone who brags about jet-setting around the world while drinking champagne. Lajoie might actually live that life NOW thanks to his hit TV show, but the protagonist of this song desperately tries to use the word “motherfucker” to add street cred to his completely ordinary life.

“I work at customer service for a phone company
I make twelve bucks an hour but that’s all I need
I live in a small apartment on a quiet street
I don’t go out too much, I like to watch TV
I cant afford a car I use public transportation
I don’t mind, I read ’til I reach my destination
Sometimes a newspaper, sometimes a book
The amount of money I save, the shit is off the hook
And I’m not very good with the women
I’m a pretty shy person and I’m average lookin
Last time I had sex was in 2003
And I am ashamed to admit, but it wasn’t free”

Lajoie surprised me yet again on this song by abandoning the awkward halting flow of his “Genitals” series. Despite self-deprecating lyrics like calling himself “the Pauly Shore of everyday life/easily forgettable and not very liked” the fact he flows smoothly and fluently on this song makes it the stylistic opposite of his viral video raps. With this style he COULD brag about how boss he is and come across as believable – except of course for the fact he’s Jon Lajoie. As seems to be a trend for Lajoie, this ultimately led to the musically improved production of the sequel “Everyday Normal Guy 2,” but it also led to the epic “Everyday Normal Crew” where he has an entire posse of average dudes who sit around and play Nintendo.

Ultimately I became a convert to Jon Lajoie’s humorous style of rap, especially given that the more songs he released, the better the production came on each one. Much like The Lonely Island, it’s easier to appreciate the joke when it gets paired up with bangin’ beats. The downside is the non-rap songs on the album. I’m not saying a song about having an orgasm “Too Fast” isn’t funny, but compare it to “Jizz in My Pants” and it’s not even close. It’s not just that Lajoie is singing instead of rapping, it’s that Lonely Island ramped up the comedy by having it happen to them in public while they were trying to be cool and impress the opposite sex. Where Lajoie’s rap songs come across as well thought out parodies of hip-hop from someone who actually gets the swag, his singing comes off as bad attempts to be like Weird Al Yankovic. His “Cold Blooded Christmas” is like a lame “The Night Santa Went Crazy” that I don’t need to hear more than once.

It’s unfortunate that ballads like “Song For Britney” and pothead anthems like “High As Fuck” drag Jon Lajoie’s “You Want Some of This?” down to being average. I understand as a comedian he needs to be versatile and not a one-trick rap joke, but as later songs would prove, Lajoie is capable of imitating a whole slew of different rap genres and styles in funny ways. It may be that he didn’t have the confidence yet to take it that far on this album, which is a shame, because if he had split this into a comedy rap CD that would have been a more enjoyable product. Now if you can find this disc used go for it; or if you just want a digital copy of all his funny raps without having to look them up on YouTube, click on the album cover

and Amazon will hook you up. I may not be a fan of his crooning, but in the incredibly narrow niche of comedy rap artists, he’s definitely on to something.

Jon Lajoie :: You Want Some of This?
6Overall Score
Music6
Lyrics6