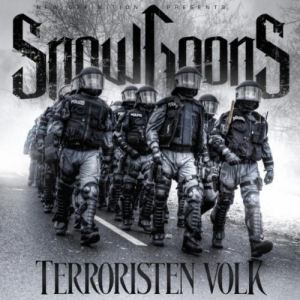 A German Snowgoons album has been some time coming. Despite being based out of Germany, the ‘Goons knew early on where they belonged – the American East Coast underground rap scene. It wasn’t until 2009 that they started to feature domestic rappers on their projects, namely the virtual Transatlantic joint venture “German Snow.” After extending their portfolio with full-length production gigs for M.O.P. and Reef the Lost Cauze last year, in 2012 the Snowgoons are ready for an entire album almost completely made in Germany.

Having a hard-earned reputation for being a rather one-track minded production team in terms of sound and philosophy, the Snowgoons make sure they stick to their script regardless of language. The album title “Terroristen Volk” (‘Terrorist People’) refers to a parody of a national social marketing campaign called ‘You Are Germany.’ In his video ‘You Are [a] Terrorist,’ visual artist Alexander Lehmann criticized intentions to curtail civil rights (especially the expansion of electronic surveillance) after the terrorist attacks of New York, Madrid and London. The clip’s audio opens “Terroristen Volk,” and while its smooth sarcasm isn’t representative of what follows, a deep feeling of distrust drives many of these rappers in a fashion international listeners are familiar with from Ill Bill, Immortal Technique et al.

On “Survival of the Fittest” Adolph Ghandi and JAW have visions of doomsday while New Yorkers Mobb Deep and Onyx voice theirs from the ’90s via cut-in vocal samples. Being grotesquely graphic is one thing (in that department the track certainly delivers), but the way JAW illustrates how it’s best to become ‘one with nature’ once civilization crashes is quite clever. Mobb Deep’s Prodigy is also sampled on “Endzeit” (‘Last Days’), where Toby Ses and Abroo give an extended update of his classic ’96 couplet “Illuminati want my mind, soul and my body / secret society tryina keep they eye on me.”

As expected, the Snowgoons and their guests paint the world black. “Your hate has made you powerful,” Palpatine baited Luke Skywalker, and unlike the young Jedi Paderborn’s Phreaky Flave embraces the dark side on the Star Wars-inspired “Dunkle Seite der Macht” (‘Dark Side of the Force’) with no hesitation. FaZ on the other hand aims to ‘Illuminate Darkness’ (“Erhelle die Finsternis”), while Ferum and BÃ©nja search for ways to rise from the misery in “Schatten der Wahrheit” (‘Shadows of Truth’). Meanwhile on “Killerinstinkt,” introduced by a ‘Matrix’ quote, Kamikaze sees the apocalypse as a cleansing, a chance for Earth’s rebirth.

It comes with the genre that some of the rappers resort to the form of expression they know best – battling. One of the most prominent features, Laas Unltd., doesn’t go any further on “KÃ¶nigshaus” (‘Dynasty’), while Abroo and Dra-Q, also known as Antihelden (‘Antiheroes’), effectively take apart the German scene on “Weckruf” (‘Wake-Up Call’). More substantial song material is provided by D-Irie, who contributes the album’s most realistic and current social commentary with “Produkt des Systems” (‘Product of the System’), or Amewu, whose slow and soulful “Futter Erde” (‘Fodder Earth’ – a play on ‘Mother Earth’) is a welcome change of pace and features seasoned reflections such as ‘Take intelligence, pair it with stupidity / and you end up with man’ (“Man nehme Intelligenz, paare sie mit Dummheit / und gelangt zu dem Ergebnis Mensch”). Lyrically, Cologne’s Revilo probably shines the most with figurative language and tight rhyme schemes (“Mikrokosmos”), closely followed by Absztrakkt, who brings his philosophical touch to “Von der Hand in den Mund” (‘From Hand to Mouth’) with lines like ‘Maybe we’re really only free once the power of love is greater than the love of power’ (“Vielleicht sind wir wirklich erst richtig befreit / wenn die Macht der Liebe die Liebe zur Macht Ã¼bersteigt”).

If the Snowgoons so far made every effort to become international players, with “Terroristen Volk” they show that their brand of hip-hop is truly universal. Chances are, they’d also be able to pull off a similar project with Scandinavian MC’s (after all, 2011 addition Sicknature hails from Denmark) or rappers from other parts of Europe – or the world even. After “German Snow,” they even prove they can hook up real bilingual collabos, see the outstanding back-and-forth between German rap doyen Torch and Boston’s Virtuoso, “Wie Kings” (‘Like Kings’ or ‘Vikings’). The latter’s bars remain the only cue for non-German speakers, but any rap fan should be able to appreciate classic material like “Pseudonym” featuring Mannheim’s Pal One, back in 2000 the first rapper to spit over Snowgoons beats.

I’ve counted 9 videos shot for “Terroristen Volk” and enjoyed every one of them. It’s evident that the Snowgoons know what they’re doing on virtually every level of the game. Still there’s the danger that Illegal, Det, J.S. Kuster and Sicknature eventually put quantity before quality, particularly when it comes to their core business – making beats. Their sound is more varied nowadays, unfortunately at the expense of sheer brilliance. Unlike many producer-helmed albums who are carried by the music, it’s the rappers who make “Terroristen Volk” work. In that regard the ‘Goons are well-advised to conceive their sound and philosophy as one because it ensures that their albums are more than never-ending cyphers about everything and nothing.