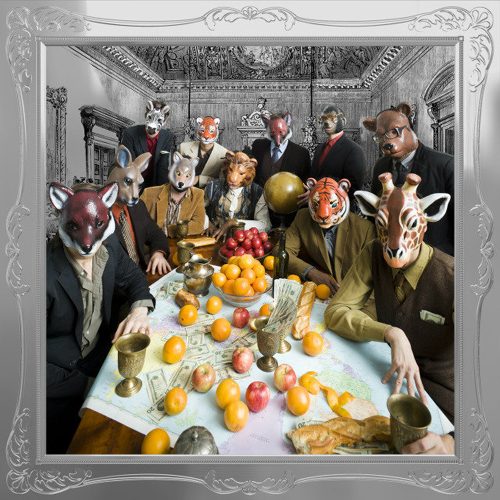 Antibalas are an 11-piece band from Brooklyn that have been perfecting their version of afrobeat over 14 years and five albums. The group is modeled after the late Fela Kuti’s Africa 70 band. They even wrote and performed the music for Fela! the Broadway musical based on the late musician’s life. Antibalas are not a mere cover band, however. They use the afrobeat template that Fela created, and add on to it other influences, including latin music, hip-hop, funk, and jazz.

Their latest album is their first with New York funk label Daptone, and in many ways sees the band finding their sound and their home. The band started out on dance label Ninja Tune, and their last album was on indie label Anti-, a spinoff of punk label Epitaph. Daptone is the label closest to the band’s spirit. The label is home of Sharon Jones and the Dap Kings, the Budos Band, and the Menahan Street Band. All of these bands make funk and soul music that hearkens back to pre-digital days, when it was musicianship, not production, that made the band. Antibalas’ latest album was largely recorded live, which gives the music an energy and vitality that you usually only get with a live show.

While the band’s sound has not changed dramatically over their five albums, this record sees them paring back their sound and presenting an even tighter package. Their earlier records had a stronger latin funk infuence which has been largely toned down for this album. Their political message has also been toned down, despite the bands active involvement in the Occupy movement. Earlier songs like “Who Is This America?” tried to wedge the band’s leftist politics into their music, and the end result was sometimes ham-fisted. On this album they follow Fela Kuti’s lead and go for a more obtuse approach to their lyrics. They still get their point across, but they do it in a less direct fashion.

On album opener “Dirty Money,” singer Amayo addresses the economic crisis by singing about how useless money is in many situations. He has a bark similar to Fela’s, and shares Fela’s Nigerian heritage. His voice is used more like an instrument rather than the focus of the songs. Most of the tracks have long instrumental intros before Amayo starts singing, and the lyrics are generally limited to a few verses. He never overpowers the songs, instead adding just the right amount of grunts and yells to spice the tracks up.

Whatever label you want to give Antibalas’ music, the bottom line is it is dance music. Their songs are all around eight minutes, with different elements working in and out of the steady rhythm. If it doesn’t get you off your ass you should check to make sure your legs are still working. Antibalas may be a multi-enthic group of Williamsburg hipsters, but they mean what they are doing. There is no ironic winking here, only committed musicians playing their heart out. The most exciting thing about Antibalas is the fact that they are preserving the skill of live musicianship, something that is increasingly rare in this digital age. I’m all about drum machines, sampling, and computer-generated music, but there is nothing quite like listening to eleven skilled players locked in a groove. Antibalas’ latest preserves the musical history of Fela Kuti, and is a hell of a good time.