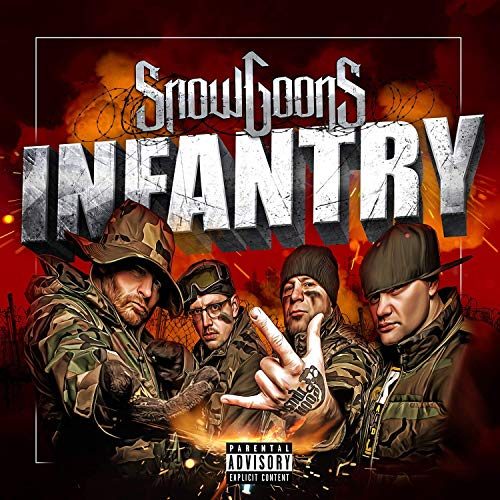 The Snowgoons, the name of the Germany-based hip-hop production team comprised of DJ Illegal, Det Gunner, Sicknature, and J.S. Kuster, have been reviving a near-lost art in recent years: Compilation albums consisting of exclusives courtesy of a well-picked selection of hardcore and underground hip-hop artists. But it’s not just the rappers they enlist for their albums, it’s also their beats, their almost-intuitive understanding that hardcore rhymers require hardcore soundscapes. Their sampled beats coupled with their gritty ’90s aesthetic is why hardcore New York City rhymers like Onyx and M.O.P. both vouch for and work well with the Goons (respectively, refer to 2014’s “#Wakedafucup” and 2011’s “Sparta“). Like fellow producer Apollo Brown, their name has become like a Nintendo Seal of Quality when attached to a hip-hop album, whether it’s a compilation, collaboration, or just one or two production features. Their latest release, “Snowgoons Infantry”, is an enlistment of rap soldiers armed with Snowgoons beats and lyrically living up to the “goon” portion of their audio benefactors’ name: “Hired to terrorize or eliminate opponents”. Take the opening track, “Goon Infantry”. Over a menacing violin sample and DJ Illegal’s taunting hook, Ill Bill, Nems, Sicknature, Nocturnal don’t just make their enemies’ lights go out: They make everything go pitch black like Mudcat Grant.

The second track, “Deli Cut”, features one of the hardest beats on this 21-track album. With dark piano cords and change-ups in the drum snares, its guest features (CRIMEAPPLE, Sean Strange, Flee Lord, & DJ Tray) reads on paper like one of those “Top 10 Underground East Coast Rappers You’ve Never Heard Of” lists you’d see in Complex Magazine. “4 Stripes” has the same tendency in terms of features (with Jay Royale, Fel Sweetenberg, Illa Ghee, & Ali Vegas), but both groups have the street-level grittiness that their respective beats require, especially the latter with its Stoupe-like production of hard drums overlaid by a sampled voice with haunting melodies. One of the highlights from the first third of the album is “The 90s Are Back Pt. 2”, a sequel to the original from 2016’s “Goon Bap“. The DJ scratching, frantic horn and string samples are a testament for why the Snowgoons have been praised for representing that ’90s New York sound. Also, though almost every track on this album can be considered a posse cut, this particular track’s line-up (AG, PMD, Smoothe Da Hustler, Mr. Cheeks, Edo.G., El Da Sensei, Drayz (Das EFX), Outloud (Blahzay Blahzay) and Craig G. goes a few steps beyond that.

The Jameson Whiskey-inspired Jamo Gang (Ras Kass, El Gant, and J57) made an appearance on “It’s Jamo”, but its Boogie Down Productions-derived hook and ominous piano keys overshadow the emceeing aspect. “Cold Facts” has a classic vinyl sampled blues loop given life by the inner-city blues lyrics courtesy of Reef the Lost Cauze, Skrewtape, and Mooch. “Real Like That” has a cinematic sound to the production, but falls because of the Mobb Deep homages from Big Noyd, Estee Nack, & DJ Robert Smith. “Rugged Never Smooth” is a Demigodz/Dope D.O.D./Snowgoons collaboration and makes this listener fiend for the Snowgoons to produce a full album with the Demigodz roster or just any one of their members. A murky head-nodder for certain, Celph and D.O.D. come through with some well put-together gutter rhymes, but Apathy has the best verse and dropped the heavy load first:

“Ayo, fuck competition, they’d rather see me dead
Wanna hire telepaths who try to hack into my head
But Ap will hack into your head with a hatchet instead
Detach your leg and leave you squatin’ like your hatchin’ an egg
I’m the reason why these rappers are dead
I kill their beats in my sleep, hit the alarm, and crawl back in my bed
Best friends with the Grim Reaper, I’m tight with the Crypt Keeper
I’m basically an assassin when you ask for a sick feature
All I do is spit ether, so either you ain’t listen
Or your brain’ll start bleedin’ out your nose from resistin’
Telekinetic torture, psychokinetic echoes
My daughter got a +shaved head+ and eats frozen +Eggos+
I kills suckas egos, bully bigger than Deebo
Who haites mainstream hip-hop, it’s too emo
Everything I touch turns frozen and dies
I’m producer to producers when I open my eyes”

Massachusetts natives and frequent Snowgoons collaborators N.B.S. appear on “Where We Started From”. While the aim of the track is a vivid account of nostalgia, its sole selling point in that regard is an overreliance on the vocal sample the beat is built around. Much of the second half of the album isn’t as stand-out as the first. “White Camouflage” feels more like spoken word raps (courtesy of Ankhlejohn) over a Blaxploitation funk loop with not much done to it. The following track, “Dragon Blood” by Nine and Ruste Juxx, is a very quick shot that gets the album’s energy back up. The “American Gangster”-sampling “Honesty & Hard Work” scores points because of RJ Payne’s intense raps and delivery. The single, “Golden Era” continues the nostalgic trend with Ill Conscious, Fredro Starr, and Jay Nice spitting rhymes conveying their own reverence for one of hip-hop’s most venerated eras. Even in the accompanying video, there’s DJ Illegal holding several different classic vinyl covers from that era to drive the point home:

Some of the better tracks around the album’s closing are “Exquisite” by K-Prez and “The Struggle Box” by Shyheim, iNTell, & Mr. Erbie, and a few tracks from some NYC rappers who I haven’t even heard of until this album. Overall, “Snowgoons Infantry” is a solid release from the Germany-based quartet, but not without its flaws which are more evident in the album’s latter half, particularly a reliance on beats fashioned after ’90s NYC mafioso rap productions. But what they’ve done on this release is enlist soldiers in their infantry who, for the most part, have proven to be lyrically locked, cocked, and ready to unload.