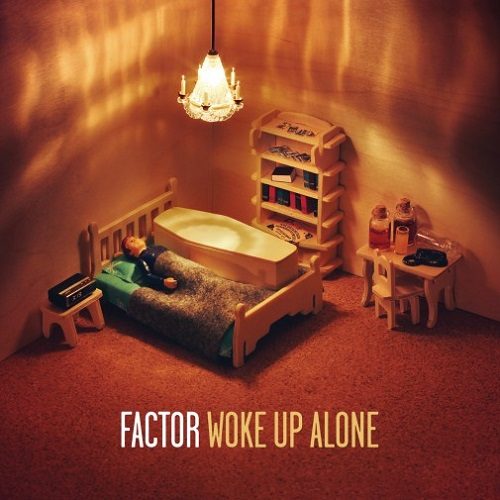 Saskatoon, Saskatchewan, Canada’s own Factor has made his living working with unconventional and at times polarizing rap artists. In fact I’ll be the first to admit when it comes to Factor, I often like his production as much or more than the people on it. It’s not that they aren’t talented or worthwhile – it’s that they all seem to crave the notion of being an eccentric misunderstood genius who makes avant garde rap music. That suits Factor’s production talents quite well, but often leaves you wondering what the appeal of the rappers themselves are.

Now let me be perfectly clear – I’m not saying that artists shouldn’t have lofty aspirations to make something of profound wisdom, timeless beauty that can cross generational boundaries to both entertain and inspire the masses. I AM saying that the masses aren’t always wrong to choose the entertaining over the dry and lifeless. “Fast 6” and “G.I. Joe 2” aren’t high art. In fact a lot of people would say they’re just a mindless pastiche of explosion porn and fighting sequences. Are you not entertained though? Perhaps not if you’re a cinema snob, but that isn’t who those movies were made for. I don’t want to turn this whole review into an editorial, so we’ll keep it to just this paragraph and move on, but personally I’ve always felt that a critic should avoid becoming pretentious and/or trying to shape the direction of the very thing they are trying to criticize. I’ve failed at that goal because it’s only human to fail when art and ego collide – your desire to want better music leads to you thinking you know what’s best for everyone.

In evaluating “Woke Up Alone” it’s fairly evident that Factor has considered the fact he may be making high art for rap snobs, but he’s also daring you to take the plunge like a French language film with subtitles. Is it easily accessible? No. If you’re the least bit lazy this is not the album for you. And while a comedy of errors can work in any language, a tragedy is often only appreciated by those closest to it. That’s going to make it difficult for Factor to bridge the gap from the arthouse to Gucci Mane – I’ll just go ahead and say that it’s impossible. It’s the size of the Grand Canyon. He’s not going to reach the people on the other side, and he’s made the decision to not even try that hard to do so – you get it or you don’t. On one hand that’s the very kind of pretentiousness I abhor, and on the other I admire the chutzpah and balls of making an album most people aren’t going to get just to satisfy your inner muse – let alone packaging it and selling it to those very same people. Perhaps there is some comedy to be found in giving people something they don’t want and won’t listen to that’s actually quite good.

Factor has conceived an album based on the five stages of grief – denial, anger, bargaining, depression and acceptance. This is heady, moody, dark and brooding stuff. He’s brought along his Fake Four friends to help him tell the story, such as the sing-song rapping of Ceschi on “Raise the Dead,” the soft spoken and harrowing flow of Open Mike Eagle on “Stone Cold,” and the abstract freeform streaming delivery of Myka 9 on “Denied.” The album progresses through these stages, carried by instrumentals at times and by the guests at others, and even if you don’t get it you can admire the elegant construction OF it. Conceptual rap doesn’t necessarily sell very well – that’s why Pharoahe Monch wound up doing songs like “Get the Fuck Up” – but that doesn’t mean it exists in a vacuum. “Woke Up Alone” isn’t for everyone, but that doesn’t mean it’s for no one. In fact the variety of contributors to Factor’s vision makes this one of his most wholly enjoyable albums – he orchestrates the broad brush strokes and lets the guests fill in the intricate details. And yes I’m calling an album that ends with “The Grave (Burial)” enjoyable, but I guess today was the right day to push that button. If nobody’s shoving high art down your throat, and you enjoy it of your own accord, it’s not pretentious after all – it’s just good.