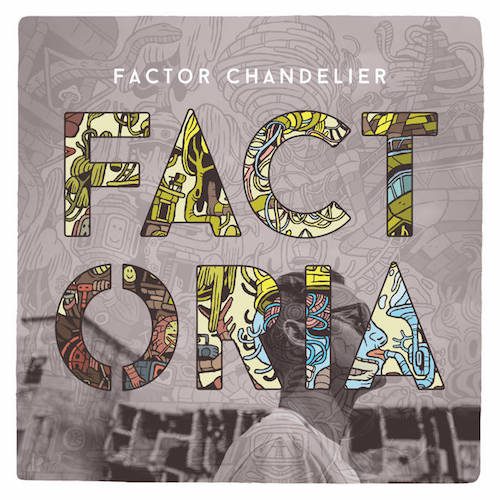 To dispel any confusion Factor Chandelier is the same Factor from 2013’s “Woke Up Alone,” who you may also know from his production work for Awol One among other people. He’s a hip-hop prodigy from Saskatchewan, a province of Canada that’s not necessarily the first one you’d think of when it comes to dope rap, although maybe it should be. Still I think you’d be in agreement with me when I describe it as “sparsely populated” given census figures have the total population as just over one million, less than 42 out of 50 U.S. states including Maine and Idaho. The summers and winters are politely described as “extreme,” and if you’re going to be trapped indoors for long periods of time, that’s an easy way to cultivate becoming good at producing beats and rapping over them. After that it’s just a matter of getting it out to the masses – and I mean beyond the borders of Regina or Saskatoon.

That’s never been a problem for Graham Murawsky a/k/a Factor, who has been making dope music since the late 1990’s with or without critical acclaim, but usually more of the latter than note. If anything he’s almost too prolific – a list of all his side projects, artists he’s produced for and albums he’s done would take up the entire rest of this review. Instead I’ll tell you that the non-rapping tracks on Factor’s latest album are just as good as the lyrical ones and in some respects better. You can lose yourself in the multiple layers of sound that Factor stacks onto each other for songs like “Silverwood Springs,” and one of the synths seems itself to be singing a melody to you like an alien whose only language is sound.

On the other hand I can’t blame you if you gravitate toward the songs that feature rhymes, especially since Factor has no shortage of incredible superfriends he can call in to add a few bars. Whether it’s Myka 9 on “Shoulders of Giants” or Open Mike Eagle on “Dozer II,” you could probably assemble one hell of a group just by putting all of Factor’s friends together – and “Noise Band” comes pretty damn close.

Every once in a while I come across an album that’s so easy to listen to I wish it was twice as long – and at 36 minutes “Factoria” certainly qualifies. Factor doesn’t reinvent the wheel at this point in his career, but he’s certainly put a nice set of all-season radials on this ride to get you from point A to B – a necessity travelling those long miles of both Canada and America when on tour. If that tour ever stops near me I’ll have to compliment Factor on how he keeps on coming back with more and more hits.