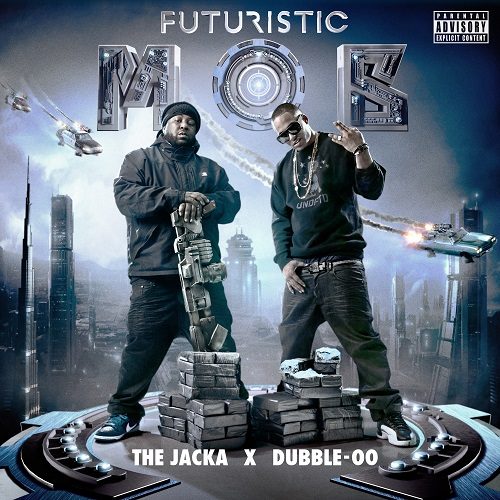 Visions of the future always contain a glimmer of hope because no matter how bad the scenario, there’s always the possibility for a savior to change the course of future history. NorCal rapper The Jacka is a very active hero of our time, going from one adventure to the next, releasing albums in short succession if not simultaneously. In view of this busy schedule Dubble-OO automatically gets cast as the apprentice here, perhaps not making his first ever appearance on “Futuristic Mob,” but clearly in the role of the sidekick. The meaning behind their joint venture, according to Jacka, is to fuse Jacka’s more traditional Bay Area mob music style with the apparently futuristic outlook of Dubble-OO.

As it turns out, this day is saved by the sidekick. The Jacka still possesses some of that seasoned-but-saddened charisma that made him a hood favorite, but he’s seldomly running at a 100% these days. Dubble-OO not only adds youthful abandon to the veteran’s world-weary reflections, he also emerges as a versatile vocalist, combining well-timed flows with exuberant outburts, even keeping ready a nice little surprise in the form of a Hot Boys homage on one of the later tracks.

“Futuristic Mob” is off to a great start with the duo of Pakslap and Bandit scoring the first four songs. “100 100’s” is, if that’s possible, simultaneously spheric and abrasive, a grand entrance that despite its sonically futuristic ambitions finds both rappers keeping it hood. Still the theme is already present lyrically, Jack often looking at things from a third-eye view (“People say we blind – but I still see / I’m just out my mind, I guess that’s what they mean”), Dubble taking things in with the enthusiasm of an explorer (“See me, HD, 3D, computer screens / Witness a nigga from nothin’ doin’ his thing”). “Time Standing Still” introduces an esoteric side to coke rap over another finely chiseled Pakslap & Bandit production, while “Aquarius” starts off like a West Coast version of a Flatbush Zombies track, before Dubble-OO gets into a heartfelt verse dedicated to a dead homie, matching The Jacka’s thinker pose. But it’s “My Dreams” that best showcases the thoughtful undertone of the project. To a cold but melodic production, Dubble-OO raps:

“And you can really sell the seats, take trips overseas
Spaced out, leaned up, do you know what I mean?
You can really change the channel, I ain’t talkin’ TV
Blasted high off life and I ain’t talkin’ ’bout trees
‘member as a little kid you had so many dreams?
And black people everywhere, we ain’t goin’ away
Read books and Scripture, now that’s literacy
So when I say Space Age, it’s what I really, really mean
I couldn’t sleep for three years, I woke up in my dreams
As simple as it seems, I seen it all in a dream
I was subconscious plottin’ ’bout changin’ my scene
I go way above your head, you need a ladder with me
[…]
If pressure bust pipes, then it changed my life
Like a diamond in the rough, but I was dirt in they eyes
I stay gasin’ all the time, every hook, every line
Hear the words out my mouth, you should study my lines
Liquid-twisted, soak in rays, in a daze for days
Deep like Nas and old Jay, Big Pun, Johnny Blaze
Rebirth of the greats when I take the stage”

Starting with track 6 (“In My Spaceship,” serving as a segue of sorts), the duo changes its tune to what E-40 and Too $hort labeled ‘function music’ last year, tracks that get the blood pumping rather than making it run cold. They go directly to the source, enlisting 40 and Droop-E for “VIP.” Tek of Portland group Chef Boyz contributes three lively, comparatively lightweight beats, “Wallet So Fat” being the reviewer’s pick. Traxx FDR laces “Bay Area Championship” with a banging Nicki Minaj sample, while DJ Fresh lays a Pharcyde quote atop deconstructed “Sucker MC’s” drums for “Excuse Me”. The subdued Pakslap & Bandit brand of Bay rap returns with “What Am I Supposed to Do” and “Hottest in the Summer,” where Jacka gets back into hood politician mode and OO works on his cred as a “real street cat”: “Presence of a G, so speak sincerely / In the presence of the G, so you better think clearly.” The Carlos-produced “Long Way” features the aforementioned Hot Boys-style hook and could pass as a Ryan Lewis track with its horns and pianos. “The Streets” caps off the album’s reflective side, due in no small part to a melodic hook from Arjay and a barren beat from Chef Boyz member Rob Banger.

If you subtract the vaguely conceptual decor from “Futuristic Mob” you still end up with a solid collaboration that makes plenty of sense. The Jacka and Dubble-OO aren’t particularly eloquent MC’s, but they can rap and their musical tastes don’t fail them very often. Despite its ambition to build “space age hood slaps,” the release sticks to traditional rap values – keeping things fresh and keeping it real.