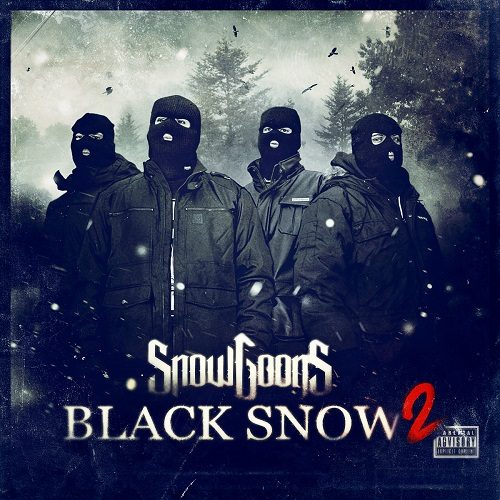 The weather has been acting up a lot lately, whether it be the baking temperatures in Australia, the constant floods in the UK or the Antarctic climate that the USA has been experiencing – the man upstairs clearly isn’t happy. If he was truly pissed, you can imagine something along the lines of yellow snow would be on the list of Interesting New Weather Phenomena that seemingly gets dished out on an annual basis. 2008 saw Planet Hip Hop on the end of a dose of “Black Snow”, courtesy of German storm-bringers The Snowgoons who were following their raucous debut “German Lugers” with a now trademarked blend of bastardised orchestras and intimidating violence-rap.

“Black Snow” was The Snowgoons at their best, before their formula was copied by other ultra-hardcore producers throwing violins and trombones in to their beats willy-nilly. There was of course hardcore hip hop in Germany (and throughout Europe) in the mid-2000s, but The Snowgoons started a trend that still continues today – American emcees and European producers. Of course, the Internet has helped this type of partnership blossom, but it was an agreement that works well for both parties. German hip hop is limited by its language, while American emcees are limited by their production choices since the money is no longer in that gritty boom bap scene. Many of those 90s boom bap rappers make much of their money from touring in Europe and it’s no surprise to see The Snowgoons’ albums are all largely made up of forgotten rhyme-slingers from twenty years ago.

Snowgoons’ albums are also predictably populated by underground heavyweights such as Ill Bill, Apathy and Slaine and judging by festivals like Kemp in Czech Republic (and to a lesser extent Splash in Germany) – the listeners are just as likely to be young, heavily tattooed white men from across Europe. This reviewer fits snugly in to that stereotype, but “Black Snow 2” throws up numerous surprise appearances from popular rappers that help elevate this album above the forgettable rut that Snowgoons’ last few releases found themselves in. You see, buried beneath the heap of street rap are gems such as “Suckaz Behind Screens”, a song all about Internet thugs and trolls talking crap behind a screen name. Reks and Edo G deliver the goods as you’d expect, but it also proves that the ‘Goons can show versatility when challenged. Q-Unique compares today’s hip hop scene to fast food restaurants, comparing the easy access and rapid rate at which listeners can indulge in tasteless, cheap rappers to burgers and fries on “Fast Food Nation”. The most moving track is inevitably the Viro the Virus solo offering “Dizzy Dreams”; hearing him talk about dreams and in his own words ‘self-proclaimed yearning’ – and having mysteriously died in 2012 it makes a strong (and remarkably light) production from the ‘Goons ascend to one of the best songs on the album. One track that should have happened years ago is “Do U Bac Down”, a collaboration between Onyx and the Snowgoons – utilising an epic production that isn’t far off of Dr Dre’s best work with The Game. Hearing the bald-headed, self-proclaimed ‘Black Vagina Finders’ paired with the German’s uber-imposing sound equates to the perfect song to play at the gym.

Philly is well represented by frequent collaborator Reef the Lost Cauze and Planetary (from Outerspace), with the majority of the predictable street tracks being more listenable than you’d think. “Still Real & Raw” isn’t as hollow as the name implies, bringing M-Dot, Jaysaun and Journalist 103 together on a satisfying New York-esque instrumental. Even Sean Strange, an emcee of the Vinnie Paz variety that’s gargled sandpaper one too many times (once is surely enough) manages to sound human on “Live Your Life”. Billy Danze shows he still hasn’t attended an anger management session, tearing apart “Make or Break” alongside forgettable (and shockingly off-beat) appearances from Aspects and Paragraph. Poor Bill, you deserve better than this. The ‘Goons have applied this technique to numerous songs throughout “Black Snow 2” – stick some unknown, green rappers on a track with a genuine legend in the hope that fans of the legend will have to listen to them. The ironic thing about this is that the tracks are often a big name rapper and a couple of “goons” on the other verses. Styles P has to “Walk the Streets” with Genovese, Raekwon unravels “The Code” alongside 2Ugli and LoDeck while Crooked I lets his hammer go “Click Clack” with Rasco (remember him?), Aims and Banish. Despite these mismatched collaborations, there are times where the Snowgoons assemble some eye-watering line ups that’ll satisfy many hip hop fans. “The Real Talk” throws Ice Water, Akrobatik, Virtuoso and Diabolic together for an example of emcees trying to one up each other, but “The Underworld Remix” takes the biscuit in terms of ludicrous line-ups. Bizarre (of D12), Reef the Lost Cauze, Ill Bill, Slaine, Celph Titled, King Gordy, SID (of Slipknot!), PMD, Sean Strange, Apathy, Swifty McVay (of D12), Vinnie Paz and Tech N9ne. And breathe. It’s ambitious but actually ends up being one of the weakest tracks. Being the final song on an album that’s TWENTY ONE tracks deep means you’ll be exhausted from the sheer number of rappers you’ve heard (nearly sixty!)

For the first time in the Snowgoons’ career, they have provided an album with moments of variety. “Black Snow 2” does suffer from a few derivative displays of traditional dick-slinging, verbal abuse and the underground’s superiority complex – yet where this has been the majority of the Snowgoons’ songs on previous LPs, it’s finally leaning towards the opposite situation. At least half of this album is good fun, whether it be the social awareness from Edo G and Q-Unique, or the hilariously OTT return of Onyx. There are too many posse cuts, but the gradual invasion of emcees who possess a genuine A-list presence (Raekwon, Styles P, Crooked I) lends the album a professional nature that their earlier work perhaps suffered from. There are still tracks where proud boasts of ‘being real’ and ‘preserving the art’ are delivered by sub-par rappers, but the Snowgoons have perfected their style of epic, cinematic hip hop backdrops to the point that the songs with meaningful content and a lesser brooding atmosphere actually surpass the usual ‘hardcore shit’ their fans crave. I forecasted “Black Snow 2” to be a dank, apocalyptic example of hip hop at its most aggressive, which although present, isn’t the overbearing avalanche it could have been. Well worth picking up.