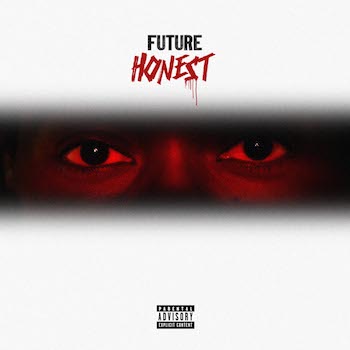 “Honest” comes almost exactly two years after the release of Future’s first major label album “Pluto.” That album inspired a “Pluto 3D” edition later in the SAME YEAR with remixes and three brand new songs. That should give you some idea how quickly Future took his already popular A-T-L mixtape rap-singing mainstream, and how eager the music industry was to cash in on Future’s crossover appeal. To be honest I was already growing disenchanted with how ubiquitous Future was when I reviewed his first commercial album. At the same time I still fuck with Drake and I know a lot of people who threw up their hands at “Hold On, We’re Going Home” and gave up on him. Coincidentally or not they collaborate on the Mike Will produced “Never Satisfied,” one of the album’s shortest songs.

As a longer song “Never Satisfied” would have been a single I wouldn’t be mad at, regardless of how overexposed Future AND Drake might be. If there’s one thing almost everyone can agree on it’s that Future drops catchy singles which rocket up the charts. Before this album had even been released there were SIX of them. Is that too much of a good thing? It might be. The latest though is arguably one of the best – “I Won” featuring Kanye West.

“I just want to take you out and show you off
You already know that you the perfect one
Girl when I’m with you, feel like a champ-i-on
Ever since I got with you I feel like I done won me a trophy
A trophy, I won me a trophy”

It’s more than a little bit sexist to refer to a woman as though she was a contest prize, but for what it’s worth he’s trying to be complimentary. Speaking of complimentary Metro Boomin proves to be a good production collaborator for Future. They handled the second single/title track, and also contribute to the deluxe edition with “How Can I Not” and the “Karate Chop (Remix).” Production is the best part of Future’s retail albums to date – he knows who to collaborate with and given how hot he is everybody wants to put their stamp on him. If anybody other than Metro has the inside track on being his best partner in crime it’s Mike WiLL Made It, who handled four tracks total on the deluxe album including his scatological single “Shit” and the heavy rotation favorite “Move That Dope” with Pharrell and Pusha T.

“Either way you put it, nigga, I’m good (turn up)
Triple salute, nigga, straight out the hood (turn up)
Bakin’ soda water splash the scales (scales)
Fork in my right and my pot in my left (left)
Leanin’ over, over to the side (whip)
I whip me a four way to a nine (whip)
The dirty, the money is homicide (woo!)
and my recipe can’t be televised (yeah)”

There’s no question Future is glorifying illegal activities here, although Pusha T provides some much needed balance when he raps the words “Young enough to still sell dope, but old enough that I knows better.” Guest appearances benefit Future heavily throughout the album. I’d quickly grow tired of him on “My Momma” if Wiz Khalifa wasn’t in the mix – particularly after he rhymes “bitch” with “bitch” for four straight bars (I won’t even get into the chorus). “Benz Friendz” is even more misogynistic than “I Won” but between Andre 3000 on the track and Mr. DJ on the beat it’s a bouncy track that feels like it could be the album’s SEVENTH single if they make a radio edit.

Andre: “I told the girl I’m ’bout to sell the Porsche, I’m tired of it
She go and told these folks I’m goin’ broke, a smile poured
from my lips, cause if I’m broke, it’s only hearted
Broken records from broken English, that’s all it
(Hol up) and if I were, why would you throw a party?
Affection is so convenient when ballin’
Correction: these hoes don’t mean it when fallin’
I guess that’s why Lois can’t be with Clark Kent”

I honestly went into “Honest” with low expectations, but as it turns out this album makes up for substance with slickness. Think of this album like a stack of pancakes – something that’s hard to go wrong with as long as you smother it in enough maple syrup and serve some bacon and/or sausage on the side. The entire second verse of “Look Ahead” is like that. Acapella I’d hate it – Future is just screaming at the listener about how great he is and makes some awful analogies to slavery – yet The Runners pour that maple syrup on it and it doesn’t taste so bad. His AutoTuned delivery should be vexing me on “T-Shirt” but Nard & B make the listener bop their head to the beat. Future shouldn’t work but does. The rational part of my brain screams no but Future got me again. At some point it may all fall apart for him but for now it’s all good.