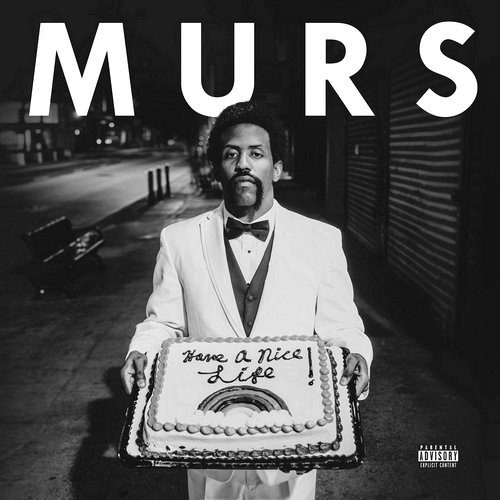 Murs :: Have a Nice Life

Los Angeles’ Nick Carter (aka Murs) is a hip-hop everyman. For over the past ten years, he’s had a steady output of albums that convey equal facets of both his humanity and his ability as an emcee. Since 2004, this listener has copped all of Murs’ collaborative efforts with producer 9th Wonder as well as those with Slug from Atmosphere under duo Felt. Over soul sampling beats and Def Jux soundscapes, he’s come out with braggadocio rhymes and weaved narrative tales that are relatable without being contrived. His latest effort, “Have a Nice Life”, mostly epitomizes the latter. Also, this is an actual solo album from Murs, it doesn’t follow the tried & true formula of one emcee/one producer.

After signing to Tech N9ne’s Strange Music early last year, he’s given birth to an album that’s an amalgamation of both his label’s musical leanings and his own. The variation of producers on this album has allowed Murs to experiment with different flows over modern-sounding beats. Does it work? For the most part.

The cover of the album is a black-&-white image of Murs holding a birthday cake with the title written on it. This is indicative of his sometimes-wry sense of humor which is now tempered with his enlightenment and maturity as a man. The record starts off with the title track consisting of a piano loop and introspective lyrics filled with insight and positivity. “No Surprises” is where his flow experimentation begins. Though it only contains two verses, Murs’ theme on this song is basically “live and let live” as he no longer has any sense of surprise in the turns his life has and could’ve taken for better or worse.

Over the wistful upbeat production, one of the lines he dropped that caught me was “After all you’d think they’d be thankful/But hoes ain’t loyal and niggas ain’t grateful/I ain’t hateful, way too blessed/Still getting mine so I ain’t stressed”. Murs typically tells interesting stories about his relationships with the opposite sex. On this song, the first verse is dedicated to his lamentation and eventual acceptance of letting go of a girl who was, in his words, a ho who made the swtich into becoming a housewife, but not his housewife. However, on the next track, “Mi Corazon”, he explores interracial relationships with him narrating in the first person.

Usually, when emcees rap about a topic that’s still taboo to an extent, it has to do with their lover being White. In this case, Murs’ love interest is a Hispanic. However, the opposition he faces isn’t from society, but rather his girlfriend’s brothers. It’s sort of reminiscent of Ice Cube’s romantic situation from 2000’s “Next Friday”. He has a flair for being descriptive and leaves no part of his canvas unpainted. Also, though he wears his heart on his sleeve, he doesn’t come off like a faux-macho crybaby in his romantic narratives like Drake. Things take a darker turn on “Woke Up Dead”. Produced by Jesse Shatkin, Murs’ urban paranoia about his environment takes center stage and transitions into the next aptly-titled track “P T S D”. Here, he takes a double-time flow and enlists Bay Area rapper E-40 for the second verse. Have a listen:

The King Fantastic-assisted “Two Step” certainly has the potential to be a club-banger, especially with the clever Jay-Z reference in the hook, but I feel that it sounds pretty similar to “Spaceship” from the 2012 MHz album. He slows it down on “The Worst” where he interpolates Biz Markie’s “Just a Friend” and flips that song’s idea by making it more about a married man’s temptations rather than a one-sided lustful tale. It sports both a playful beat and explores what goes on in a married man’s head when he’s with his side chick.

On “Skatin Through The City”, Plex Luthor provides perhaps the most chill Cali-sounding beat on this album. Over such a beat, Murs takes Lupe Fiasco’s skateboard concept from 2006’s “Kick Push” and applies it to his own experience as a Black urban youth who was into the sport if at least for transportation purposes. Personally, as one who skateboarded as a kid but stopped after caving into race-related peer-pressure, I totally relate to Murs’ line about “it ain’t weird to ride a skateboard if you Black now”. Speaking of race, it’s become customary for Murs to cover this topic as it pertains to women. On the Ray Charles-inspired “Black Girls Be Like”, he shines a positive light on Black women everywhere.

Though part of me wishes that Murs would make just one more album with 9th Wonder as sort of an epilogue to their musical odyssey, the change in his beatsmiths and life perspective is a welcome one. His self-awareness and spin on certain topics keeps him interesting. I admit, I find some areas of this album to be a little redundant. But despite that, I cannot fault or deny Murs’ strength as an emcee.