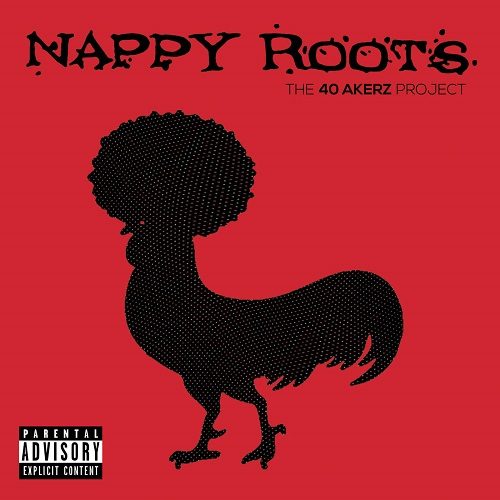 Back when the South ruled rap, Nappy Roots surfaced timely enough to snatch up a platinum plaque for their 2002 major label debut “Watermelon, Chicken & Gritz.” Since the follow-up “Wooden Leather” went gold, that particular kind of success has eluded them. Critical acclaim hasn’t waned, though, down to 2011’s collaboration with legendary Atlanta production powerhouse Organized Noize, “Nappy Dot Org.” However, the years took their toll on the line-up. Starting out with six members when breaking nationally, they operated as a quintet and quartet for an extended period, but on their latest the group Nappy Roots has essentially dwindled down to two vocalists. News chronology suggests various possible constellations, but fact is that “The 40 Akerz Project” sees the foursome of Skinny DeVille, Fish Scales, B. Stille and Ron Clutch split in half and Skinny and Scales proceeding as Nappy Roots.

Since the rap audience doesn’t insist on maintaining brands at any cost (rap groups are just not rock bands), perhaps the duo should have indeed rebranded themselves (actually a southern specialty) to 40 Akerz (as was the initial intention – tracks billed to 40 Akerz date at least back to 2010), but since they didn’t, “The 40 Akerz Project” is officially part of the Nappy Roots discography. At least this isn’t a Pharcyde situation as B. Stille features on a song and Ron Clutch has a skit named after him. Still “The 40 Akerz Project” is essentially a collaboration between Skinny and Scales and Atlanta-based producer 808 Blake. The rap crew Nappy Roots as such remains intact, but two of its core members try a little something different. The ‘Roots branching out, if you will.

“Country Boy Return” was last time, four years later Nappy are on a more now vibe, the two rappers sharing their insights and outlooks plus a couple of highs. They make you listen up early on with the super spheric “Party For the Ages,” which finds the duo’s voices laid bare, together with the slow pace and the careful diction contributing to a reflective joint that like much of the rest of the album thematically goes back and forth between living for the moment and leaving behind a legacy. While a number of tracks are characterized by a subdued mood, some seem to catch them on their way down from a high and at times it even seems that Nappy have caught the big city blues. “The Ditch” finds Fish Scales down and out after a night on the town:

“Another turnt up Tuesday
Fifth of Ketel One and a quarter bag
Trickin’ like we doin’ April Fools’ Day
Buyin’ everything a fool never had
Me and Ron Clutch killin’ PBRs
Hollerin’ at the moon, hollerin’ to these stars
ATL lights lookin’ no different
So I treat ’em no different – but I’m so belligerent
Swear I ain’t drunk but my Rover driftin’
I’m atheist, so I ain’t feel Jehova’s listenin’
Throwin’ rent money at some hoe that’s strippin’
I’m out here exposed so I know I’m trippin’
Woke up in a ditch that morning, brah
The only thing was missin’ was the coroner”

In the second verse, Skinny gets up and gets out of his ditch, realizing that “them 40 Akerz don’t be shit if I’m a rotten corpse.” These existential musings are set to a wistfully distorted melody in minor and heavy drums. Singer Micah Freeman frames the song with a chilling chorus, his second appearance after “Doesn’t Matter,” another snapshot of night life and internal monologue, whose electronic pulse first quickens and then thickens into a dance track as the rappers drop thoughtful lines like “Think I lost [my] religion ’bout same time I heard R.E.M. / In my momma car hollerin’ ‘Fuck the world,’ nigga carpe diem / We gotta raise up cause ain’t nobody gon’ save us / What if I told you that what they told you was made up?”

While some of the album’s tracks present 40 Akerz somewhat forlorn under the big city lights, they explicitly maintain their small town charm and calm and civil rights consciousness, whether during the goth trap of “Tokyo” or the meditative “Party For the Ages.” With the exception of the Jarren Benton-featuring “No Idea” their recreational drug use rarely turns reckless, and once they’re sobering up and come to their senses, they usually don’t fall into depression but remain optimistic. “I’m gettin’ everything my psychic said I should,” they state on “Ms. Cleo,” and from the sound of it they’re mostly getting good things.

Nappy Roots have come a long way from forming 20 years ago at Western Kentucky University. For a time they were in tune with the rap mainstream, selling hundreds ouf thousands of records, working with Kanye West and Lil Jon, being chosen to represent modern southern music on the soundtrack for Tom Hanks’ ‘Ladykillers’, etc. In 2015 Skinny Deville and Fish Scales establish in a honest, compelling way that they’re still the same people. They’re the same multidimensional characters that made them so refreshing at the beginning of the new millennium – humorous, sassy, stylish, down-to-earth, pensive. 40 Akerz may have been promoted as an “indie underground hip-hop group” a couple of years ago, but their album stands head to head with competition in today’s level playing field. Production team Super Market Knife Attack (mainly represented by 808 Blake, with minor assistance from Kato) subtly score the whole thing with modern flair. Even when “Party For the Ages” stretches from DJ Screw to drum-n-bass it remains cohesive, and while the swinging “Hazy” or the upbeat, piano-driven “Melting Pot” could signal a musical departure (back into the past), the MC’s anchor the tracks in the present. Just not without losing sight of the whole. As Deville signs off “Melting Pot”: “It’s all subliminal, from what you hear to what you see / All I ever tried to be is only me, Skinny D.”

“Window” explores crossover territory with the proven formula of pop-singer-opening-rap-song, yet not in an unpleasant way. Madison Laughridge simply lends her melancholic mood and the song itself is filled with evident substance. As much videos as were shot for this album, “Window” should have been considered. Identifiable negatives include the apolitical nature of a song named “Call the Cops” and the abscence of lower-range vocalists, but if you accept “The 40 Akerz Project” for what it is, it’s a commendable contemporary effort. By the time closer “Feeling Like” finds Scales and Skinny reflecting on time and age, you might even get the idea that “The 40 Akerz Project” is the Nappy Roots version of Goodie Mob’s “Age Against the Machine.” Either way they have transformed the original concept of what was going to be called “3 Days Off the Deep End” into a more lasting opus, one that most definitely becomes the Nappy Roots catalog.