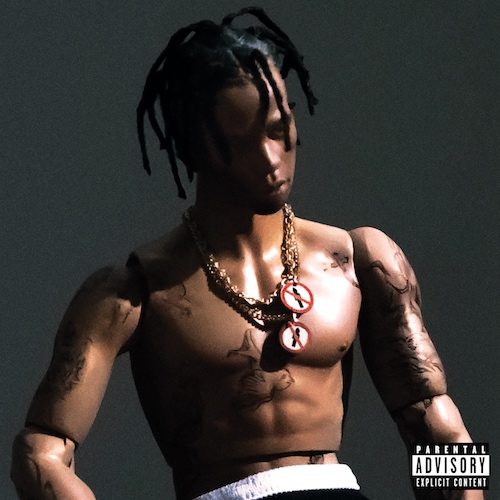 It looks like Travis dropped the Travi$ spelling of his first name a couple of years ago, shortly after he was named as part of XXL’s Freshman Class for 2013. I had gotten so used to typing the $ in his name I had to purposefully go back and omit it several times from this review. The irony is that Travis is definitely MONEY right now. The second single off “Rodeo” has been climbing the charts and booming out cars ever since it dropped, leading some to think he’s the “Antidote” to whatever ails hip-hop from your point of view.

For those not familiar with Scott though (real name Jacques Webster), here’s a brief primer. He’s a Houston, Texas born rapper who had a taste of college in the early 2010’s, then left both school and the Lone Star State behind for the music scene in Los Angeles. He was in and out of a group, he was discovered by T.I. and Kanye West, he got some major buzz thanks to the aforementioned XXL plug, and he released a heavily downloaded free mixtape called “Owl Pharaoh.” Fans have been waiting for his official debut LP ever since, and the long awaited “Rodeo” finally arrived last month. To hear Scott tell it, the title reflects the circus his life has become since blowing up a couple of years ago. The album’s first single “3500” featured both 2 Chainz and Future.

From what I can tell though “3500” was a “street single” to promote the album’s upcoming release, because no official video exists for the song. “Antidote” has been heavily viewed though – over 10,000 plays as of this writing. Scott appears to be standing at the center of a dust storm, possibly generated by the car doing donuts around him, while women in dayglow paint and outfits dance seductively through cage bars. It definitely LOOKS like a three ring circus, and Scott is the ringmaster, with all of the action figuratively and literally swirling around him. Occasionally the camera pans up to a full moon with what appears to be bats flitting across the sky – very apt given when I’m writing this review.

I’ve dissected and digested the hour long “Rodeo” several times, and I’m still trying to get a handle on what Travis Scott wants to be. I’d expect an artist annointed as the next big thing to have a more distinct and unique personality, but half of him sounds like Fetty Wap and the other sounds like Future. If you put all three on a mixtape and didn’t label the tracks you would find their AutoTuned deliveries to be largely interchangeable. As I’ve noted in other reviews it’s the sound of what’s poppin’ in hip-hop today.

Scott has the right producers working with him to capture the style, and there are some clever tweaks to the formula to be found. The Frank Dukes/Ritter/Bidaye “Maria I’m Drunk” featuring Justin Bieber and Young Thug actually SOUNDS drunk, with piano notes that warble like they’re poorly tuned or heard wrong through an alcoholic fog. Scott contributes to production on “Apple Pie” along with Dean, Terrace Martin and 1500 or Nothin. This song is heavy on the ivories too at the start, but it’s a melody that carries over even when the track jumps into electronic synth. Scott caught me slightly by surprise when he drops a DJ DMD reference – a reminder that he does originally hail from Texas even if his sound isn’t identifiable as such.

Travis Scott not only cultivated the right producers to achieve a cool 2015 sound, he made connects with all the people you’d want to make a cameo that are hot in his demo, from Chief Keef to Quavo (Migos). It all feels carefully planned down to the award show style theatrics of Kanye West for “Piss On Your Grave.” If it’s possible to be this manufactured, this similar to already popping artists, and this commercially oriented and still be good, then Travis Scott’s “Rodeo” isn’t that bad. The rare moments when his personality comes through actually make me want more, such as his quickly spit raps on “Pray 4 Love” featuring The Weeknd. He sounds like a young pissed off Kanye:

“I mean I’m, aggravated, agitated, I admit
Intoxicated, animated, got me feelin kinda lit
Contemplatin fornicatin, might as well fuck up some shit
They lookin’ at me way too crazy, got me feelin communist
But I’m just tryin to save the throne, pray for bones, pray for sticks
If my album never sell, then we gon’ hit that lick
Tell Lamar, call up Cash, tell him buzz me at the Ritz
It’s +The Weeknd+, we off the deep end, you need to pray for us”

“Rodeo” is a slickly stitched up album that does all the things a young hot rapper should be doing, but I fear that the essence of what could really make Travis Scott an interesting “Freshman Class” worthy artist will get lost in the rush to top the charts and sell millions of units. It took me a while to find the glimmer through the carefully orchestrated grime, but somewhere beneath all the hype and production he does shine through. I can’t escape this feeling the music industry may spit him out once the Fetty Wap flavor is gone and people have moved on, so if that happens I hope he falls back on the skills that brought him to the dance to begin with.