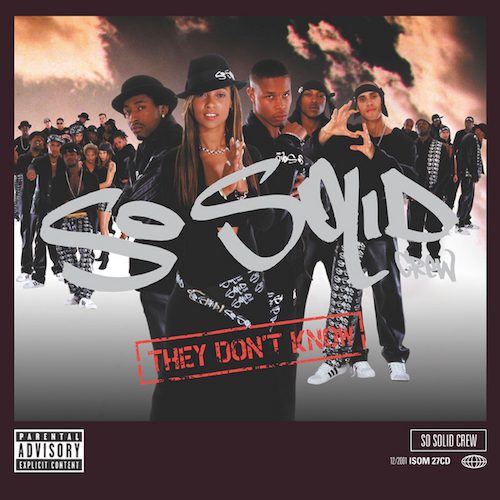 So Solid Crew :: They Don’t Know

A period of time to many, but mention this three word phrase in the company of a Brit in their 20s, and you’ll likely be greeted with a “tut tut” to follow. They aren’t necessarily tutting your time-telling skills, but reciting back the classic Garage single from 2001: “21 Seconds” by So Solid Crew. This single was so huge that it almost single-handedly pushed UK garage from the sun-soaked party anthems it was known for, towards the gritty, street crews that aligned themselves with Grime in subsequent years.

I was 14 at the time, and this song was huge at school – everybody had it on their Nokia phones as a ring tone. Everybody had their favourite verse (Romeo’s, naturally) and while Garage as a genre has disappeared off of the map for many, this album found itself in to plenty of homes. “They Don’t Know” hasn’t aged particularly well however, when compared to other popular rap albums of the year, in fact listening in 2015, it’s clear that the crew carefully balanced the line between big budget productions and material that’s recorded in an up-and-comer’s bedroom.

The best tracks are those that stick to the usual Garage sound – thick, warped bass and quick, light snares. The remix to their debut smash “Oh No” is club fodder yet remains enjoyable thanks to Lisa Maffia’s vocal work – arguably her best. As the lone female in a male-dominant crew, Lisa’s delicate presence is very welcome even if her vocal range is decidedly limited. Outside of “21 Seconds” which is oddly placed at the very end of the album, “They Don’t Know” is the focal point with its “WUB WUB”-style bass-line – think dubstep without the extra loud snares. It even comes with an alternative version immediately after – “Envy (They Don’t Know)” is a remix, but this time with Ms. Dynamite tearing the mic to pieces, before she drifted in to R&B territory in the coming years. It’s easy to forget how good an emcee she was.

While So Solid Crew are clearly British, there are moments that highlight the US-influences that the artists draw from musically. The use of “bitch” and “nigga”, two words that have never been as prominent in British music as they have Stateside, are indicative of the influence American Hip Hop had on England at the turn of the millennium. This was the era of Ruff Ryders, Roc-A-Fella and Murder Inc. and countless Hype Williams videos being flown in from across the Atlantic. Some pointless skits are very much the product of this, also.

The aforementioned “21 Seconds” is a classic, whether you like it or not. Assigning every contributing member a mere 21 seconds to give their input, means that everyone puts in one of their best performances on the whole album. It’s nothing more than mere braggodocio, but just as old school Hip-Hop rappers focussed on making their presence known through flow and technique (granted, an over-generalisation), it’s what Garage was all about. Getting the party started with snappy rhymes that complement the quicker BPMs. Romeo’s verse is my personal favourite, although it’s hugely benefited by that incredible bass drop.

Given how large So Solid Crew were, they rely on a few emcees to carry most of the tracks. Romeo, Megaman and Asher D hold down the majority of the album, along with Lisa Maffia’s melodic rhyming. Lisa’s style is very divisive, but an essential part of the So Solid sound, and listening back to this album it is noticeable how rough around the edges some of the emcees are. This was inevitably part of the appeal, paving the way for entrepreneurial, independent teenagers wanting to emulate the rags-to-riches tale of many an American rap group. So Solid Crew personified this, and much like The Streets, felt like a very real, tangible alternative to the shiny, expensive looking mainstream music that Tim Westwood was playing every weekend on national radio. Outside of “21 Seconds”, their influence on the mainstream is minimal, but it helped spawn various pretenders soon after their momentum started to dwindle, namely More Fire Crew (Lethal Bizzle’s group) and the unrealistically named Genius Cru. Excluding Lethal Bizzle, who has made a career from short, snappy singles such as “POW!” and current favourite “Fester Skank”, Garage crews quickly faded away.

So Solid Crew could have been the UK’s equivalent of the Wu-Tang Clan if their members had a focussed identity and sustained a unique sound. I feel they were too hasty to launch solo careers that aimed to jump on the bandwagon of what American artists were doing at the time. Romeo’s collaboration with Christina Milian on “It’s All Gravy” being a perfect example, and the complete opposite of what made So Solid so interesting. They were quickly outshone by Roll Deep Crew and its leading star Dizzee Rascal as Garage emcees adopted darker productions, which you’d think a 30-deep crew would be perfect for. “They Don’t Know” is little more than a historical curios for international Hip-Hop fans, but given how influential it was, it remains a key moment in British Hip-Hop, even if it isn’t a great record.