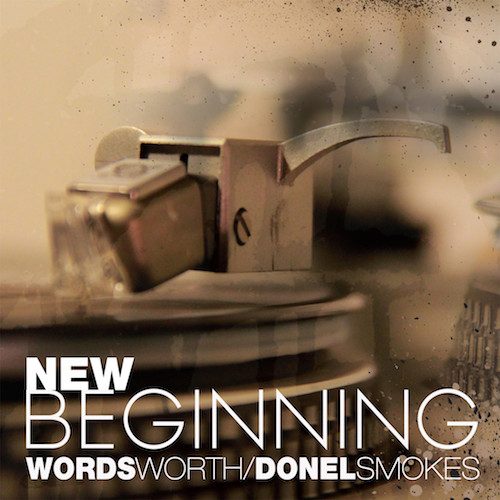 Over ten years ago, RapReviews.com put me on to Wordsworth’s “Mirror Music”, and it remains one of my favorite hip hop albums to this day. It was one of few CDs that I’ve studied the rhymes in the liner notes, and it surprised me how complex Wordsworth’s flow was whilst remaining completely down to earth. He was telling stories yet packing in intricately written verses that are normally reserved for pure braggodicio.

Following the disappointing “The Tonite Show” from eMC earlier in the year, “New Beginning” is a very apt title. With Punchline leaving Stricklin, Wordsworth and Masta Ace to keep the eMC name alive, Wordsworth lost his partner in rhyme of twenty years – musically at least. “New Beginning” is a damn good record though, one that steers clear of the corniness affecting “The Tonite Show”. This is proper grown-up Hip-Hop music.

Donel Smokes is largely unknown, but instantly proves he is capable of crafting some truly timeless music; “Spanish Guitar” and “Test of Time” highlighting this. The former is a filthy head-nodder reminiscent of Da Beatminerz’ best work showing Wordsworth can mix it with the more aggressive emcees; the latter is just as satisfying, but touches on the more serious theme of death – specifically his wife and the prospect of potentially witnessing her breathe her last breaths.

There’s a more mature selection of themes tying the strong production together. Charitable behavior and the feeling of being taken advantage of (“Help”), maintaining a positive attitude and believing in others’ abilities (“Believe”) and forgiveness and regret alongside Masta Ace on “Another Day”. It’s a very adult record, and thanks to Wordsworth’s storytelling skills, it’s often difficult to gauge whether every tale is personal. What I love about Wordsworth is his relatability – he’s still a regular guy, it just so happens he’s an excellent emcee. He tells us he listens to Coldplay and Adele rather than underground Hip-Hop, which is hugely refreshing. Granted, he does let slip he listens to Pharcyde and Redman’s “Dare Iz A Darkside” on the closing track “Validated”, but the song itself is a thank you to the fans and the industry that has supported him.

While I wouldn’t consign Wordsworth to the dreaded ‘conscious rapper’ group of rappers, “Do Good” does show that side of his character, with Chali 2na assisting with an intricately delivered performance. It’s a collaboration that makes perfect sense since both men have made careers from stealing songs, utilizing their hefty vocabularies and refined verse-writing abilities. They mention how music shouldn’t be plain and simple, but should stimulate the mind as well as the ear. It’s a fair point, but there’s a time and a place for the various types of Hip-Hop.

The majority of “New Beginning” is on that thumping soul vibe that Wordsworth has become known for and it suits him to a tee. Where 2012’s “The Photo Album” disappointed, with some beats being too disparate, Donel Smokes is a natural fit and he captures the Wordsworth of ten years ago. More importantly, there’s chemistry between Donel Smokes and Wordsworth that has given Wordsworth his best work since the “Mirror Music”.