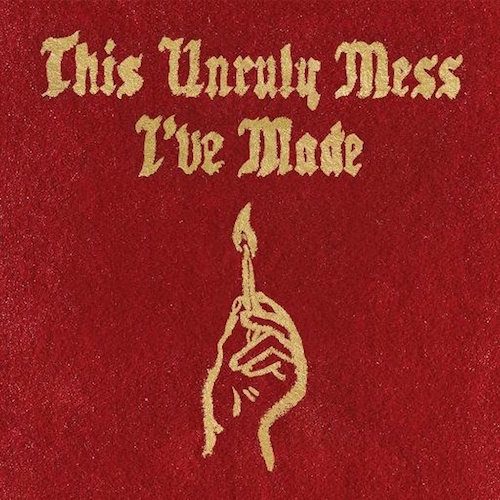 Macklemore :: This Unruly Mess I’ve Made

The Seattle-based Macklemore & Ryan Lewis have become a polarizing duo within the hip-hop community as well as across pop music landscape in general. They started in the underground which is where I first heard Macklemore via “Close Your Eyes” on CunninLynguists’ 2009 release “Strange Journey, Vol. 2”. I didn’t hear his raspy voice again until he practically kicked down the door of pop mainstream with the tongue-in-cheek “Thrift Shop“. In 2013, I couldn’t go into a supermarket or a fast-food joint without hearing it, as well as the upbeat “Can’t Hold Us”. Gaining four wins (three in the rap categories) at the 2014 Grammys caused outcries of racism and White Privilege as many people, including myself, believed that Kendrick Lamar’s “good kid, m.A.A.d. city” should have won the award for the top rap category.

Macklemore & Ryan Lewis have been accused of cultural appropriation and even pandering, but neither of those are true. What many people fail to recognize is that they are independent artists who had a huge breakthrough. They aren’t products of the major labels that manufacture transitory assembly-line stars, keep them in monetary debt, and prohibit true artistry. Their 2012 debut “The Heist” was just an O.K. album in my opinion. I liked the production as well as Macklemore tackling issues that hip-hop mostly shies away from, but I wasn’t exactly thrilled at his technical ability as an emcee. I thought they’d go the way of Lauryn Hill: Releasing a debut album that’s awarded with several accolades and then never to be heard from again. That changed when they released singles from their most recent album that showed people more than just a return. Similar to De La Soul’s second album, “De La Soul Is Dead”, the Seattle duo created a sound that dispels popular notions of them. Given their success, detractors, and shifts in their respective personal lives, their sophomore album turned out to be better than I expected.

The album starts off in full-storytelling mode with “Light Tunnels”, a recounting of the duo’s night at the 2014 Grammys and Mack’s experience about being there. With this album, they set out to prove that they are indeed hip-hop. The second and third released singles convey this message in the form of homages, of sorts. They upbeat “Downtown” kind of picks up where “Thrift Shop” left off. Lyrically, Mack takes an old school flow and narrates a first-person story of buying a moped simply for the hell of it. Upon the debut of the song and accompanying video, its real surprise was that they both featured rap pioneers Kool Moe Dee, Grandmaster Caz, and Melle Mel. I personally and unexpectedly found myself taken with both and, at the same time, understand why some people think they have “hipster” written all over it. But if someone like Jay-Z were to do the exact same thing, those people wouldn’t much, if anything, say about it all.

The latter single “Buckshot”, is a love letter to East Coast hip-hop from the ’90s. Featuring a verse from the Blastmaster KRS-One and scratches courtesy of DJ Premier, Ryan Lewis really shines as a producer with the beat he provided on this one. With dusty drums, click-clacking spray cans, dark piano riffs, he provided the most apt urban sonic backdrop for Mack and KRS to shine a light on their past shared hobby of graff-writing. For me, it’s certainly one you can nod your head to:

As far as the lyrical side of the album goes, Mack adapts his flow to Ryan’s varied beats. His topics range from funny, heartfelt, melancholy to serious. “Brad Pitt’s Cousin” has a middle-eastern sample and frenzied drums and contains some of Mack’s more playful lines:

“Wait, is that us on the radio
It’s what I always dreamed of
Back when I had peach fuzz
Shoutout to the homie D
Who’s D? Deez nuts
I’m eating chicken wings and onions rings
If you’re wondering, yes, I does my thing
And another thing, no puppet strings
On the company, we sucker free”

The first single released last year had Mack at his most introspective. Conveying his thoughts and fears as a father-to-be, he ponders out loud on “Growing Up”. He gives advice to his daughter as he imagines her at all stages in her life, which is juxtaposed by his own admission (via Ed Sheeran’s hook) that he himself is still growing up and learning about life. On the anti-drug track “Kevin”, he gives a tribute to his friend who died from overdose. He shows his humorous side once again on “Let’s Eat”, a wry ode to junk food and the struggle to become healthy amidst constant food temptations.

For me, the weakest tracks on the album are “Bolo Tie” and “St. Ides”. For me, it’s the fact that the beats on both overshadow the raps to the point where the aforementioned tracks tower over them. The most recent single, “Dance Off”, is made for exactly that: Dancing. Featuring Idris Elba and Anderson .Paak, the bouncy beat has a crescendo that builds in certain parts, as though two dance crews are about to square-off against one another. The album is closed off with “White Privilege II”, a sequel to his 2005 track of a similar name. For nearly nine minutes, he examines his own place in hip-hop as a successful white rapper and how all of his actions are now suspect because of it. When “Same Love” dropped, he was accused of attempting to inject a homosexual “agenda” into hip-hop. He’s been accused of taking hip-hop and watering it down with pop. If he shows up supporting protestors at marches, people stare at him and wonder why he’s even there. He touches on all of these events and acknowledges that being white has given him an unfair advantage from the jump.

In his analysis, nothing he says is untrue. Nearly fourteen years ago, Eminem posited the same idea in his song “White America”, examining how his skin color is a major factor for his huge success in a black art form. Macklemore’s most ardent opponents make me view him like the reformist character of Bunny Colvin from “The Wire”, summed up by this quote from the character: “Seems like every time I open my mouth in this town, I’m telling people what they don’t wanna know!”

As I stated earlier, this album was better than I expected. Despite some lyrical flaws here and there, it still shines. Ryan Lewis produced the album in its entirety and has proven to be a versatile hip-hop beatsmith who should no longer be slept on. His use of horns and the piano brought out the more evocative parts of the album. Macklemore himself sounds better on this album than his studio debut. He tries out different flows though he still maintains his raspy, laid-back delivery on most of the tracks. The use of sung hooks on most of the songs may be viewed as overblown, but I thought they added to the mood of those tracks. Along Anderson .Paak’s “Malibu” and Statik KXNG’s self-titled album, “This Unruly Mess I’ve Made” another 2016 hip-hop release that’s worth the buy.