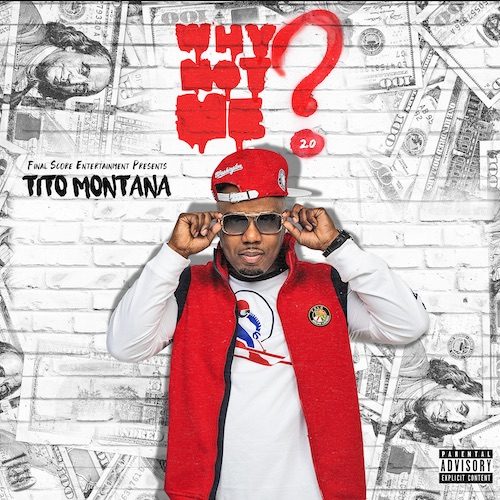 There are no shortage of rappers who want the last name Montana, and the reason why is so obvious it largely goes without saying. Sadly most of them fail to achieve cinematic heights in their artistic endeavors. From Antonio Montana to French Montana to Montana of 300, I can’t say any of them have really lived up to that moniker. The latest to enter this fray is Tito Montana with his “Why Not Me? 2.0.” If you’re wondering what happened to version one I can’t tell you the definitive answer — sorry about that. My educated guess is that after he got some notoriety for the song “Mr. Now” he took a previous release and repackaged it with additional material.

You can’t necessarily blame him for that since he’s working with Vinny Idol on the lead single, best known for his bangers for various members of The LOX. The connect makes sense because as Montana himself says on the track, “I rep a small town (in) upstate New York, about an hour 15 minutes outside the city, Poughkeepsie.” At an estimated 32,000 people I wouldn’t call Poughkeepsie small per se, but it definitely is if you’re going back and forth to a huge metropolis like NYC to network and build up your rap career. Montana’s bio says he’s been at this since the 2000’s, founded his own label Final Score Entertainment in 2009, and toured Europe with DJ Tek Won in 2016. Fascinating. How’s the music though?

Not bad actually! Tito might be the first “Montana” to impress me with his bars, and his “Must Be Crazy” collaboration is a good example. Instead of simply bragging about what a big shot he is, how much he drinks and smokes, or how many women he can lay, Montana atakes the time to tell you a story and draw you into his narrative.

“I came up on the other side, dope fiends, homicides
Coke dreams — I would lie, in my bed, open eyes
Staring at the ceiling, water drippin, bucket on the floor
Radiator blowin steam, padlocks on the door
Mouses on the sticky trap, vultures in the ‘frigerator
Corn Flakes in a box…”

Over the Vinny Idol piano and drums, Montana paints the portrait of his long struggle upward from poverty while a repeated sample (I suspect I know the source but can’t confirm it before this review) rants about how “pants below your butt ain’t breakin no law” to which skeptical listeners insist he “must be crazy.” A few places have tried to make it a crime but to me the point is not “crazy” at all. It is and always has been a rebellious form of fashion and the last time I checked fashion itself was not a crime. Hip-Hop fashion was being crucified back in the 80’s and 90’s long before sagging pants went mainstream so to me it’s nothing new.

Over the course of the approximately half hour long “Why Not Me? 2.0” Montana experiences both musical highs and lows, alternately raising my expectations and dashing them just when I get into his groove. “Milly By Summer” seems to fall into cliched tropes about hustling and the instrumental’s reversing reverberation just grates on my ears. “Lyrical Therapy” though and in particular the bonus remix featuring Jaquae, Chris Rivers (son of Big Pun) and Mysonne suggest that Montana MIGHT be able to break out of a crowded rap field and get noticed.

I’m not yet ready to say that THIS Mr. Montana is finally the one we’ve all been waiting for, but he at least appears to be a step in the right direction. Ironically while his namesake was a fictional character with an appetite for success and an unlimited ability to achieve it by violent means (whose only code of ethics was to not harm kids), our protagonist here is a hustler who would rather achieve his dreams by much more peaceful means. He may have grown up in poverty eating cheese sandwiches, but Tito Montana aspires to use a gift for storytelling to both show you his world and rise up from it. He’s heading in the right direction.