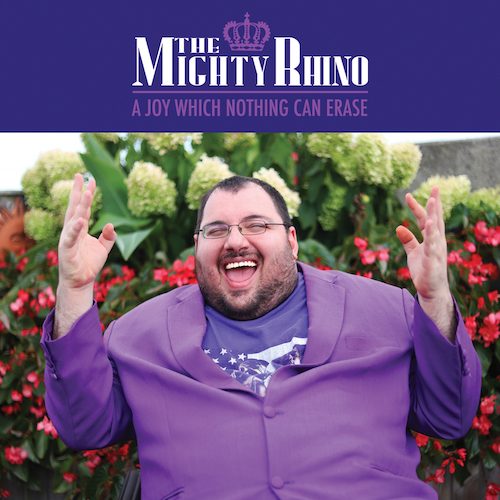 A Joy Which Nothing Can Erase

The Mighty Rhino :: A Joy Which Nothing Can Erase

“I’m the living manifestation of wonderment
Proof that true glory from heaven, really does exist
My certitude is a gift from above
So are my endlessly self-replenishing wisdom and love”

You might be forgiven for thinking The Mighty Rhino was a gospel rapper with an introduction like that, particularly given the title of his latest album is “A Joy Which Nothing Can Erase” and he certainly LOOKS like a Southern revivalist minister exulting joy to the Lord on the cover. “Full Steam” quickly dispels such notions as he quips “I’m not the typical Canadian” and yells “YEAH MOTHERFUCKER” to emphasize it. Polite? Not quite. In fact Rhino describes himself as “a cross of Raekwon and Danzig”. Now those would be some nasty motherfucking guillotine swords.

Rhino is whimsically self-deprecating in manner, wryly noting on one track that “I’ll probably never get a million views on the inter-Tubes, but I’ll style on all these rap gang nincompoops”. It’s a good defense measure against the harsh music scene he’s trying to push his way into album after album, but so are unapologetic attacks like “Tell ‘Em How You Feel About It.” He’s mad at genocide, racism, Islamophobia and radical Islam, Palestinian genocide, xenophobia of all kinds, and not about to pull his punches or feelings.

And although Rhino could easily be out shined by guest stars like Fatlip and Ultra Magnus, he brags that he’s “Pimp C with a Ph.D” with quotes that are “lines of cokes, you can freebase me” on “Aw Hell You Muthafuckin’ Right” and sets a tone for his guests that says NOW TOP THAT.

The truth is as a (self-described) heavyset Jewish white boy from Toronto, The Mighty Rhino was probably always fighting an uphill battle for any rap recognition beyond regional. There’s no point not mentioning it because Rhino would tell you if you didn’t ask anyway. That’s what drew me to compare him favorably to Marshall Mathers on my introduction to his work. He knows he’s the outsider who wants to break into a world that’s not going to welcome him with open arms, and instead of pretending the deck isn’t stacked he’s drawing cards from it and doubling down on his bluff. I hope he’ll forgive me for this one but it’s that chutzpah which makes him a compelling lyricist. He doesn’t simply rap on the mic — he attacks it.

To be fair he does at times lean on similes a little too heavily. As fun as it is to hear him say “I’m like B-Real negotiating a Middle East peace deal”, he could reign it in when he drops those type of bars in almost every track on “A Joy Which Nothing Can Erase“. It doesn’t make for a bad album, but it does on occasion make the format repetitive. Thankfully a solid production throughout and cameos that are limited in number but high in quality (Prince Po, Adam Bomb, et cetera) plus Rhino’s obvious skill as a writer and spitter make up for those minor flaws. The only negative as such I can offer about The Mighty Rhino is that he’s fully embraced the “underground ’til I die, independent as all fuck” role and in a world where album sales are dwindling that’s not a lucrative choice to make. It’s a respectable choice in but it means Rhino won’t ever quit his day job.

The Mighty Rhino :: A Joy Which Nothing Can Erase
7.5Overall Score
Music7.5
Lyrics7.5