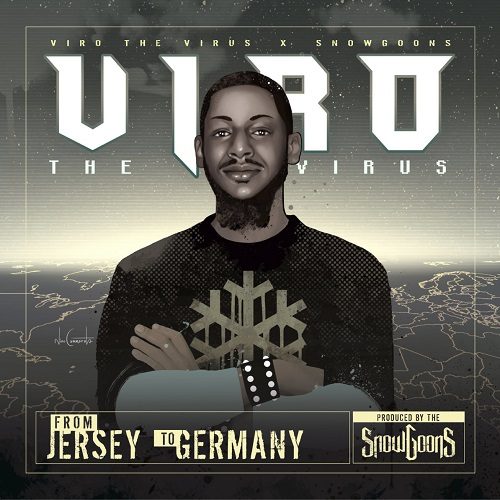 Viro the Virus :: From Jersey to Germany

At the earlier stages of the global pandemic that has 2020 in its grip, I contemplated a lightheartedly educational post with songs that might provide a bit of a soundtrack to us hopefully observing, if possible, all the necessary measures to contain SARS-CoV-2. Hand hygiene, social distancing, face masks, working from home, etc.

There already existed countless masked rappers before this outbreak, and one of them surely would have made the cut. As would have songs like Skepta’s “Shutdown”, Jeru the Damaja’s “Come Clean”, Fifth Harmony feat. Ty Dolla $ign’s “Work From Home”, MC Hammer’s “U Can’t Touch This”, Brotha Lynch Hung’s “Season of Da Siccness”, or KRS-One & Buckshot feat. Rock’s “Clean Up Crew”.

Doing a bit of investigation, I also came across acts who in the past happened to have chosen names that turned out to be relevant to the current situation, for instance Florida duo Epidemic or Manchester’s Virus Syndicate, and I readily remembered an MC I didn’t have to learn about through research, Viro the Virus. But when the reports from hotspots such as Northern Italy and New York made the severity of the situation clear, how the novel coronavirus ravaged patients’ respiratory systems, how health facilities even in wealthy countries were continuously short on protective gear and people began to die by the thousands, I dropped the idea of publishing a playlist that would have also included Fabolous’ “Breathe” (a song that would become subject to another tragic connotation through George Floyd’s death), because if there’s anything that is precisely no laughing matter, it’s COVID-19.

Still when art and life do collide, why let the opportunity pass by, especially when it entails shining a spotlight on an overlooked MC? And so corona gives us the occasion to delve into the music of a rapper who sadly cannot comment on the current situation because he passed away in 2012. The exact circumstances of his death are unknown but it is presumed that he took his own life. Information on Viro’s career in general isn’t readily available. For once, it seems, the Free Encyclopedia is able to provide the most complete discography. Which would mean Viro the Virus made his first foray into the indie rap market in 2002 with “Future Trauma”.

He then hooked up with Caliph-NOW for two EPs, whom he would continue to entrust with production to some degree throughout the following three albums, 2005’s “OutBreak”, 2006’s “Jersey’s Finest” and 2008’s “The Sharpest Blade”. Both men are originally from New Jersey but eventually worked from out of Philadelphia, so you will frequently notice a Philly connection in Viro’s music. His heart, however, would remain in NJ. Few rappers repped Jersey as a whole as fervently as Viro. The self-proclaimed “Garden State great” was eager to “show Jersey’s good for more than just Sopranos and tomatoes”.

While Caliph-NOW himself has extensively remixed the material they recorded together, “From Jersey to Germany” is a musical memorial organized by Viro’s international connect, Germany-based production team Snowgoons. He was among the crop of American underground rap artists they enlisted for their transatlantic rhyme fests, which also yielded his most well known song from 2008, “Starlight”:

“I light up the jar under the light of the stars
And write a few bars until the silence dissolves
Contemplatin’ if I’m right or I’m wrong
For dedicatin’ most my time to holdin’ mics in my palm
My dream has been lifelong
And though the finish line is still out of sight within my plight I fight on
And I ain’t singin’ no sob stories or sad songs
I stick to tellin’ the total truth, and that’s all
It’s ironic when you’re rap’s best thing
And yet somehow your career is still fledgling
That’s my predicament, and it’s perplexing
But instead of sweatin’ it I just keep progressing
While waitin’ for the stars to align
In a moment in time when it’s my moment to shine
But until then I keep my eyes on the prize
And try to survive night after night goin’ for mine”

Not only is “Starlight” one of the best songs in the massive Snowgoons catalog, it’s a highly representative statement that sheds light on the modern MC’s dilemma that the skills don’t necessarily pay the bills anymore. Which is a recurring theme in Viro the Virus’ music, his approach spanning the spectrum from insecurity to a sense of superiorty.

A number of songs find Viro perplexed by how much work is needed when there’s that much talent. On “Dizzy Dreams” he’s “slavin’ overtime to make this dream come true” and still essentially simply “manifestin’ the predestined”. Knowing fully well that those skills are not always the most direct way to a fan’s heart, he’s looking for an angle “to lessen your love for these thespian thugs, pretentious panderers and amateurs, nursery rhyme handlers”.

Viro’s lyrical content essentially spans the entire palette of indie rap discontent. Self-depreciation and sarcasm, but also bitterness and realism. For the latter, check the surprisingly matter-of-fact “$12.50”. If you prefer the underestimated underdog undertone, “Slumdog” will do the trick with punches like “These internet bloggers think they’re top-shot hip-hoppers / till I knock ’em out like one-armed boxers” and “I use death blows to cripple foes / They gotta get on they tippy-toes to hit me low”.

Despite his grievances, Viro always keeps his composure. His judgemental side finds expression in a generally skeptical stance. But he always chooses his words – well, wisely would perhaps be the wrong word, but the operative term is ‘choosing words’ anyway. He’s more Method Man than Ghostface Killah, putting words together Scrabble-style instead of just letting the pen flow freely. The type of writer who comes up with the metaphor “Outwork these dumbbells with brain power”.

But comparisons often only go so far. On paper, Viro the Virus and the likeminded Reef the Lost Cauze could be a “Dream Team”, but their 2006 collaboration of the same name falls short. And if “Passion of the V” could be a Ras Kass motif, it’s too conversational to truly evoke either passion or Ras Kass. Other not-quite-there comparisons include Apathy for “Almost Famous”, Masta Ace for “Growing Pains” and Royce for “Beastiality”. But he also strikes the right note when he recalls the committed stances of Rhymefest or Akrobatik with, for example, the brilliant “The Limit”, a rap interpretation of Feist’s sentiment from “The Limit to Your Love”, a showcase for how Viro mastered traditional rap tropes, in this case fake friends:

“Can leave you assed-out to a large extent
when niggas got two faces like Harvey Dent
Don’t be rollin’ with the phoney sort
Think he your homie ’til he hoppin’ out the Trojan horse
[…]
I limit expectations
Knowin’ that many men fall victim to last temptations
Even the most promising relation
can still evolve to a hostile separation
I stay in constant prepration
so the day of betrayal’s no shocking revelation
Cause truly you really get no benefit
from a friendship with a Brutus, Judas or Benedict”

Viro’s discography’s certainly got jokes and it’s got quotes. His efforts are curbed by the position he chooses for himself. He’s the kind of rapper who comes across like he never even fucked with anything else besides (stunts, blunts and) hip-hop. He seemed to become consumed by the entitlement mentality and savior complex of supposedly superior MC’s, as the lyrically dense debut “Future Trauma” was less concerned with those issues. If you judge Viro the Virus by this 2019 song selection (covering the years 2003 to 2009 – the news of his death came in 2012 after a three-year period of abscence), the songwriting isn’t as varied as it could be, “Who Are You” being one of the few examples indicating he had more to offer. The n word is rarely discussed in song form, and across two calculatedly stereotypical characters V still manages to teach a worthwhile lesson. He also composed an entrance theme for wrestler Chris Hero, his affinity for the sport represented here by “Rear Naked Choke”. Other times the chance to take a step away from the routine isn’t embranced. Like most of his colleagues, he isn’t immune to making promises that aren’t that easy to live up to, see 2004’s “Cause what the V say is deeper than these days’ clichés”.

Ultimately “From Jersey to Germany” confirms Viro the Virus’ presumed status as a truly overlooked mic technician outside of the familiar indie darlings. A “honor student in the rap game” who understood the rhetoric power and possibilities of the artform: “On the mic I’m always right / So my life is glory days and party nights”.

The Snowgoons as usual try to get the job done by sheer force and sheer numbers. In typical fashion, they hoard the production credits, remixing 16 tracks. Some get the regular Snowgoons makeover, sometimes clearly to the song’s deteriment (“Passion of the V”, “Who Are You”, “Desperate”, “Beastiality”), while others can compete with the originals (“Dance of the Damned”, “Almost Famous”) or surpass them (“Authentic”, “Growing Pains”). In the end these should be minor concerns considering everything the Snowgoons have done for Viro. When their relationship started, they offered him a greater stage and he paid them back with a beautiful and meaningful song for the ages. And after his death, along with Caliph-NOW, they made sure he wasn’t forgotten.