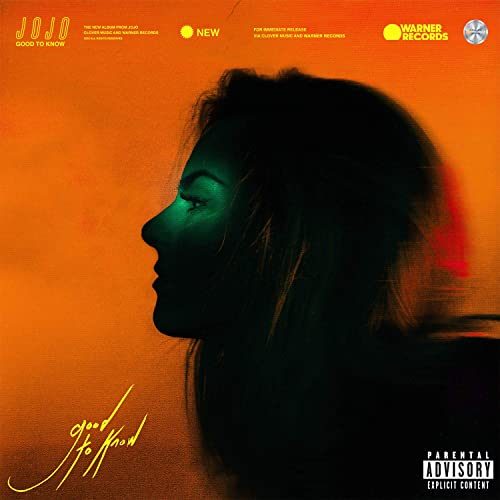 Joanna Noelle Levesque is described as everything from “soul” to “pop” to “hip-hop” on Wikipedia. It’s far from an authoritative source, but it’s a good place to start since I was unintentionally confusing her with JoJo Pellegrino. I believed he had just dropped the last name for whatever reason, so when I saw JoJo’s “Good to Know” on a list of “new rap albums” I didn’t hesitate to check it out. It’s fair to say what I heard caught me by surprise.

You’d have a good reason to ask “Flash, why didn’t you just abandon the review at that point?” Well let’s go back to that Wikipedia entry for a moment, authoritative or not, since it described JoJo as being in the “hip-hop” genre. There are at least a few cases on this album where that isn’t even a debate. “Comeback” features 30 Roc and Tory Lanez, and it’s produced by JoJo x 30 Roc alongside DatBoiSqueeze. While Tory is closer to being a rapper than JoJo, he’s also closer to being a singer than a rapper, so the lines are blurred to the point of being indistinguishable. They are equally crass about their sexual desires but I think JoJo takes the trophy. “So fucking good boy it’s disgusting/tell me it’s mine or I’m gonna lose my fucking mind/I need that dick all the time.” Well then.

It’s interesting to consider that JoJo was once the youngest artist (at age 13) to top the Billboard Pop Charts. She’s 29 now and the girl has definitely grown up. The Doc McKinney, Dylan Wiggins and Bishouty produced “So Bad” is more evidence of that. “Do it, do it, do it/and can we do it again/Does she know that you like it in the morning?/Know you, cum without warning/Know you, smile when you’re performing?” HOLY SHIT JOJO. It’s like the R&B version of Run The Jewels x Akinyele where Ms. Lesveque is happy to be the side chick who fucks a man better than his regular partner. “You’re just my late night friend undercover.”

JoJo definitely has the swagger of a rapper, but should we call her “hip-hop” just because of that? Just having those words in your Wikipedia bio isn’t enough, nor is the fact “Good to Know” is on a list of rap albums, nor because she is unapologetically frank about drinking and fucking to the point she needs some “Pedialyte” to recover afterward. It reminds me of a friend in Las Vegas who while high and drunk loudly proclaimed to all of us that he needed some ELECTROLYTES so he could keep going.

I’m not going to say that AutoTune emcees haven’t caused some of the distinctions between R&B and rap music to become fuzzy, but JoJo is definitely not RAPPING. In fact despite her clear desire to be a bawdy raunchy “parental advisory” warning sexual dynamo, she still sings some very traditional pop music style ballads like “Small Things.” The song has too many producers to list them all, but any one of them would tell you they were trying to make a song Justin Bieber or Miley Cyrus could croon to — and that result is almost flawlessly achieved.

JoJo may drop more than her fair share of F combs on “Good to Know” but she’s an edit or two away from being sold at Walmart right next to Blake Shelton. “Hip-Hop” can refer to a lot of different things — breakdancing, turntablism, beatboxing, rapping and visual arts (graffiti) just to name a few, but “hip-hop music” must be focused on an emcee, deejay, producer or any combination of those three. She’s not an emcee or a deejay, though she does at least co-produce a majority of the songs here, so bonus points for that. Let me sum it up like this — JoJo is not Pellegrino, but as a crass adult R&B singer there’s definitely a niche for her, and she can clearly crossover into hip-hop with the right cameos and co-producers. It’s not her genre per se but she wouldn’t be unwelcome in a cameo on any rapper’s album.