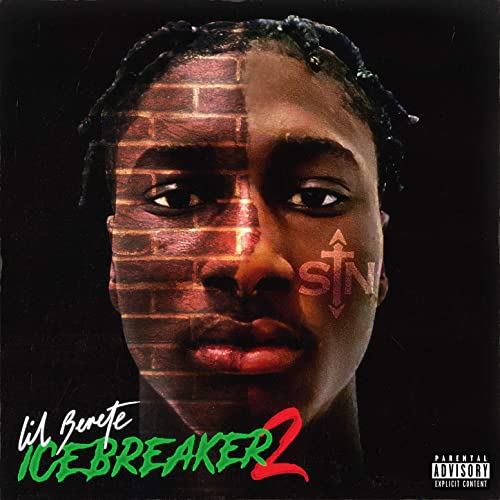 It shouldn’t stun me how homogeneous the North American rap scene has become, but here we are talking about Toronto rapper Lil Berete’s new album “Icebreaker 2” anyway. I have to point out he’s from the 6 in the opening paragraph because there’s absolutely no identifiable trait that signifies that’s where he’s from. You can find interviews with him that talk about growing up in the Regent Park neighborhood, but nothing about singles like “No Distractions” provide any evidence of the same.

“I been focused on this money, no distractions
My ride or die make sure all my close ones have it
Got some peoples tryin to do me in the past tense
And they ain’t really shoot a movie, they just actin”

Cool. I’m glad Lil Berete is looking out for his family. I think he’d be looking out for them even more if he created a distinctive sound musically, but the familiar warbling of pitch corrected singing isn’t that. He talks about all the people he’s seen die, all the killers that he rolls with, and he keeps “smokin blunts ’til the pain-all-go,” but what’s new about that? Even the short length of his tracks is par for the course these days for the rappers he sounds like.

I kept looking for something that’s not there to set Lil Berete apart from the rest. I’m not expecting him to throw on a Canadian tuxedo and start rapping about Molson beer and being true double blue, but where’s Berete’s identity on a song like “Scars?” Scars are DISTINCTIVE. If you’ve got them they are a distinguishing trait that sets you apart from other people. I know where all of mine are and what they look like. Lil Berete doesn’t seem “scarred” visually or emotionally. He’s too busy succeeding at sounding like a generic American rapper to have any scars — they’ve all been well covered up.

Lil Berete doesn’t even have any obsessions that work their way into his songs to help him stand out. There’s no comic book shit, no video game characters, no classic gangster movie references, not even SAMPLES of any of these things. I kept begging for Lil Berete to have just one defining quality to make him stand out, but he’s out here making money while other people are “Trippin'” about how well he’s living. That’s not going to cut it. That is literally the EXACT SAME THING every pitch corrected rapper in hip-hop is singing about.

I don’t enjoy being saltier than a bag of Aldi’s potato chips when reviewing an artist, even though I’ve been told many times over the years that people appreciate it when I’m honest and don’t sugar coat shit. This time it’s easy though because C&H doesn’t have enough sugar in all of Hawaii to sweeten my feelings about Lil Berete. I’m disappointed that someone could get this far in the music industry, have his own imprint (Southside to Northside), and have NOTHING TO SAY and NOTHING ORIGINAL about how he says it. “Icebreaker 2” is only for his fans, but they aren’t fans in Toronto — they’re fans of the sound he’s cloned from everyone South of the border.