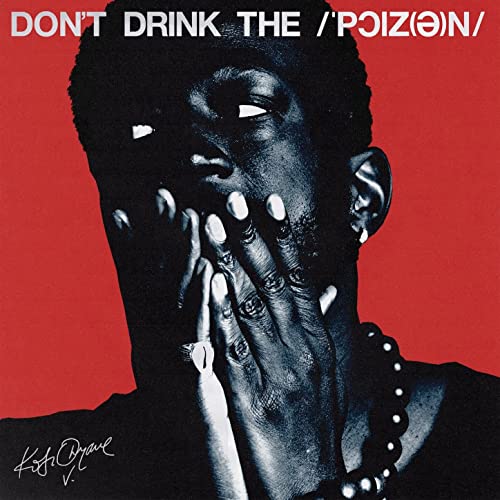 “Don’t Drink the Poison” is the fifth studio album by Glasgow rap artist Kobi Onyame, and my first encounter with his work. The album appears to be self-released, and Kobi produced most of the tracks on it, with some help from Jayso and Nathan Somevi. Kobi’s music mixes Pan-African influences (there are artists from Ghana, South Africa, and Malawi on the album) as well as hip-hop and electronica. The result is an album that is musically fresh and interesting, if not always lyrically so.

The highlight of the album for me was the percussion and beats. Kobi brings in different African percussive instruments and elements, and the album feels different from most other hip-hop out there. A song like “Aseda” has a swing to it that you don’t hear from contemporary American hip-hop. Banger “My Prayer” uses hand drums and hand claps to create a beat that you can’t help but nod along to. He also brings in the aforementioned musicians and singers from Ghana, Malawi, and South Africa to bring a nice musical flavor to the songs. The album often feels like a celebration, and there is a joyfulness to the music that I appreciated.

Unfortunately Kobi’s flow didn’t hit me in the same way. He is an earnest rapper who sings many of his raps and sounds like a man who wants to spread positivity. I appreciated that, but both his rhymes and delivery often felt to me like they lacked finesse. That could just be a taste thing and your mileage may vary, but for me there was a disconnect between the proficiency and skillfulness in the beats and Kobi’s delivery.

In researching this album, I came across this Medium post from Kobi that explains what he means by the album title. I have to admit it had me scratching my head. I assumed he meant don’t drink the poison of hatred, greed, materialism, consumerism, etc. Instead, he is warning us against the poison of… being progressive and inclusive?

Maybe I’m misreading this, but it doesn’t sound like a message I’m down with, and helps explain why I was underwhelmed with the album’s lyrics.  “Don’t Drink the Poison” is worth a spin if the idea of Pan-African hip-hop appeals to you.  Album openers “Aseda” and “My Prayer” definitely got my head nodding, but this record isn’t going into my heavy rotation.