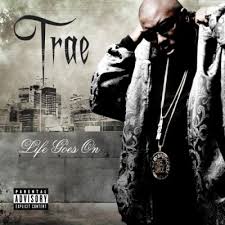 Rap-A-Lot Records can be your favorite and most hated label all at the same time. J. Prince has the annoying habit of doing his promotion in cycles. Either you luck out and Rap-A-Lot is pushing your single, sending out promos, and shooting videos or your album drops during the “no promotion” phase and even hardcore fans are caught off guard. Rap-A-Lot is currently in that “no promotion” phase as Trae’s latest album has come with no fanfare, even in his homestate. The frustrating thing is that Rap-A-Lot can promote an album properly and push a national hit when the label puts forth the effort. Trae has nationwide potential as three different writers on this site have all agreed that the man is dope on the mic. Even more frustrating is the fact that this time around Trae got features from Yung Joc, Jody Breeze, Gorilla Zoe, Rich Boy, Lloyd, Lil’ Wayne, Slim Thug, 2Pac, and even Jadakiss and Styles P. If any Trae album was poised for national success, it was “Life Goes On.” Instead we get another dope album from Trae which will probably be only peeped by hardcore fans.

On “Restless” one of the standout tracks ended up being the Yung Joc assisted “In The Hood” as it showed Trae could thrive on more than mellow and dark beats. To some the beat might have been too club oriented for the street savvy Trae, but the man had to get radio play one way or another. On “Life Goes On” Trae cooks up more than a few tracks that are clearly tailored for the radio. Yung Joc is back and brings his protege Gorilla Zoe with him on “Throwaways.” As dark synths crawl all over the track, Joc, Zoe, and Trae trade street boasts. The track is your typical southern track, complete with the slightly screwed hook stuck on repeat. As a long time fan it’s hard to call anything Trae does average, but this track, along with other radio tailored songs, do tend to fall in that category. Ex-Joc producer Nitty provides the beat on “C Me Ride” and lacks any of the magic that made him a household name two years ago. Trae doesn’t help the cause as he runs through the typical boasts about money, cars, clothes, and hoes. Things get better on the Lil’ Wayne assisted ” Screwed Up” as both rappers proclaim “you ain’t shit if you ain’t ever been screwed up.” Cylinders start clicking correctly when Slim Thug drops by for “Nuthin’ 2 A Boss” as the Houston vets drop street game over a hypnotizing synth combination. Despite the small stumble on some of the tracks, Trae does provide some dope radio ready material. Being compared to 2Pac before, it’s only appropriate we get both men on the same track on “Against All Odds.” Pac’s verse is obviously borrowed from a previous song, in this case “Deadly Combination,” but the collaboration is still a highlight of the album. Long time Trae producer Q-Stone drops a soulful, fast paced track that reminds me of Pac from his “2Pacalypse” or “Strictly For My N.I.G.G.A.Z.” days. Trae goes with his fast paced flow and drops paranoid raps that would make Pac proud:

“Tell em if they looking for me
Ain’t nothing changed still posted up with a couple thugs
With a couple straps in my lap holding a couple slugs
I’m in a Chevrolet floating on a couple dubs
Run up I’m put em in your chest like it’s nothing but love
I’m the game but still I feel like I’m against the law
I’m in my zone I lace em up and take em to the wall
I’s one of a G and I’ma be that way until I fall
Shit I’m on will have you praying Jesus will answer your call
Let it be known that I’m against all odds
I prophesize through the hood and underneath all gods
Bitch, I’m here to put the fire underneath all frauds
So any nigga in my way will be a motherfucker scarred
I’m the truth so recognize a living legend in your face
Before I catch an attitude and go to catch another case
I’m full speed for the ride, ain’t going to be another pace
And if you think it’s something weak then we can fall up out of place”

Another all-star collaboration that stands out is “Smile” with Jadakiss and Styles P. Over a soulful mixture of vocals, flutes, and synths Trae is up to his old tricks asking why he’s supposed to smile:

“I remember coming up, labeled a lil’ nigga
Watching niggas fuck over their own, but see I kept it realer
But being real ain’t always what niggas make it to be
I never thought we’d make it and then having niggas hating a G
I have enough shit to deal with on a day to day
Penitentiaries and life after death don’t seem to go away
Even though I never know the outcome something say to pray
And try to do my best to understand he right around the way
I got a call from Mr. Rogers just the other day
Telling me he by my side, I’m like what the fuck you talking bout
Til he told me Lorna died, it fucked me up so much I couldn’t even go to the wake
But if her family call I’m gonna make sure that their straight
It’s like this part of my life I live is damn near mastered
The more people I love the more they get took away faster
Sometimes I feel I talk to God a lil’ more than a pastor
Probably to live to make sure my son never become a bastard
I never been the one to quit, I always been a leader
But I feel this world is like a bitch and I know I don’t need her
If I knew it was this I never took the time to meet her
So I feel a frown across my face the only way to greet her
In the process of being Trae I missed out as a child
Probably because reality my style
And they told my cousin death before he thirty after taking his fire
He damn near twenty-eight so how the fuck am I supposed to smile?”

Trae even manages to get down for the ladies on “Ghetto Queen” where Lloyd drops a smooth hook and Rich Boy adds a verse.

It is nice to see Trae coming with a more balanced approach this time around, but thankfully he remains true to the style that made him famous. “Life Goes On” finds Trae reflecting on those people who have betrayed him and left him through out his life. At times Trae can be too dark, but on this track he lets us know that “Life Goes On” even after so many problems. “Give My Last Breath” is easily the album’s most heartfelt song as Trae dedicates the song to H.A.W.K. who was murdered around the time “Restless” came out. Sadly “Life Goes On” also comes at a time of mourning for the Screwed Up Click as Big Moe passed away in October. With death surrounding him, it’s no surprise Trae pushes the “Life Goes On” theme hard. The album’s last two tracks also exhibit Trae’s street/introspective side. “I’m Good” features Boyz In The Hood’s Jody Breeze and Trae as they reiterate the fact that they’re “good” despite all the drama surrounding them. The album ends with “The Truth” where Trae raps with no hook and details everything he’s been through, from his little brother getting locked up to his cousin meeting the same fate.

“Life Goes On” is clearly Trae’s most balanced album. On his previous efforts Trae stuck strictly to the streets and catered to his southern fans. This time around he delves into the commercial realm a bit more and tries to hit a wider fan base with the features. The balanced approach is definitely welcome but doesn’t lead to Trae’s best album. “Life Goes On” is a great album, but out of the 14 tracks, a few end up sounding like typical southern tracks focused too much on balling or keeping it real. I’d much rather hear Trae tackling those cliched topics than any other rapper, but even with Trae on the mic the tracks end up being average. With more time in the spotlight Trae will surely learn to go commercial without watering down, but even with a few average tracks “Life Goes On” is still a worthy purchase for fans of rap, southern or otherwise.