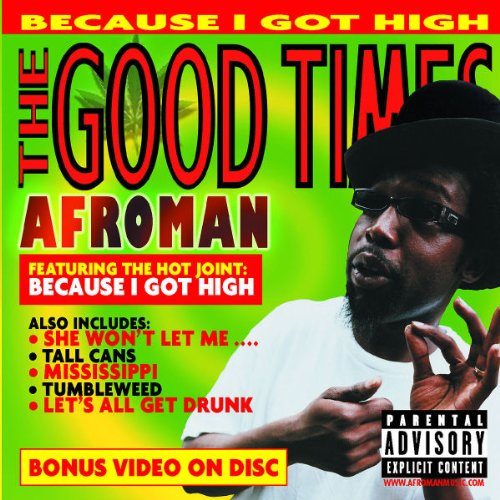 If you’re looking for a serious rap album that addresses important socio-political issues, the continuing struggle for hip-hop respect in the mainstream, and crisis within the inner city – you’re reading the wrong review. Try Chuck D, or Dead Prez, or The Coup – down the hall and to your left.

There’s nothing wrong with music that makes you think, but by the same token there’s nothing wrong with music that’s just for fun – and in Afroman’s world it’s all about “The Good Times.” Then again, if you believe his anthemic song “Because I Got High” it may be that weed is the worst way to have yourself a good time. In this ode to lethargy he goes from minor offenses such as not cleaning up his pad all the way to getting busted for not paying his child support, being shot by the cops, and living homeless on the street. Unintentionally this might be the BEST PSA against marijuana ever recorded – the DEA should take note.

This ten song album may be the silliest thing hip-hop has seen since Sir Mix-A-Lot busted out the “Buttermilk Biscuits” or Weird Al parodied Coolio on “Amish Paradise.” Half-singing, half-rapping, and not a whit of it serious, Afroman is the perfect comic relief for the harder than hardcore hip-hop scene of 2001. Afroman won’t win awards for lyrical brilliance, but his flow and storytelling on “Crazy Rap” recall the halcyon old school days of songs like LL Cool J’s “My Rhyme Ain’t Done”:

“See I met this woman, from Ha-WAII
Stuck it in her ass, and she said AIIIEE!
Lips was breakfast, pussy was lunch
Then her titties busted open with Hawaiian Punch
Met Colonel Sanders’ wife, in the state of Kentucky
She said – I’d fry some chicken if you’d just fuck me
I came in her mouth; it was a crisis
I gave her my secret blend of herbs’n’spices”

Produced entirely by Afroman with help from unknowns such as the Savalas Brothers and Dolowite, the album’s tone remains consistantly loopy – making even the gospel influenced “Hush” sound like comedic parody. It’s a good thing the album is only ten songs long in this case, because as amusing as Afroman’s shtick is it starts to wear thin after a whole album of his chicken calls, simple rapping, and BizMarkie style warbling. Still, this album will do well on the college music circuit, as well as with anybody who needs a break from hardcore “n*ggaz and triggers” rap music. Highlights include the frat boy anthem “Let’s All Get Drunk”, the narrative tale “Palmdale” and the anthemic ode to his home state (and a BIG-ASS river) on “Mississippi.” He may turn out to be a one-hit wonder, but Afroman will make you laugh while he’s got his shot!