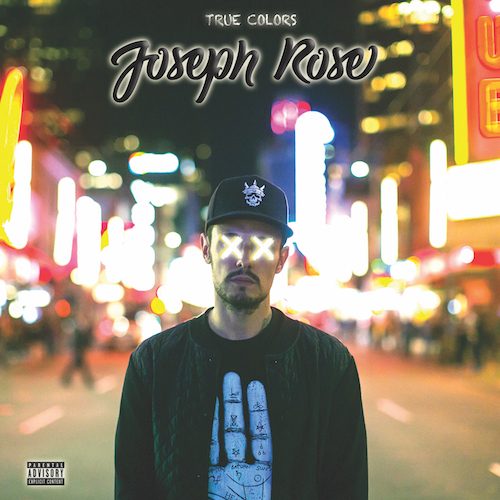 “From the Pacific side of the planet
Kind of parallel with Russia, yeah way up North…
It’s nice to finally meet you though
I got a bunch of aliases but you can just call me Joe
I live in Van City; my hometown is somewhere
that I’m guessin you definitely don’t know
Why does that matter though?”

Joseph Rose (a/k/a Joe Ro) is a Battle Axe Warrior affiliated emcee who appeared on Madchild’s “The Little Things” among other tracks. On “Become What You Are,” the opening track of Joseph Rose’s “True Colors,” sets out to advocate for hip-hop that’s color blind, ignores geography, and sets a common bond in the elements of the art and culture. Maybe 20 years ago as a college student I could have seen things as being that easy. That’s not to say Joseph Rose is naive or ignorant – rather it’s to say you can’t just end racism simply by declaring you don’t believe in it. Anyway let’s move on and give “Joe Ro” the benefit of the doubt on other tracks like “Know Which Way to Go.”

And using those Battle Axe connections to the fullest, Joe Ro gets Pro Logic (OVO) to produce and Rob the Viking to record his single “Pour You Out.” Connections also gave him enough of a budget to film a video and put it out to support his short 31 minute album, which officially drops next Tuesday (August 23rd). Check it out:

If I learned anything from his previous appearance on “The Little Things” it’s that Joe Ro is a self-declared ex-addict who wants to spend the time he used to chasing paper in that life to MAKE paper and take care of his family a couple of generations beyond his own. Hints of his past still pop up on songs like “Only Way Is Up” though when he talks about bagging up the work and says, “Hopefully I get out before I go to the pen.” He also sounds the despair of that lifestyle, talking about his feelings of suicidal depression, and even if the flow isn’t a revalation musically his honesty is lyrically.

That’s what makes it hard to have a “meh” reaction to a rapper like Joe Ro. It’s like he enrolled in Hip-Hop University and got a passing grade in every class, graduated with a degree in how to emcee, and immediately went to work punching the clock. I sense all of the commitment and dedication and how bad he wants it, but I’m not getting excited listening to it. The production is good, but it doesn’t blow me away. The raps are solid, but they’re nothing I will remember or quote after this review. It’s not that I don’t think Joe Ro can’t get there in time – I doubt Madchild would roll with the dude if he didn’t see the talent – but Mad is overflowing with charisma and Joe’s cup does NOT runneth over. Maybe in time he’ll fill it up.