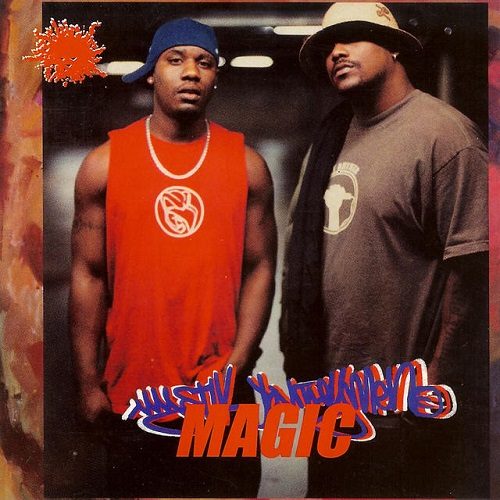 There is a moment when our bodies make the journey from deep sleep to being fully awake. This twilight time, which can last from a few seconds to more than an hour, is when we have the most memorable dreams. This is when we can dream about our sixth grade teacher, Mrs. Arlington, breakdancing to “Grindin'”, while Evel Knivel and Pamela Anderson beatbox in the background. It’s not necessarily a pretty sight, but it is a necessary purging of our unconscious thoughts and desires before we start the day. Mystik Journeymen, with their fucked-up album “Magic,” seem determined to purge their shit – and your shit – on wax. If you like exploring the forbidden realms of your mind and peeling off the wallpaper, you’ll take to it like a fish to acid.

The 72-minute CD sounds like a hallucinogen in THX, brimming with random vocal samples that hold you like a tailored straightjacket. “You don’t have the guts,” a Dracula-like voice starts to say. “Old man remember small things very big. Old Chinese proverb. Dinner finished,” an elderly Asian voice will suddenly say. What the fuck, you’ll probably say. Exactly.

Like my two favorite fuck-with-your-brain CDs, Smashing Pumpkins’ “Siamese Dream” and Radiohead’s “OK Computer,” “Magic,” will get you laughing, agitated and downright uncomfortable, only to get you open for some anything-goes music. Don’t get the metal comparisons twisted, though: this isn’t a rock CD. It’s some indie hip-hop shit.

The dynamic duo of Sunspot Jonz and PSC bring unusually complex beats and even more complex lyrics to the table, talking about everything from Industry Rule #480 (“Jambalaya”) to funky James Bond fantasies (“Setup”) with enough detail to — well, enough detail to tell that they’re doing some serious purging. They even bring Me’shell “If that’s your girlfriend, she wasn’t last night” N’Degeocello to play some tasty licks on “Jambalaya”.

One great cut is “Amnesia,” which gives a big, fat and funny middle finger to ex-girlfriends, abusive foster parents and fair-weather friends. A Stevie Wonder-caliber harmonica frames the tales, while a Tony Montana-esque voice repeats “Forget about that,” not unlike Ghostface’s “One.” They outline, with tongue firmly in cheek, about how a relationship went awry and what they think of “friends”:

“I see my future in the eyes of this Ms.
I describe in this scribe with a kiss
If I came any other way, my vibe compliments her
wishing how a man would approach
You know I had jokes
Chummin’ it up, like we was folks
Like I knew her since I was a little kid
High hopes, all his, got close
Leaned back for a lucky cackle
When I fell on the floor like I was tackled in the XFL
The fall help me sail into the heart
of something precious, where other guys had failed
Long due relationship, see I must take a trip
Guess where I’m headed after every Christmas?
Leave the land of Impalas to kangaroos and koalas (Australia)
Swallow all my pride to let the love grow inside
But she took me for a ride, it’s painful to write it out
I got to end this verse right here, before I curse her out (Biiaatch!)
Forget about that
[…]
The times I stood on the corner
sellin’ tapes, and people would see me and laugh
Fake handshakes and club hugs, no love
Cause when I was walking to the bus stop
You buzz by in your car like you don’t know where your brakes are
Forget about that”

The beats bounce and warble like green Jello in a centrifuge. Peep the Herbie-Hancock-playing-with-a-moog “Sweat,” featuring Grouch and Murs (“You’re not fuckin’ with me,” say the lyricists, “Like my ex-girlfriend”). The track zooms in and out with Freddie Hubbard horns, sucks and calls, and Spanish musings. Say what? Or the high-pitched sequels of “Moon Prayer,” that chops up a fast Dave Grusin-esque beat, kind of like Biggie’s “Everyday Struggle” on 45. Or 78.

It’s here on “Moon Prayer” where they go nuts, changing vocal tones mid-rhyme like Bobbie McFerrin. I recommend getting the CD — otherwise you’ll have to do a lot of fuckin’ rewinding to get all the references:

“I climbed down life’s line, bucket to rhyme, fuck it, I can do this
Times I saw love, times I saw haters who persist at times
To run you in the mud, showin’ no love, so we had a hard run
Shoved and pushed and whoosh! We doin’ it!
Sick how life works, but I felt like a jerk
That shit went on as I went on, tours went on
Long country excurse; John, who was at home was startin’, gone
Your girl feels neglected, then shit gets hectic
Though it’s all….
You fight over dumb shit with his dick in your back
And your heart is starting something always in
Always every beginning has an end
And knowing when, separation of love existed again
We’ve all been through this, tough choices of sin
Like when we blew the Bay up and had to go
Yo, you know it’s all love
It’s just progression
Yo, I want the world diggin’ this, two lyricists
as you hearin’ this and we nearin’ this, pump your fist
It’s all love for letting us come to your country or state
I love to watch you break
And rhyme, make hip-hop your life
Me and my wife gettin’ married at Tupac’s
Bonnie and Clyde, +Me and My Girlfriend+ Like these beats ride to the sunset
And get all you can get
High, I want the fuckin’ pie
Like Jason Biggs on the countertop of life”

The duo sail on the fragmented, creepy beats just fine, which makes one wonder if they would sound as good on average beats. It’s like their flows were made for the beat-induced nightmare zone inhabiting this CD.

There are a lot of original artists out there, but most of them sound bad. Then there are those who sound OK, but don’t sound authentic — as Jigga would say, “He’s alright, but he’s not real.” However, like Busta jumping around in your earphones or DMX yelling at ya ass, the Mystik Journeymen sound good because you can’t picture them sounding like anything else. Their sound is natural, like sleeping.