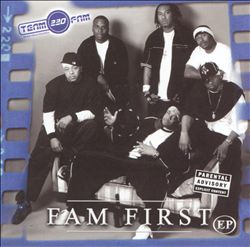 For some, the rap game and what it has to offer, it makes them bitter and cynical. Others don’t wait for it to give them something, they go out and take it. With all the money being made with rap music, you’d be stupid not to try it, right? And I am not talking about bootlegging the latest releases, I am talking about buying equipment, booking studio time, setting up that label, signing artists, getting behind the boards, stepping up to the mic. In short, getting shit done.

Which is exactly what the people from Team 220 are doing. Assembling rappers representing the states of Massachusetts, South Carolina and New York, the Boston-based label is virtually new to the game and introduces itself to the public with this 40 minute-long EP. On the performer side, we have a mixture of some more seasoned and some fresh talent. In the latest fashion, they get introduced by the token ‘hater’ (“Intro: Haters Skit”). Let’s see if that hate is undeserved or not.

“I got no time for you, hater, so ah, I holler later
Skatin’ with your chicken in a coupe, I’m pluckin’ her later
You wanna ah, test the Team and ah, we’ll leave you leanin’
have your whole crew regurgitatin’ just like bulimics
I got 220 tatoos, 220 gats, too
220 cats that won’t hesitate to clap you
We get it poppin’, panties be droppin’ and feds be watchin’
Get in the game and control it like John Stockton”

Add an excited female voice saying – among other things, such as “daddy, snap that bra” – “daddy, spit them bars,” and you start thinking yourself that this IS kinda hot. As far as getting club play, “Hot 16’s” is definitely a contender, just maybe not the strongest. Similarly, “Throw Your Cups Up”, a simple club-now-fuck-later tune could grant Team 220 access to the clubs. Personally, I’d have to go with “Mommy”, which not only features a more flavorful hook (sung by Tashawn King) but also lyrics that are actually worth following:

“She need an own car, an own crib, and money to spend
smoke weed, like to party and got plenty of friends
It ain’t about looks, she gotta have brains and more
cause I seen ’em change before, go from dames to whores
dimes to ducks, I understand times is rough
but that don’t justify your ways and all the guys your fucked
Promiscuous broads be quick to strip and give you the drawers
just as long as you got money and your dick get hard
Cause chickens be gased, thinkin’ if they kickin’ some ass
that you s’posed to butter ’em up and always hit ’em with cash
buy ’em a whip, supply and provide ’em with shit
but no matter how good you treat ’em, they be tryin’ to flip
Stressin’ you out, comin’ out the neck in they mouth
We not together, so tell me what’s the questions about
You all in my biz, how I’m s’posed to call you my whiz
when it’s some other nigga runnin’ round callin’ you his?”

With “Mommy”, rapper 360 establishes himself as the most prolific writer in Team 220. Too bad he hurries at double time through his second solo effort, “Do it For”, a bad imitation of a Timbaland or southern bounce track.

Other rappers in Team 220 are in need of a higher mileage before they start running as smoothly. All Killarochi has going for him so far is his attitude (“up in the game, up in your dame / I guarantee, dog, both of them things’ll change,” he warns in “Rated ‘K'”), other than that he has yet to distinguish himself from the thousands of his ilk. Also, Twin Ramada gets props for trying to master the difficult art of storytelling, but “After Midnight” fails to grab your attention despite the drama going down.

“Real My Niggaz” probably best sums up Team 220 as a clique. There’s definitely a team spirit that might help them establish themselves in this game. “Your whole album shoulda been instrumented / you got mad niggas in it, borrowed, bought and rented / yeah, they ripped that bitch but did you really represent it?” asks one of them rhetorically. Unfortunately, if a joint dedicated to your peeps is mostly about murdering other guys, it’s hard to see a positive message in it.

More than anything, the “Fam First” EP reflects the participants’ dreams to make it big in the rap game. Take everything they say for granted and you’d think they already have it made. As far as their collective rap career goes, a street buzz they might well be able to generate, but mainstream fame seems far away right now. With an in-house production that lacks that finishing professional touch, it’s most likely the local route for Team 220.