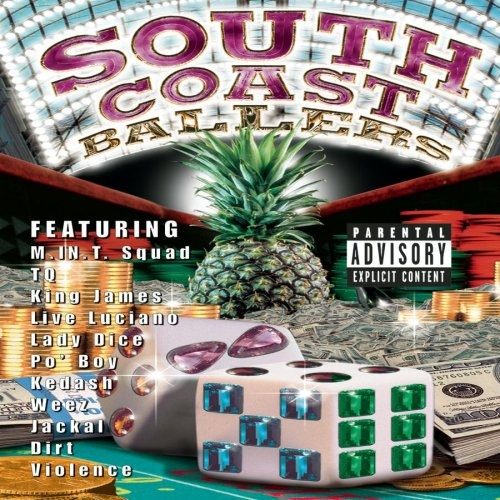 You may remember this crew from their association with the independent film hit Big Ballers and the accompanying soundtrack. I wouldn’t. I actually had to look through my old files and check to see that it was them. Yup. Still them, and still wack. (Ironically, I noticed that one of the few rappers I liked on that soundtrack was “Trick Daddy Dollars”, who has just blown up with an album entitled www.thug.com and the single “Nann Nigga”. Sometimes, you just get lucky like that.)

What tired gangster rapper couldn’t come up with lyrics like these, from the South Coast song “The Game Don’t Stop”?

The game don’t stop nigga why should I?/ Keep talking out your neck nigga, slugs’ll fly/ Keep pimping these pies and the squad’ll rise/ Put your squad on deck and your squad’ll die

Fabulous. Another group that thinks they’re the ultimate gangster rappers. Even Murder Dog magazine would have to recognize these bustaz for the mediocre imitation of talent they are. I can’t believe the dude actually said “bang like Bloods and Crips” – is he still living in 1986? That shit is old, and hip-hop has matured way beyond it. These guys make the South Coast look bad. If you’re going to talk gangster shit, you should at least bring something fresh to it lyrically. “Throw a tech in your mouth/toss a bomb in your house” doesn’t. They use a simplistic AABB rhyme schema and into it they pour in the most abused cliches of hardcore rap possible.

There are a few highlights. 80’s pop music gets remade with a twist on “For All My Hustlers” – and since the first cat on the song is singing instead of rapping, it actually comes off. Sounds a bit like TQ. When the rapper comes in, it gets dragged backwards again – but the groove still rides. “Give It To Em Raw” is reminiscent of Three Six Mafia’s better material; at least in terms of the beat and the Gangsta Boo impersonator up on the chorus. Some people may appreciate the G-Funk synth of “I Need a Thug” – it sounds radio friendly. Most of all, the update of “Bound 2 Happen” from the Big Ballers soundtrack is still riding on those Psycho-like piano keys and manic chorus — they even include an interesting “Old School Remix” to keep things fresh.

I think what this album ultimately proves is that even decent producers can’t make wack rappers sound good. There are a *few* slamming tracks on this LP musically, but that doesn’t save the LP from the bargain bin. If the different verstions of “Bound 2 Happen” were released as a single, they could put “For All My Hustlers” and “I Need a Thug” on the b-side and have a nice little joint for $5. Lyrics would still be wack though. It’s just not that many bitches, niggaz, thugs, and hustlers in rap to go around. At some point, the lower echelons have to be cut off if they can’t make something better. This group might be a hit in Miami if they’re lucky, but the odds they’ll go national have to be about 10,000 – 1.