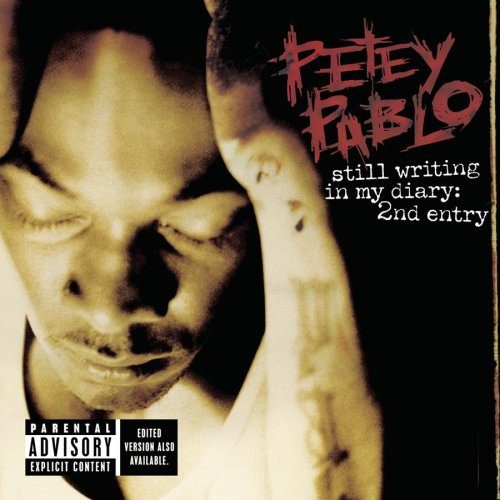 Having a hit single straight out the gate can be a gift and a curse. At its best, the single can serve as a stamp for the artist’s style (see Nelly’s “Country Grammar”) and get him some new fans, or at least make the artist a quick buck for the length of the song’s radio play. However, at other times, it can serve as a running joke as artists who never reached their full potential (i.e. Coolio’s award-winning “Gangsta’s Paradise”).

Petey Pablo seems determined to stop this trend. 2001’s rowdy Timbaland-blessed single “Raise Up” had clubgoers everywhere twirling their shirts, despite an underwhelming LP, “Diary of a Sinner: 1st Entry.” Petey’s not content with that though, coming out with his new album, “Still Writing in My Diary: 2nd Entry.” Right off the bat, Petey lets us know that it’s “time to take the shirts off again” with the album-opening “Part 2.”

With this track, it’s safe to assume that the majority of Petey’s diary writing still consists of party tracks. To his credit though, he does this exceptionally well. He employs King of Crunk Lil Jon’s producing talents on three tracks (“Jam Y’all,” “You Don’t Want Dat,” and the single “Freek-A-Leek”), while other highlights include the jazzy horns on “What You Know About It” and the bouncy self-produced “Let’s Roll.” With these offerings, the tarheel shows that when paired with rowdy beats, his raspy voice and Mystikal-esque energy can carry a track.

“Still Writing in My Diary” also features some collaborations to keep things interesting. He manages to actually show rhyming skills alongside G-Unit’s Young Buck for the street banger “Oh It’s On,” and teams up with Baby and TQ from Cash Money for the funky Mannie Fresh-produced “Did You Miss Me.” He also ignites old flames with Timbo, riding with Bubba Sparxxx on “Get On Dis Motorcycle” and trading verses with Missy Elliot on “Break Me Off.”

13 tracks into the album, Petey decides to turn the page of his diary to pen introspective lyrics. These songs occasionally hit the head of the nail, like the hater testimonial “Roll Off” and the Kanye West-blessed “I Swear,” an ode to his homies and his mother. However, tracks like “Be Country” and “He Spoke To Me” are less effective. He gets the point by the time the latter track ends though, ending the album with the club banging second single “Vibrate.”

While “Still Writing in My Diary” isn’t flawless, it’s a surprisingly solid album from an artist that most critics (this reviewer included) had probably written off after a less-than-stellar debut album. Though more introspective tracks would have been more fitting of the album’s title, Petey plays on his strengths by making his charismatic voice and catchy beats the bulk of the album. With his sophomore effort, Petey can find comfort in knowing that his diary entries can be appreciated by people other than himself.