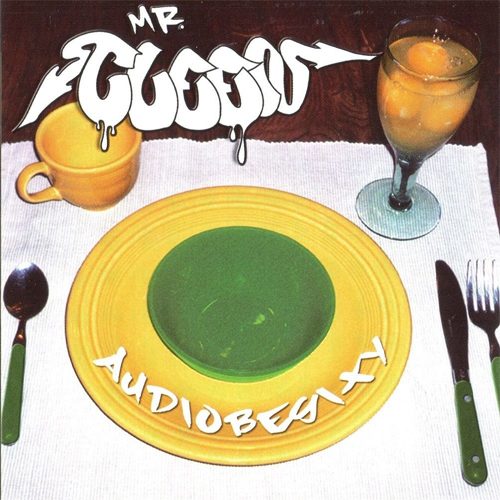 With a motto that states “we’re here because hip-hop is polluted” the Life for Better Times crew definitely has a strong opinion on the current state of hip-hop music. LFTB’s Mr. Cleen promotes this agenda on his solo release “Audiobesity.” The main argument presented by Mr. Cleen is that hip-hop has been polluted by commercialism. To remedy this problem “Audiobesity” criticizes the current state of hip-hop while allowing Mr. Cleen to express his own opinions on the world. The record does little to convert anyone to LFTB’s brand of underground hip-hop instead only providing fuel for those who already support such an opinion of commercial hip-hop.

The fact that Mr. Cleen is opinionated or alienates a large part of the hip-hop audience through his record isn’t a death sentence for him. His record is quite entertaining and definitely worth a listen for any hip-hop fan. The beats are your usual fare of underground music, with mostly mid-tempo rhythms backed by a vast array of samples. Among the standout tracks are “At Large,” a playful more up tempo track with a xylophone melody that is reminiscent of the Beatnuts’ production. A Twilight Zone sample is used well for “Fast Food For Thought” allowing Mr. Cleen the perfect music to go with his “conspiracy theory song.” Other tracks are consistent with a only few musical missteps, including the self-produced “Hey Dumb Girl” which doesn’t fit the overall feel of the album, “The Swan Lake by My House” sounds like a watered down version of Westside Connection’s “Bow Down,” and the minimalist drums and piano in “Teeter Totter” sound a bit unpolished.

As an emcee, Mr. Cleen holds his own throughout this 14 track effort, ranging from songs with messages to ill punch lines and semi-battle raps. “A Little Something About the Author” provides an apt intro for Mr. Cleen to sum up his opinions on hip-hop. “Liquified Images” is a dope song dealing with the current situation of the world and the crazy things that we hear on the news everyday. “True Blue” is Mr. Cleen’s ode to hip-hop that features a rather introspective look at the future through the eyes of a hip-hop head. “Pallbearers” is a crew cut that features most of the members of LFTB and shows off the various styles of the group.

Mr. Cleen is solid emcee, though he has his weaknesses here and there. While never the one to critique another for being too opinionated, this could be the one factor that would hold Mr. Cleen from reaching a larger audience. “Audiobesity” features criticisms of everything from P Diddy’s sampling, hip-hop’s obsession with guns and violence, to the sales of hip-hop albums at major retailers such as Best Buy and Wherehouse Music. There is definitely a large following of underground heads who would never find themselves pumping the newest Lil’ Jon track, and there are those who pump nothing but Lil’ Jon, but in between these extremes are hip-hop fans who appreciate both sides of the spectrum. It is these fans that fall in between that can make the difference in determining an artist’s success and by alienating these fans Mr. Cleen may be doing himself a disfavor.

The average hip-hop fan doesn’t want to listen to an emcee complain or talk about hip-hop for the majority of an album. I’m reminded of Dave Chappelle’s intro on Prince Paul’s “Politics of the Business”:

“Liked it, Shmiked it – it’s all backpacking music
You’re lucky to go double wood with that shit
Double bar of doo doo
Look Paul, this ain’t the fucking 90’s alright…”

I’m not saying Mr. Cleen is wack, but his effort is backpacking music for those who despise commercial hip-hop. Track after track it seems Mr. Cleen is preaching to the choir instead of reaching a broader audience. If that’s the point of “Audiobesity” then Mr. Cleen has definitely succeeded, but if he wanted to reach a larger audience and actually make a difference, especially among those that don’t share his views, then he has failed. In the end, those who dislike commercial hip-hop will love “Audiobesity,” but for those who can appreciate club and street music, no matter how ignorant it gets, the album will sound like a criticism of the diversity that has allowed hip-hop to spread from the streets to the rest of the world.