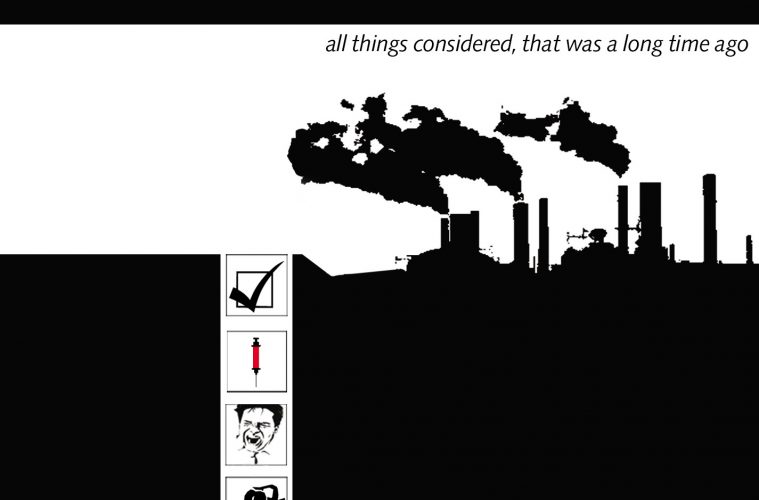 Dr. Monokrome :: All Things Considered, That Was a Long Time Ago

I think it is clear to even the most casual rap fans that we are now entering a new aeon, an epoch where the rapper is no longer the focal catalyst of rap music, where focus progressively inclines towards the producer. In an era dominated by the Neptunes, the Timbalands and the Dr Dres of the age, where producers can legitimately secure widespread critical appeal with exclusively instrumental endeavors (RJD2, Blockhead, Wale Oyejide et al), it is glaringly apparent that the growing creative powers of today’s production elite has thoroughly eclipsed the emcee, allowing a host of rappers to hide comfortably behind accomplished beats. This double EP by rising underground institution Backwoodz Studio exemplifies this, Dr Monokrome exhibiting a refined panache for dark, eerily involving soundscapes that overwhelm and belittle the bland contributions of the emcees on show. A double EP of material featuring separate collaborations between Monokrome and Priviledge/Mutually Assured Destruction, this effort is a bit of a mixed bag, featuring emcee performances that range from average to erratic to spectacularly underwhelming.

I have no idea what’s going on with Priviledge on the first EP, particularly since the press bio suggests that he’s the “heir apparent to the throne of Philly legends like Black Thought and Schoolly D.” Priviledge lacks the charisma and accomplished swagger of either emcee, employing a deadpan, metrically suspect and unenthused delivery that displays very little nuance or dynamic variation. One might assert that this robotic approach is adopted to complement the futuristic, progressive feel of Monokrome’s compositions, but the frustratingly flat and incomprehensibly detached rambling of Priviledge ultimately proves to be exhausting, particularly when juxtaposed with the engrossing, unerring brilliance of Monokrome’s compositions. “Live & Direct” morphs from atypical G-Funk into an apocalyptic swirl of white noise and sparse blip-hop, while “Lost Highway (In The Wind)” fuses spectral, whispering flutes and a muffled, plodding stuttered kick drum, an off-putting affair that exudes a captivatingly eerie feel.

Having stamped his name on a great collaborative effort with Vordul (“Camouflage”) in the past, Billy Woods fares quite a bit better with partner Thrill Gates on the second EP. Stunningly, Monokrome’s compositions here tend to be, well, rather monochromatic, lacking the hypnotizing depth of the first EP. Instead, the beats here are sparser, even more bare than those on the first installment. Many beats here feel too burdened, too constrained by Monokrome’s pursuit for simplistic sparseness, his efforts unable to offer an evocative piquancy to distract from the poor man’s RZA exploits of Thrill Gates. Thankfully, Woods infuses each track with significant character, his bassy baritone and forcefully confident, scattershot delivery and assertively insightful content coloring otherwise droning, taxing tracks with dimension.

There is plenty of interesting material on offer here, but bizarrely there is a stifling incompleteness to each and every offering on this recording that ultimately renders it an uneven affair. Bursts of brilliance from Monokrome are thoroughly depressed by unimpressive rapping, shades of genius from Billy Woods are complemented poorly by competent, but incongruous beats by Monokrome. Ultimately, this remains somewhat unimpressive.

Dr. Monokrome :: All Things Considered, That Was a Long Time Ago
6Overall Score
Music7
Lyrics5.5