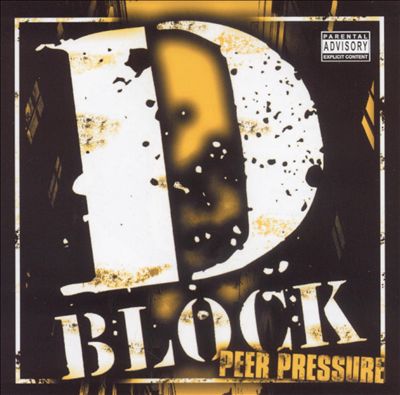 Continuing their recent stream of underground style mixtape albums which are professionally packaged and released to national retail, D-Block’s “Peer Pressure” is the first to focus to reference the entire clique membership instead of individual artists like Sheek Louch or Styles P. Styles’ “The Ghost in the Machine” or Sheek’s “Year of the Wolf,” were nice but who wouldn’t want more of the always popular Jadakiss or popular underground rapper J-Hood? I’ll warn you right now though not to put this album on random shuffle because if you do there are times you’ll have NO IDEA what the hell you are listening to. There are SIXshort tracks just named “Freestyle” – they couldn’t have come up with a little something to differentiate between them? Fuck it, I’ll use myOWN system. I’m calling this one “Sheek Louch Freestyle #2”:

“These pussy-ass niggaz all scared to death
While I watch, sit calm like Red & Meth
Clap off at a nigga, ’til it ain’t no breath
If I don’t hear shells droppin, it ain’t none left
I met a lot of real niggaz in time, I ain’t gon’ lie
It’s only a handful that I met that can rhyme
Everybody else in my cool
Big linky young boys in the game, like Kareem Abdul
Niggaz better stay calm, I’ma leave that jewel
Sheek worse than that bully, that you meet after school
And I don’t give a fuck what you think doggie”

I’d also like to issue a complaint about the liner notes in this album; orRATHER the lack thereof. The flipside of the insert in this gem case is simply the same tracklisting that’s on the back of the album. No production notes whatsoever, although by the numerous Mario samples I suspect Supa Mario and/or Poobs did all the work on the beats. Either way it’s disconcerting that the package looks so professional in the shrinkwrap until you open it, and then discover it’s about as ghetto as an early Rap-A-Lot Records release on the inside. That’s not necessarily a bad thing given that Rap-A-Lot survived and released a lot of dope music by being cheapskates, so D-Block Records can’t be faulted for the hustle. They can however be faulted for mediocre songs like the Team Arliss and T. Waters track “Before You Grow.” At first you’re thinking “hey this joint’s okay, that beat’s kinda like Alchemist or Kanye” but before long you realize it’s not as creative or interesting as either – the lackluster lyrics quickly making that evident:

“Niggaz nervous since we stepped on the scene
My weapons is dirty, my record is clean
It’s the verbs I’m speakin, these birds is creepin
I know that anything that come too easy, ain’t worth keepin
I know you gotta think first then talk
I know you gotta crawl first then walk
And I know that even though shit ain’t quite right
At the end of every dark tunnel there’s a bright light
Wan’ bubble, double the top salary
Y’all don’t know how to struggle, can’t handle prosperity
Streets wan’ marry me, been had pull
My glass was half-empty, now it’s half-full”

Judas, could a rapper spit more empty gangster cliches and tired overused analogies than that? It’s like someone fed his voice into the D-Block Rap Robot 2006 and hit the button marked “Generic Hardcore MC.” The vocal tone has no personality and the verbals are not impressive, and I really don’t care if this is Arliss or Waters – whoever it is should go back to the lab. Even when one of the former L.O.X. members does the same thing they at least have the strength of their charisma and personality to fall back on, something that’s not hard to see on the track I’m going to designate “Styles Freestyle #1”:

“S.P. don’t play that shit
Ask your boss to try me, you won’t okay that shit
Niggaz say it’s your girl I lay that bitch
Headcracks since we been layin on ADAT bitch
Lil’ nigga I been O.G.
I go broke in New York I got cash in a crib OT
And I’ma bring the pain like a toothache
Last thing I saw was his boot shake, I’m makin the roof break
I get up in your mouth like toothpaste
I’m dark like Batman, this big gun is makin you Two Face
Get it? Motherfucker”

D-Block’s “Peer Pressure” is a tale of two completely different albums forced to share the same inexpensively produced disc. On one of those albums you’ve got outstanding songs like the Styles P and Tre Williams duet “I-95” or the thumping Sheek Louch “Beautiful Day,” on the other you’ve got songs like Straw’s “Guns Up” that are only interesting for the Vinny Idol beat and Styles P guest appearance. J-Hood tries to bridge the gap between the two but he can’t do it for delf, and Jadakiss could have brought the overall quality up with more verses but for a so-called D-Block album he’s surprisingly almost non-existant on it save for “Gator Ent.” I’d like to tell you as a D-Block fan that this is a must own album, but you’d be better off buying “The Ghost in the Machine” or one of the other solo efforts instead, because this one is more often miss than hit.