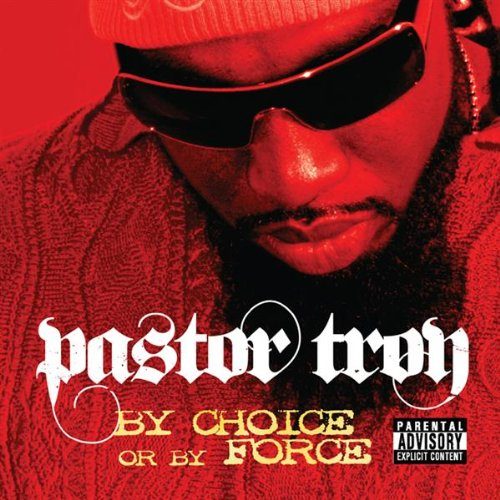 Pastor Troy :: By Choice or By Force

Pastor Troy has experienced both ups and downs in his lengthy rap career. Originally one of the first ATL crunk artists to make noise, Pastor Troy’s “We Ready â€“ I Declare War” is considered to be a classic by many a southern fan. Despite a strong independent following, Pastor Troy failed to make a nationwide impact. Later Troy secured a major label deal with Universal and was back on top once again. “Are We Cuttin'” was a hit and was featured on the XXX soundtrack. For the street fans Troy had “Vice Versa” in heavy rotation, one of the deepest tracks to come out in the new millennium. Yet after his national success Troy faded out of the spotlight again and only showed up for the occasional guest spot. His deal with Universal didn’t work out as the Pastor didn’t move enough units to please the media giant and since then it seems he’s bounced from label to label. In 2006 the Pastor is back with distribution from Koch and plenty to say about his experience in the industry.

Since the last time we heard from Pastor Troy it seems a lot of his relationships have soured. Absent from “By Choice or By Force” are members of Troy’s Down South Georgia Boyz, who were featured prominently on previous efforts. Pastor Troy also goes after his newest foes viciously on the album using “Murda Man 2” to diss Lil’ Jon and his BME click. Troy has never been the one to hold his tongue, but “Murda Man 2” doesn’t do much to explain his problem with BME or add anything new to the standard diss:

“Verse 2! I’ma ride on BME
Cause you pussy ass niggas can’t fuck with me
Fuck a BME, Y’all niggas ain’t BMF
I handle y’all bitches by my damn self
Fuck Lil’ Scrappy! Fuck Lil’ Jon!
Fuck Don P! And his son!
Fuck Big Sam! Fuck Lil’ Bo!
You know who it is, it’s PT hoe!
Fuck Crime Mob! Oobie Too
I heard the song, that’s bullshit boo!
Cross eyed bastard, fucking with me
You know I’m a G, your boy PT
Riding hard, riding strong
Suck my dick Scrappy, my dick is long
You played me wrong, I’m not the one
Outside of the club with my tucked in gun
You know me nigga, I shoot the crowd
It’s DSGB nigga and I say it loud
I say it proud – fuck BME
Y’all pussy-ass niggas can’t fuck with me!”

While the track’s hard beat works well, Troy’s threats are not fresh in the rap sense because anyone angry enough could probably come up with the same standard obscenities and threats. Thankfully this is the only track overtly dedicated to the beef. Troy does throw in an occasional diss on standard street tracks like “Represent This” and “I’m the Shark in the Water.”

Outside of staying true to his street roots, Troy spends the other part of the album trying to craft another hit for the clubs with limited success. “Pop a Few Bottles” features a less than stellar hook which isn’t as catchy as it needs to be and a beat that isn’t original enough to make it stand out. “I Like All That” suffers from the same shortcomings and while the beat is interesting considering it is a strip club anthem , overall the track is nothing special. “Drop That Ass” is unoriginal and makes it painfully obvious Troy needs some help with the hooks. “Vegas” is interesting as it strays from Troy’s usual synth and bass heavy crunk tracks. Over a soft track with a funky drum beat, Pastor Troy flexes his storytelling skills well and delivers one of the album’s better tracks. “Down For Life” finds DJ Squeeky delivering an upbeat mixture of R&B and club music, but overall the track sounds too much like every other ladies track done by a rapper. The album ends with more predictable tracks dedicated to ladies, the block, and 26 inch rims. Guest spots from Criminal Manne and The Dayton Family’s Bootleg are welcome, but can’t save stereotypical tracks.

Pastor Troy started out as a pioneer of crunk club music but with is latest effort he shows that even pioneers need to evolve to stay relevant. Instead of evolving Troy either makes tracks which are almost identical to those he was making 7 years ago or tries to mimic whatever is popular right now. The formula doesn’t work well for Troy and risks alienating devoted fans. In the end, Troy’s saving grace is his unique and energetic voice, a trait that will ensure he will still have fans even if he doesn’t hit it big again. The problem is that while Pastor Troy’s voice puts him ahead of other cookie cutter rappers out there, he can’t compete with the fresh and original rappers out there.

Pastor Troy :: By Choice or By Force
4.5Disappointing
Music5
Lyrics4