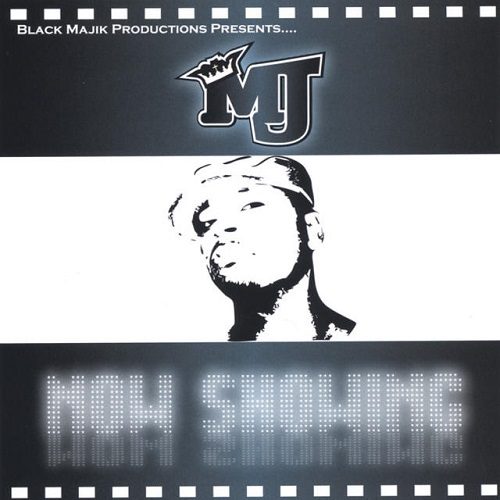 The idea of one’s life as a movie is an intriguing one for many, I think, but the essential question I’ve always had when thinking about it was: would anyone actually want to watch that movie? Truthfully, for myself I’d have to say no, as it’d be a pretty mundane flick; me sitting at the crib, me going to my boring 9-to-5, me riding the bus through the dirty city streets, and so on. Shit, even the sex scenes would be predictable. But at the same time there’s something to be said for authenticity. I’d much rather see a movie that reveals something true and throws the ugliness and contradictions of life in a whole new light than a typical shoot-’em-up thriller any day. MJ, a self-made artist hungry enough to pursue his dream despite rejection from majors and mainstream alike, obviously likes the concept of life as a movie too, as his newest project loosely conceptualizes itself as a cinematic conception, complete with tracks labeled as ‘scenes’ and numerous references to rapper as director and star. Unfortunately, after a very promising intro full of candor and humility, struggle and strife, he seems to succumb to the temptation to skew some details, to glamorize and romanticize. The finished project is a muttly but mostly effective hybrid between evocative honesty and Hollywood effects, partly succeeding as both a true testament as well as a flashy big budget blockbuster, yet failing to capture either completely.

The first track (or scene), “Now Showing,” had me hype. MJ describes his life up to this point, from conception to school to the struggle to get on, with a refreshing tone that isn’t afraid to show flaws. Whether its describing the righteous lessons learned from parents, his early unpopularity (“in school, wasn’t that cool”) and heart break in college (“tears on my pillow”), MJ succeeds because (not in spite of) his everyman attitude. Most everyone can relate to the terrible 9-to-5, the world’s rejection of personal dreams, and the potentially-crippling debt of young adulthood. No Schwarzenegger, he’s a hero you want to root for, despite being “too nice,” with girls not quite hot enough to fantasize over and accomplishments not quite impressive enough to marvel at.

The tracks that follow, to be fair, do keep a lot of that early candor, but occasionally fall into familiar rap cliques of clubbing and player shit, females on the tip, and the occasional tough talk. Whether if it’s your thing or not, much of the album is devoted to the fairer sex, whether it’s finding the right one (“Somebody to Love,”), sexing the skeezers (“Karma Sutra”), or just loving their essence (“Bootie”). Other tracks highlight MJ’s nice MC style, yet despite proclaiming his desire to keep it honest they fail to reveal much more about MJ the man. And as most of the beats have a definite bounce club feel, it’s only appropriate that the topic veers into club shit. That well-worn territory is mostly cleverly done (check the interesting narrative on “Came in the Club with a Gun,” despite the seemingly-ignant title). The production relies heavily on synthesizers, skittery drum machines and cinematic and ominous swoops of melody, and most of them succeed in being fresh and replayable, avoiding redundancy despite the 19 ‘scenes’ found on the album. Point blank, MJ’s got major talent on the M-I-C as well as the boards, handling all the duties with only one guest with gusto and freshness.

So in the end, would people want to watch MJ’s life-as-movie? The answer is complex. As he’s ‘filmed’ it… probably. “Now Showing” has a nice mix of everyday observational honesty and sexy allure. Personally, I wish he would have gone all the way in one direction or the other, either making an artwork either completely realistic or completely sensational. Hell, maybe one’s life really is a mix of mundane and fantasy. As it stands, the experience will leave you pleasantly satisfied but not blown away. As MJ definitely shows he has significant skills, let’s hope the sequel (yes, I would like to see a sequel) will take it to the extreme in either direction.