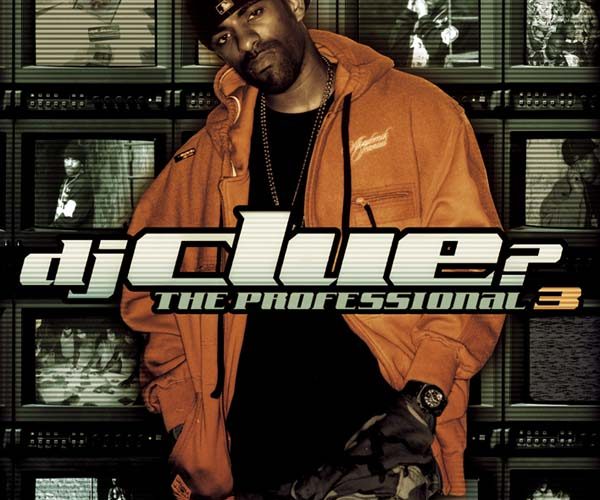 It must be nice to have the kind of clout in the industry that DJ Clue has. Who else do you know can fall into relative obscurity, minus some street mixtapes and awkward hosting duties on MTV’s “Direct Effect” show, and come back with a release that has features from an impressive roster of the very best the rap game has to offer? Nobody. The “Professional 3” had very little promotion prior to its release, as if it was rushed, but hopefully it does not SOUND like it was rushed.

First, DJ Clue is quite admirable as a master of his trade. Some DJ’s that put together compilations absolutely ruin them by yelling all over the tracks obnoxiously, DJ KaySlay to name the most serious offender. However, Clue is up to his standard business on this release with some minor occasional shouts, Clue!, Desert Storm!, Professional 3!, or Haha! that are merely thrown in during down times in the songs. This approach rarely detracts from the overall product.

With the great starter track “War” featuring Nas, you may first come to a presumptuous conclusion that Clue is going to drop another gem-filled mix of material on par with the first “Professional” album, circa ’98. Nas has been en fuego as of late with his cameo on The Game’s album and, more importantly, his stunning solo LP. “War” does not sound like a throwaway verse, but the problem is that it is only one long verse as the song clocks in at 1:57, with the beat riding out a lot of that clock. Here is a sampling of “War” that firmly indicates that Nas deserves the accolades and respect that he has successfully reclaimed:

“Uh, yea, yea Squinted-eye gangsta, live in a skyscraper
Platinum Patron-drinker, stackin’ that grown paper
God pushed me out his nuts
The Devil swallowed me up, I burnt a hole in his guts
Fell down into a Louis Vitton truck
With stashboxes, and niggaz in it sayin’ blast Nas shit
Drove down harm’s way, puffin’ that Bombay
QB thug tattoo on my arm say
Names of my fam, so I’ma read you a scripture
And commandments to get you richer
Bandanas, hammers, MAC’s and nina’s
With the mismatched Pumas, like Shan in Queensbridge
All white shell toes, that’s that Queens thing
Brightland, ice wine, call that weed sling Know where G slang
And the bitches with bomb ass that slurp on me and my comrades
Got a new contract, come on, black
Shit y’all just gettin’ up on, I’m beyond that
No time for crumbs, I really don’t see them
They just started livin’, just started havin’ threesomes
Just started havin’ girls who like them
That’s why I got married ’cause my world ain’t like them
So why they keep tellin’ those stories?
Nigga, y’all square, nigga, this is my year, nigga”

Surely, this riveting verse belongs in The Source’s “Quotable of the Month” section, it’s honestly that hot. The lyrics alone don’t do justice to how well Nas flows over the song. Unfortunately, no liner notes are provided for this track, as it’d be nice to find out who’s behind the really nice battle-style beat.

By the next track, however, you will come to realize the unfortunate truth that not all of these rap stars have brought Clue their A-game. Apparently, when putting together an album like this, Clue notifies the artists with the beat and a general concept and gives them about a week’s notice to prepare something. Therefore, unless the track in question was previously released on the mixtape circuit, they are likely to be rushed abominations. Whatever the case, the siren driven “Clear Da Scene” featuring Lil’ Wayne, Rick Ross and Ransom, follows the stellar opening track and goes down in flames. Lil’ Wayne is a bonafide star with all of the high-profile features that he has been on recently and his incredible improvement over the past few years, but he fails to deliver on this track. Rick Ross is essentially a thugged out parody with lines like, “You straight? I hope your ass is/ I leave your ass as is,” that are delivered in a lazy, mumbling, way.

There are several unnecessary R&B/Rap remakes, like “A Week Ago, Part 1” that finds The Game working with Mario Winans over this DJ Clue produced song. In no way do the two mesh well over the high-pitched piano keys and emotive drum pattern. The Game’s verse is good, Mario Winans singing is as nice as it ever is, yet, the result is a skippable track, because of the extremely contrasting sounds. Then, as if that weren’t enough, we are offered “A Week Ago, Part 2,” which is the same disappointment. Nothing could prepare me for the more disappointing remake though. The usually reliable Jagged Edge and DJ Clue’s flagship artist Fabolous team up for a devastatingly bad remake of Jodeci’s classic, “I Really Wanna Know You”. Jagged Edge sounds almost perverse in their delivery of the sensual lyrics. On a positive note, it should go a long way in reminding artists not to rework classic material. This process innately draws comparisons to the originals.

Sometimes the tracks on “The Professional 3” aren’t the worst thing you’ve ever heard, however, reasonable expectations are put upon artists like Beanie Sigel, Snoop Dogg and Kanye West, who all fail to deliver on their respective tracks. Kanye’s is the best out of these mentioned with “Like That”. “Like That” has a low amp, pitter-patter beat that does not drive the track at all, instead of the vintage soul samples that we are accustomed to from Mr. West. He does provide braggadocious one-liners with his punchline cohort Fabolous, who appears on three tracks in all. The big boys from the South, Mike Jones, Paul Wall and Bun B, get their chance with “Grills & Woman” which sounds like a rehashed “Still Tippin'” without a catchy hook. The hook is of the screwed and chopped variety, which repeats “Southside with the grill and woman, grill and woman” over and over. These joints don’t work unless the chopped lyrics are actually entertaining, or just catchy, this one doesn’t make any kind of sense.

Before this review becomes more hateful than it deserves, there are moments where “The Professional 3” finds its groove again. It is important to note that all of these top-notch tracks that save the album from becoming an overpriced coaster are either solo or from a group of artists that have had much experience with one another, meaning DJ Clue might not be the best in finding a chemistry between established artists unless it’s already there. The anthem, “Ugly (Thug It Out)” has Jadakiss with Swizz Beatz, who offers him his hype man abilities and a sick beat that will make you think you are back in the Ruff Ryders heyday. It consists of a synthetic bag pipe, as ridiculous as that sounds, that carries through the snappy cymbals and marching drum pattern. Cam’Ron and Juelz get their Dipset goodness on with the epic sounding “Middle Finger U”. Styles P goes hard on “The Animal”, even though the beat is considerably less grimy than The Ghost’s typical stuff. Fabolous gets it right for once with “Da Boss”, that is on the “Breathe” tip, but slightly less spectacular. And “Giantz of NYC” is the only big-time producer track, Heatmakerz, that brings you some more of that M.O.P. pump-up music. So, on occasion the listener is provided with ample heat.

The doubtless highlight of the disc brings Mobb Deep back to “Hell on Earth” form. After signing with G-Unit and releasing a relative dud under the label many thought it might be long over for Prodigy and Havoc. On “The Gold” they bring back that brooding QB gangsta shit. It is the tightest of Clue’s self-appointed production work on the album. The vocal sample on the track has a vintage sound of a lovely voice repeating “Shimmering…Glimmering…That’s the gold” over a handclap. It is an achieving track that reaches a status no less than the name it goes by. Hopefully, they can maintain that standard and release a full-length that is so energetically charged.

Overall, you will find yourself with mixed feelings about DJ Clue’s, because it is such a mixed bag of material. It’s not nearly as good as the original “The Professional” album , nor sadly, “The Professional 2”. Does it sound rushed? Absolutely. It is probably no more than a paycheck album that Clue composed for personal benefit. It goes to show that someone with tons of clout in the rap industry can call his all-star friends up for a go around, but they are only as good as the game they bring.