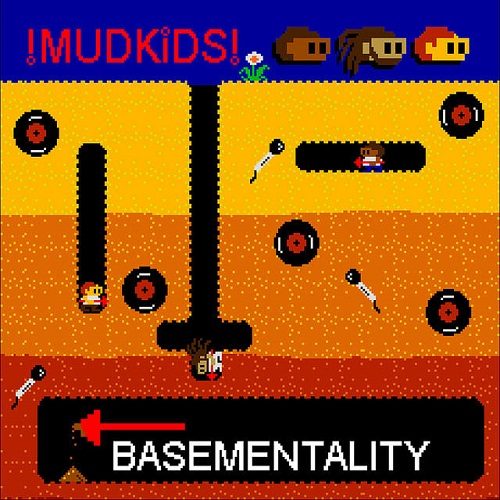 Console games aren’t what they used to be. Don’t get me wrong: the monster battle bosses have become more versatile and ferocious. The storylines are way more enticing and complicated. And the gameplay will blow me away when I do get a chance to play. But sometimes, I long for the good old days. Shooting turtle shells at my friends. Looking for that one special sword to battle that one crappy monster. Lazy afternoons with the curtains closed to discern the badly animated characters.

The Mudkids from Indianapolis gave me these NES flashbacks before I even played their promo copy of “Basementality” in my mounted laptop CD drive. The animated cover showing three little old school Bomberman lookalikes, burrowing for records and microphones underground. The pixel rate of the muddy background even lower than a Latin limbo professional’s lowest. The inside of the jewel case showing a hand drawn arcade machine with two buttons and one joystick.

There must be something in the 2007 air smelling like nostalgia. Pharoahe Monch is making his long-awaited comeback after dropping his last and only solo album in 1999. Psycho Les and Ju Ju are in the studio for some new Beatnuts panty raiding. You can hear people on New York street corners whispering: “The Wu is back.” And our own Adam Bernard found out in an exclusive interview that Grandmaster Caz is dropping a new album sometime this year.

You may or may not have noticed, but the Mudkids are also comeback kids. The three original musicians, now assisted by DJ Helicon, have been dropping albums since 1998. After their third installment “Higher” in 2001 they must have lost faith in getting their music out to a bigger audience than the local Indianapolis scene. Maybe front man MC Choc Soreel AKA Rusty Redenbacher decided to rejoin his rock group with the inimitable name “Birdmen Of Alcatraz.”Maybe he gave his DJ’ing career another spin. Or maybe he and the other two members got involved with the new generation of console gaming with the XBox and the Gamecube.

Fact is, the kids got tired of playing computer games, and got back into the music game. Here is what Choc Soreel has to say about their comeback on “Never Givin’Up.” Sidekick Big Skittz plays the little devil on the left shoulder (text between brackets):

“(I want to quit this game)
It seems to make a hit you have to spit with ridiculous plains
(I need a platinum chain)
Come on, I need to let you know how it was when I used to bang?
(I never lived like that)
And if I did, I can guarantee I wouldn’t be here with the Mudkids
(We might never get rich)
Ain’t that a bitch, but these words gotta get out, because they are making my brain itch
(Maybe I will cut my hair)
Maybe I will go 9 to 5, instead of noon to noon talking about: keep it live
(Gotta pay this rent)
I’ve been rhyming for years, but lately it seems to fall on deaf ears
(I am not trying to quit)
Just keep it moving, can’t see the bottom, gotta get to grooving
(I want to quit this game)
I can’t seem to, this game is what I know and where I live my dreams through
(Don’t you want that Benz?)
YEAH, but I like out to hang out and hustle with my friends
(Don’t you want dem ends?)
YEAH, but I got to set my own trends”

Back to flashbacks. The Mudkids reminisce of the good old days of early nineties hip-hop while sounding like they are from those days themselves. People Under The Stairs from Los Angeles have made their dusty breaks part of their signature sound. If the LA P.U.T.S are dusty, the Mudkids have a marshy sound. Their bass sounds muffled, the samples sound slightly off-key, and the drums have a wet ‘splash’ rather than a dry ‘tick.’ Choc Soreel, the charismatic leader of the musky wolf pack, alternates goofy battle lines on “Basically…. The Intro” (“You’re the last of an eighth of a bag of shake/ I’m nine long hauls of chronic making the dome ache”) with passionate pleas for his beloved music, like a tribute to the deceased Jam Master Jay. Choc’s charisma defines a big chunk of the Mudkids’ charm. They would be lost in the dark without him.

After fighting monsters and scavenging treasure back in the good old days, my eyes would start to hurt from staring at old school pixels. The compelling theme song started to get repetitive. I needed to leave my hideout for some fresh air. After listening to the Mudkids for seven or eight songs or so, I had that same sensation. Their love of the music is genuine, but I miss a fresh element that puts them on the next level. Maybe the group is leaning too much on Soreel’s balanced flow. Like those old school computer games, it is great to listen to this Indianapolis crew, but only for an afternoon.